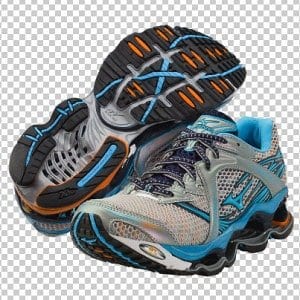 With a tagline of “a ride like no other” the Mizuno Wave Prophecy set the expectation bar quite high. I hadn’t done a lot of research on these before I opened the box, but with the price point (at nearly $200) and the marketing behind them, I almost expected to open the box and the shoes would just start running for me. My initial reaction was a bit overwhelmed. I was stunned and in awe at how much engineering and technology these shoes seemed to have just from a quick glance at them.

The Wave Prophecy has a noticeably different look than nearly every other running shoe I’ve seen on the marketing. The hard plastic layer with visible openings, very little “midsole” cushioning, and the distinct wave technology certainly make these shoes stand out from the crowd. 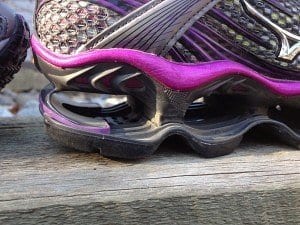 Once I finally slipped my feet into the Wave Prophecy I was surprised by the fit and feel. The uppers were snug and seemed to give and take in different (opposing) places as my foot moved throughout my slow investigative steps. The uppers felt like they had a bit of stretch built into them to keep them evenly snug all over without having to cinch down the laces too much. Once I did my research on the technology that these shoes had, it was clear that this was the Dynamotion Fit. 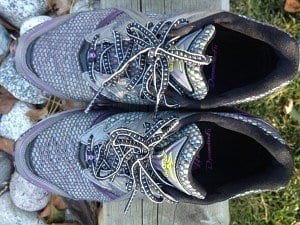 For me, the toe of the show seemed to turn up a bit more than what I am used to and then flex down as I stepped forward onto the shoe, both in a running and walking gait. This actually ended up causing me a bit of irritation in the front my toes on longer runs. The length of the shoe was perfect, so it wasn’t caused by rubbing on the front of the toe box. This curve and flex that I felt is likely what Mizuno markets as the smooth ride technology. 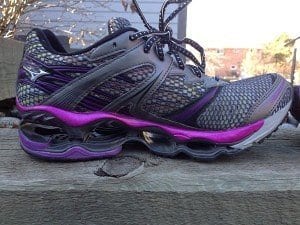 While the Wave Prophecy falls into the cushioned shoe category it was not soft, pillowy, or squish at all. It was firm, responsive, and offered a lot of rebound without being harsh. I was surprised by how evenly dispersed the force seemed to be given how stiff the wave plate was and how little actual cushioning in the form of a traditional EVA midsole there was. Again, this is the point behind Mizuno’s wave technology, but I didn’t want to have any biases, so I hadn’t read up on it prior to running in them for several weeks.

I have a (mostly) neutral stride and I have worked hard to become a more natural midfoot striker and, over the years, it has made me a more consistent runner with fewer injuries. I did not feel that the Wave Prophecy supported a midfoot stride. I felt that it was easier for me to slip into a heel strike, even from the beginning of run while wearing these. I also noticed that the smooth responsiveness was much less apparent when I was midfoot striking. This could have been due to a more built up heel or greater heel-toe drop, but I could not find what exact specs are. 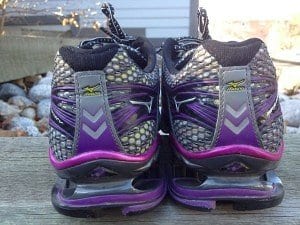 I found that the Wave Prophecy was better suited for more moderately paced runs. When I picked up the pace, I found it even more difficult to find the “sweet spot” on each stride and found that the quick rebound made my stride feel a bit awkward when I started turning over my stride more rapidly.

The Wave Prophecy sits fairly high off the ground and, for how tall it is, had a relatively narrow base. I felt completely stable on flat, paved surfaces, but when surfaces became a bit off camber (on road shoulders) or uneven (cracked sidewalks, crushed stone) I started to feel uneasy with each step, fearing I may turn an ankle. This was also the case making sharp turns or quick direction changes. I think the very hard plastic midsole played a role in this because it didn’t allow the shoe to flex around anything that I stepped on, but rather forced the entire shoe to move to accommodate. 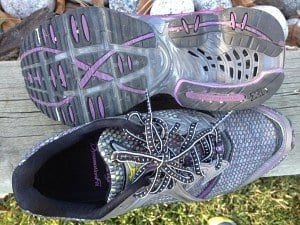 For all that it offers in cushioning and technology, the Wave Prophecy doesn’t add weight. The women’s version weighs in at 10.8oz which caught me by surprise. Although I have only had the Wave Prophecy for a couple of months, I think it will be an extremely durable, long-lasting shoe.

Overall, I found that the Wave Prophecy performs more or less as it was designed to. I can see it being a great shoe for a neutral runner with a tendency to heel strike that wants to put in long miles on hard surfaces without feeling the effects of those miles over time.

For more info on the Wave Prophecy and other Mizuno footwear, visit www.mizunousa.com.