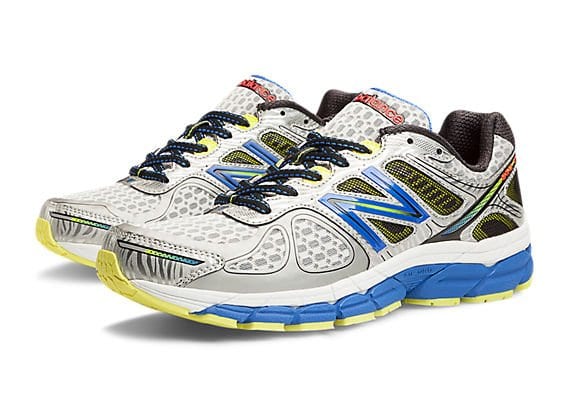 New Balance has a style of shoe to fit every style of running, and every type of runner. The New Balance 860V4 is a stability shoe made to protect even the hardest foot strikers, whether Clydesdale or Athena (I still think us guys got totally gypped on that name thing). While other companies shunted all of their R&D efforts to the latest “Barefoot” craze, New Balance (being an equal opportunity running company) kept their R&D hard at work on their entire shoe lineup. Thus we have the New Balance 860V4, which is not only lighter and faster than most of it’s competition in the stability shoe market, but also more comfortable as well. 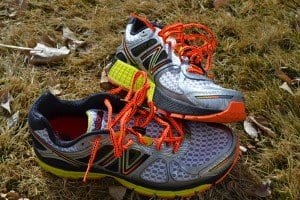 This is actually the fourth iteration of the 860 that I’ve tested (check the 860V3 review here), and it’s really awesome to see how they constantly manage to update and improve up this specific line of shoe. Right out of the box, it was easy to see that the New Balance 860V4 went through another overhaul. The color palette and styling, which was updated for the 860V3 and remains much the same for the 860V4, is nonetheless pleasing to the eye and still sharp. Who says that a stability shoe has to look like one? Right out of the box, it was also easy to tell that New Balance had managed to drop weight from the shoe. Per the New Balance Website, the shoe weighs in at just 10.8 oz, which is definitely on the light side of things for a stability shoe. This cuts over an oz per shoe off of last year’s offering, and I have to assume most of that is lost in the new midsole (more on that later). The lacing pattern remains the same with double gusseted lace holes to keep your foot firmly secured during runs, and it rounded out by a plush tongue which matches the height of the rounded heel cup. 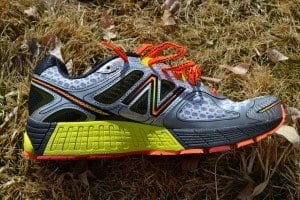 The stability portion of the shoe shows through in the outsole design, and account for the 12mm of drop in the New Balance 860V4.

What was also immediately different from last year was the feel of the shoe. In slipping the shoes on for a quick jog around the block right out of the box, two things were immediately apparent: first, the upper on the New Balance 860V4 was much more comfortable this year and second, the feel for the pavement was much more accurate. Last year’s iteration was overly cushy – so much so that every foot step felt just a little unstable. This feeling is completely gone in the New Balance 860V4.

My testing phase on the New Balance 860V4 included runs of varying purpose and length. I ran in them distances of up to 6 miles which included tempo training runs, sprint training runs (on both track and pavement) and distance runs at an easy pace. As mentioned above, I was very impressed by the sure footed feel of the shoe; this did not diminish in speed or tempo workouts. This sure footed feel for the ground is largely due to the midsole/blown rubber outsole combo. The midsole on the New Balance 860V4 is Acteva Lite, which is up to 25% lighter than last year’s midsoles. It strikes a good balance between cushioning and feel, and was pleasant to run in throughout the testing phase. 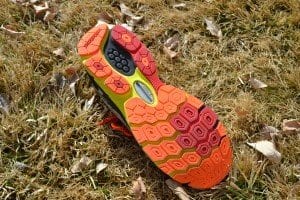 The blown rubber outsole accounts for much of the great feel for the road in the New Balance 860V4.

The upper on the New Balance 860V4 was also another standout in the testing phase. New Balance combined two of their upper options (full stitched and full no-sew, or one piece) to make a shoe which not only holds your foot firmly in place, but feels almost like a second sock on the inside. The stitching was performed in order to enhance the secure feeling of the shoe, and is most probably due to the fact that Stability shoes are normally marketed at heavier footed runners. Once again, the combo was a great alternative to past iterations. The PL-12 last is also an update on previous models, and will fit on a variety of runners as it is secure in the heel, but slightly roomy in the toe box. This will easily accommodate several different types of foot shapes easily. 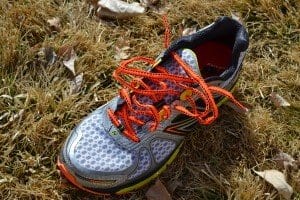 The upper is one of my favorite updates to the New Balance 860V4.

Clydesdales and Athenas will love this years New Balance 860V4 due to the combination of stability and speed. It combines just the right amount of cushioning while not sacrificing feel for the road, and comes in two attractive combinations. Priced at just $114.99, it’s a great option for those needing this type of pronation control regardless of skill level. For more info on the 860V4 and other New Balance footwear, visit www.newbalance.com. 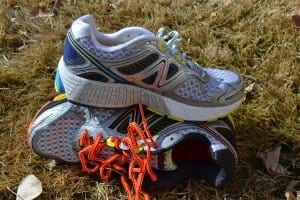 The color scheme for the women’s New Balance 860V4 (on top of the men’s version) is fresh and lively.

There is no doubt that at first glance these shoes look like a women’s stability shoe, but with a cheerful color scheme and design the women’s New Balance 860v4 are a surprising addition to the generally neutral palette of stability shoes. The construction of the women’s New Balance 860v4 uses NB’s T-Beam technology in combination with high-density EVA foam and ABZORB® Crash Pad to provide stability for overpronators.  Additionally, the 860v4 incorporates Ndurance rubber outsole to endure wear and tear on those long runs.

Generally, my preference is to run in neutral shoes, however the women’s New Balance 860v4 was a surprise to say the least.  These shoes were not clunky to run in and were both lightweight and comfortable.  Weighing in at only 8.8 ounces (for a women’s size 7), these shoes were surprisingly lightweight, but provided incredible support and comfort, doing what they were designed to do and doing it quite well. 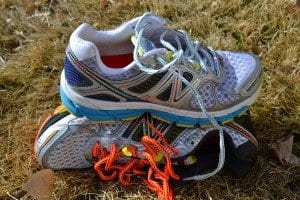 My favorite attribute of the women’s New Balance 860V4 was the feel of the upper – no hotspots/blistering even right out of the box.

If you looking for a stable but lightweight shoe with feminine touch, the New Balance 860v4 would definitely be worth a try. With a standard heal width, instep height, toe box depth and fore foot width, these shoes felt great right out of the box. I especially like the new upper which ultimately provides less potential for friction due to the combination construction. Additionally, for such a substantial shoe, it felt bouncy and ready to go from the first time I laced up. These shoes were great for long runs and high mileage weeks; they not only provided the protection to soften miles of pavement, but helped reduce leg fatigue as well. For more info on the 860V4 and other New Balance footwear, visit www.newbalance.com.