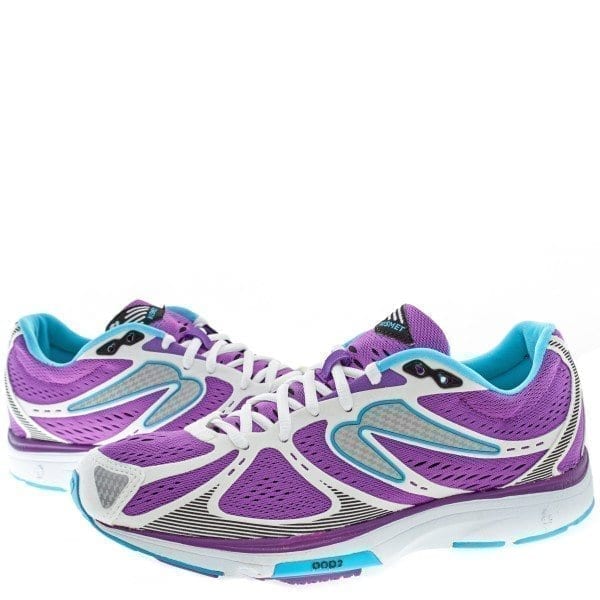 For a female runner who changed her running form 4 years ago, the Newton Kismet Core Trainer is a natural shoe choice for a forefoot runner looking for metatarsal support with every strike of her foot. Traditionally a runner who likes the stability shoe this Newton shoe has some new features added to the core stability trainer I have been used to running in such as the 5-lug P.O.P. 2 (P.O.P. = Point of Power) platform introduced in the Newton 2014 line of footwear.

First Thoughts on the Newton Kismet

Definitely my first thoughts on the Newton Kismet Core Trainer were the bright colors, the 360 degree reflectivity and the heel lace lock.  These shoes were mainly for my shorter weekday training runs given their slightly higher weight at 8.2oz. as opposed to the 6.9oz. Newton’s I have been running in for the last year.  However, after taking the Newton Kismet for a few shorter runs I quickly learned I didn’t actually feel the additional weight and decided to try them out for a longer weekend run to see if this was actually true (and it did!).  So the Kismet Core Trainer has transformed into my training shoe and my lighter Newton’s will be my racing shoe hoping to decrease a little weight and add to my speed and a PR for an upcoming Half Marathon. 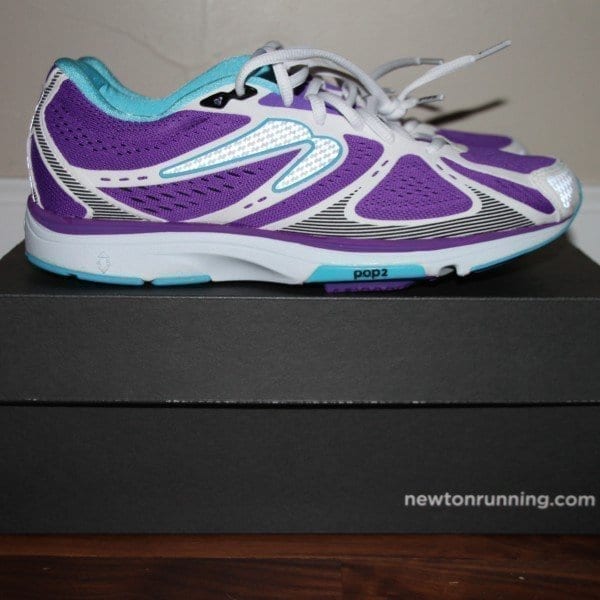 Upper of the Newton Kismet

The Newton Kismet is a Core Trainer that is a go-to shoe for everyday.  It is versatile, balanced, stable and responsive for those in need of some stability in their shoe.  The Newton Kismet has a seamless engineered mesh upper for good breathability during training.  The colors of the model I tested are bright and feminine, which is an important feature for this female runner, mainly purple and white with teal accents and of course the traditional Newton logo.  The 360 reflectivity is highlighted even more with the white trim which is an important feature for those of us who mainly run during the workweek at dusk or darker hours.  And finally an important feature of the Newton Kismet is the heel lace lock, pictured below for extra stability and preventing heel slippage during your runs. 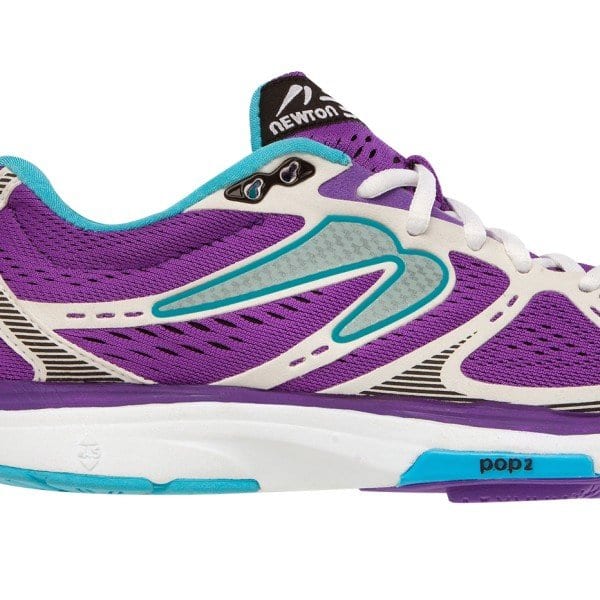 The outer sole of the Newton Kismet is what makes Newton Running unique.  The winner of the Fall 2014 Fortius Media Group, LLC Best Shoe award for Performance the Newton Kismet is an entry shoe into Newton Running’s open-chamber Action/Reaction technology.  The 5-lug P.O.P. 2 platform has 3 lugs that are beveled and articulated surrounded by 2 lugs which are static to create a broader base for the forefoot runner.  The Newton Action/Reaction technology is found in the lugs which engage and absorbs impact activating a trampoline effect to add spring to every step.  Being a forefoot runner and a long time wearer of Newton running shoes I welcomed the 5-lug platform as opposed to the previous 4-lug system which made the forefoot somewhat unstable with each step of a run.  I also have noticed the wear on the 5-lug P.O.P. 2 platform is also longer lasting. An important feature to a runner such as myself which will run my shoes nearly 500 miles and often use these lugs to determine when a new shoe purchase is necessary.

Technical Specifications of the Newton Kismet 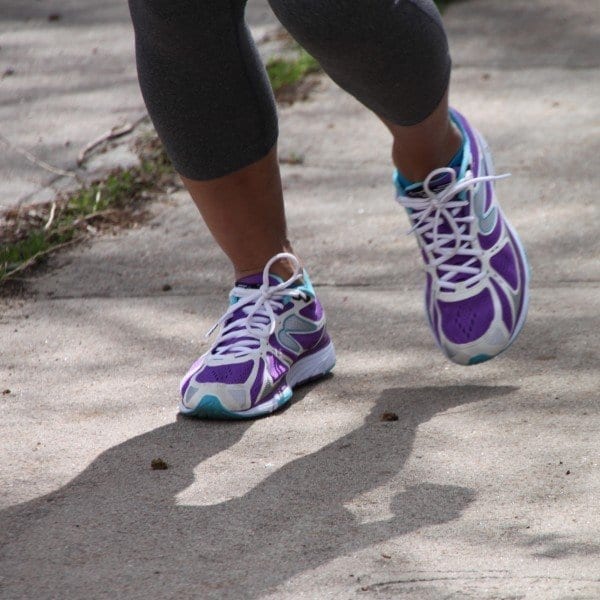 Taking the Newton Kismet to the Denver streets.

The Newton Kismet took to the streets and sidewalks of Denver for runs anywhere from 2 to 10 miles, ran the bike paths in Summit County and also came with me to a conference in Hollywood (Florida not California) and some quick runs between sessions and in that Florida humidity! These shoes packed and performed well truly living up to “the go-to everyday running shoe.”

My first run was actually not that inspiring and I was considering “throwing in the towel” as the heel lace lock feature really did “lock” my heel into the shoe too much so, causing some foot and ankle pain.  Initially thinking the shoe size was also too small which didn’t make much sense since I have run in and was currently running in another pair of Newton Running shoes, I ended up loosening the laces halfway through that 5 mile run.  This almost immediately corrected the issue and I can also now report that the Newton Kismet run true to size.  As far as the heel lace lock feature as the shoes got more and more broken in I noticed I didn’t really have to be as conscious in how “loose” I was keeping my laces anymore.  I would definitely suggest a “break-in” period for the Newton Kismet and keeping those laces a little looser in the beginning. 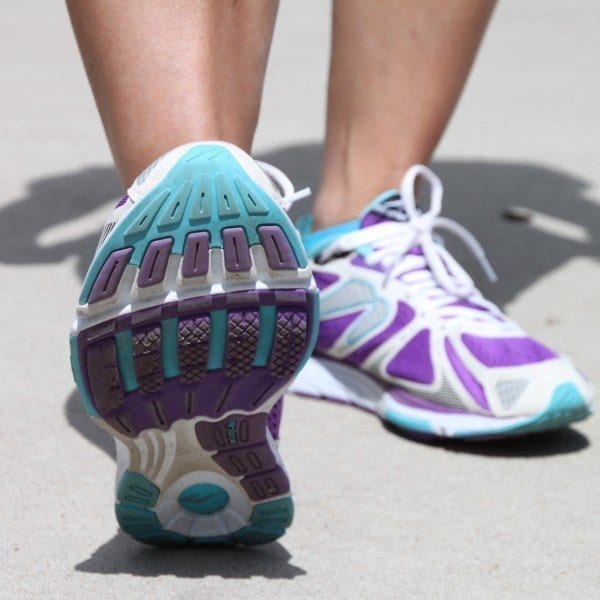 As previously mentioned after taking the bright new Newton Kismet shoes out of their box I intended them to be solely for my weekday running given their “internet” description on Newton Running as the go-to, everyday running shoe.  At the time I actually didn’t know they were slightly heavier than my current Newton Running shoe.  After a few runs I felt as if they were actually lighter and decided to take them to the streets and gravel paths for my weekend long run.  Again after a longer run of 10 miles I didn’t feel their slightly higher weight and really enjoyed the overall stability of the shoe.  The 5-lug platform and the entry level Action/Reaction technology with the static outside lugs added extra stability in this shoe that I welcomed on my longer runs when my form can get a bit unstable towards the end.  Being an over pronator I tend to have pretty sore medial ankles after my long runs however I have noticed that after running in the Newton Kismet my recovery time is much faster and I have even been able to get in the occasional back-to-back run on consecutive days which isn’t always possible due to some usual tendinitis in my posterior tibialis and plantar fascia.  So given I now know they are just slightly heavier than my other Newton running shoes I have decided to race in my slightly lighter Newton Running shoes and primarily train in my Newton Kismet Core Stability Trainers. 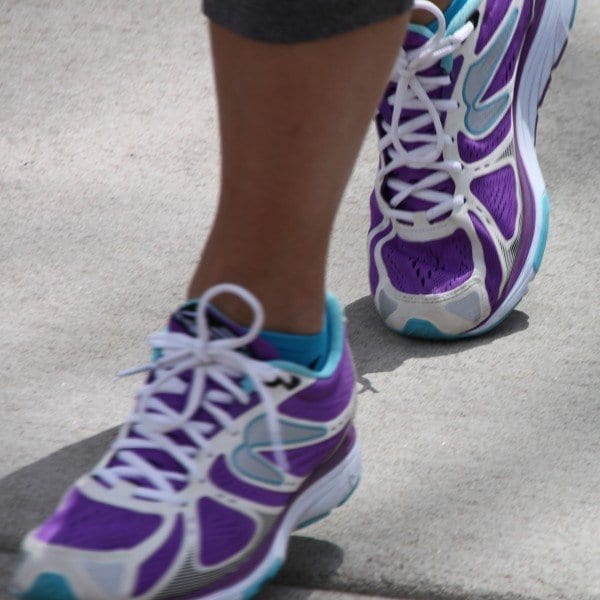 Rarely do I wear my running shoes for everyday errands or walking but I just love the colors!

Final Thoughts on the Newton Kismet

As a transformed forefoot runner who has dealt with a myriad of knee injuries and once nearly “hung up her running shoes” a good stability running shoe is important in my world of running.  The Newton Kismet is a great core stability trainer for the everyday runner as well as those training for their next marathon.  The versatility and balance of the shoe is shown in it’s performance both for short and long road running for those who run for fun and those who are training for their next race and PR.

I am primarily a runner, anything from the local charity 5K to the Marine Corps Marathon. I love being outside and running ANYWHERE in the world and have run in China, Rwanda, Australia and all over the USA. I enjoy traveling as well as working in the non-profit community.