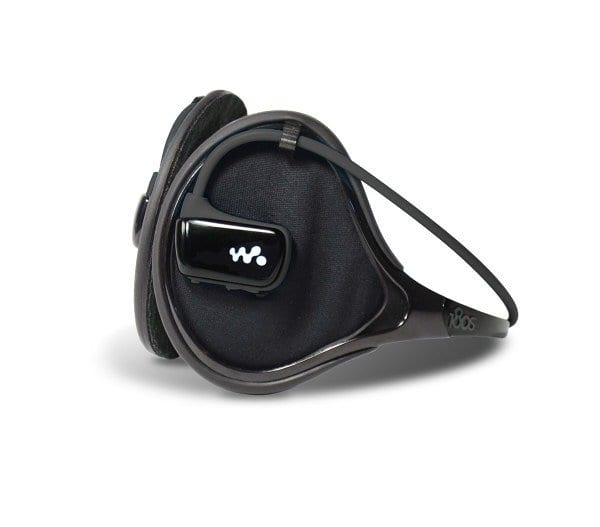 The original Sony Walkman was introduced in the 1980’s and I may or may not have owned one of of them…hey they were cool for an 9 year old kid. Let me just say that Sony has made quite an improvement since that time. Welcome to the present. Sony and 180’s have teamed up to make a cool or should I say warm combination of music and weather protection. Let me introduce you to the 180’s Exolite Groove with Sony MP3 Player, an all weather, cordless, one-piece wearable sports MP3 player. 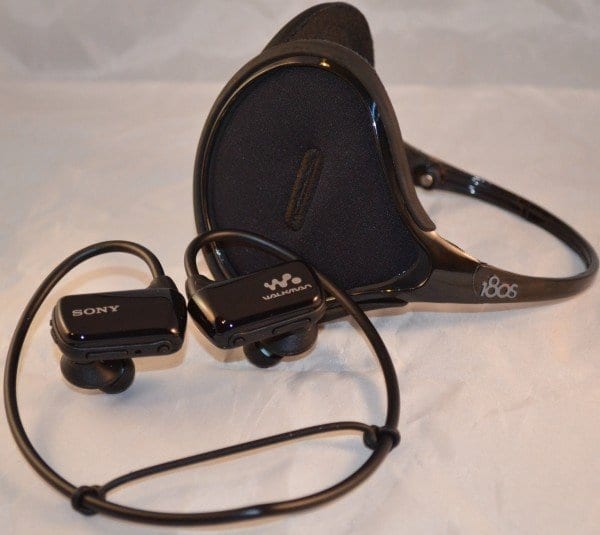 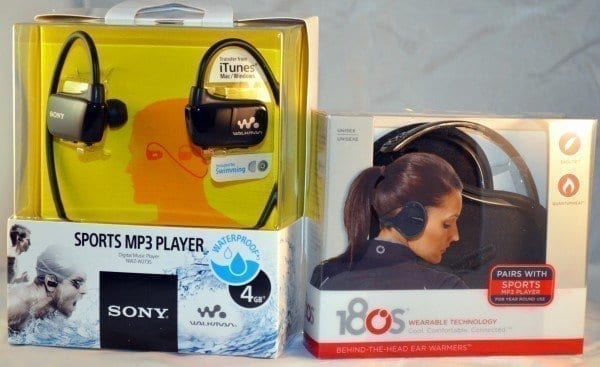 Let’s dive into the details.  While Sony claims that there is 4 GB’s of storage, there is actual only 3.22 GB’s, once you count their software and other items stored on the headphones. For most of us that is more than enough space to copy some songs to. I was able to stuff the headset full with just over 500 songs, and you might be able to get more or less depending on length and quality.

The process of transferring them to the headset is quite simple. Plug the USB charging unit with the Walkman connected into your computer (Mac/Windows), go to the Walkman icon and drag and drop song files into it, voila, you are ready to listen to music. You can go further and install Sony’s third party software, for Windows it is MediaGo and Mac it is Content Transfer, both of which work rather well, but takes a little time to get themselves together after finding your music files on your computer. With the Sony Walkman you are able to load just about anything that has an audio format from mp3’s to podcasts to audio books. 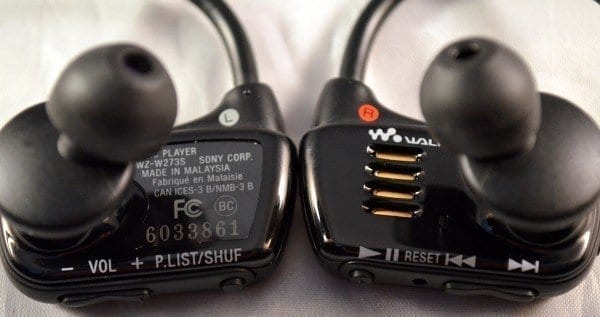 Close up of the earbuds and the control buttons 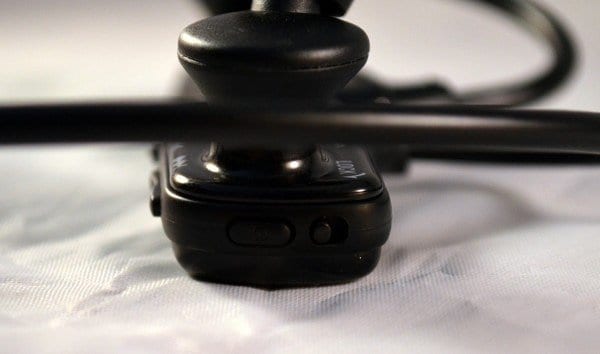 The sliding lock switch and the on/off button

Here is the sweet spot with this headset; If it is drop dead uncharged, Sony states that you can plug it into the charging port and within 3 minutes you will have an hour of play time. Which for me is falls within most of my short runs, who wouldn’t love that? So I tested out this ridiculous statement. I set a count down timer for 3 minutes, plugged in the headset, tossed on my running shoes, jacket and filled up my water bottle. Ding! the timer is done and the headset has it’s “60 minute charge”.  Grab the dog, throw on the headset and out the door I went for a run. When the 40 minute mark rolled around, I was honestly surprised it was still playing music. In the back of my mind I had bet on it dropping out a little after 30 minutes. As I neared the 60 minute mark in my run, the tunes were still playing, I couldn’t believe it. The headset finally decided to give up at the 64 minute mark, incredible. What an absolutely useful feature, for those of us that forget to charge our electronics. Sony says it will take a full charge in about an hour and a half, I timed it at just over an hour and 21 minutes (I was using a wall charger). One other nice feature that the Walkman has is the operation light. When the headset is charging it lights up red and turns off when fully charged. The light also blinks green while in use and will turn to a blinking red when the headset is in need of charging. Play time is listed at over seven hours, when fully charged. My test came out to just over eight and a half hours (tested at room temperature, low volume and no pushed buttons). 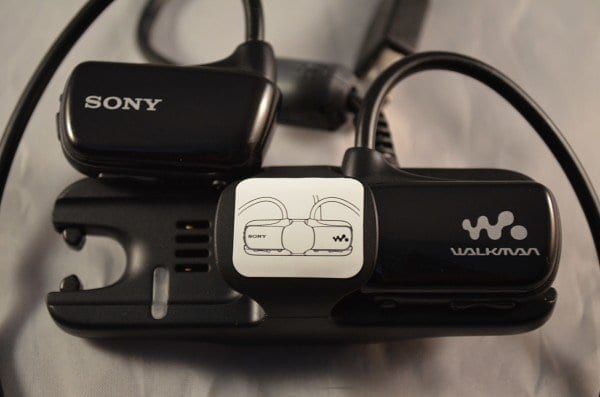 The wear-ability is great , ONCE you get the headset adjusted to your fit. The Sony Walkman comes with eight sets of ear buds, 4 for swimming (that contain a thin film in the earbud hole to keep water out) and 4 for everyday use, both in small, medium, large and extra large. My first attempt at a fitting I used a medium on my left ear and a large on my right, sometimes you have to think outside of the box, go with what is comfortable and feels right. The earbuds felt perfect and blocked out just about all background noise, the high and mid tones were absolutely crisp and clear. The bass or the low tones were not on the same level, which is due to the fact that this is a waterproof /sealed unit. Don’t get me wrong the music/audio quality is definitely good and a pleasure to listen to.

With the ear buds set, it was time to get the headset adjusted to my head. The Walkman has a rubber adjustment band on the back that is supposed to be adjusted to the back of your head to secure everything in place. For the life of me I could not get it to hold, I would slide the piece of rubber up on both sides of the headset wire and it would proceed to slide back down. The rubber adjustment band feels like an after thought to me, so I decided to just take it off, and lo and behold the headset works and feels comfortable without it. Inserting the headset into the 180’s is easy, push the ear buds through the hole and clip the wire into place and you are ready to go.

With everything adjusted just the way I wanted it, it was time to take them out for a run and see if they could keep my ears warm and play some quality music. The day was perfect to give the 180’s a run for their money, it was 4 degrees with blowing snow and a wind chill in the negative teens. As I started the run I was pleasantly surprised at how the 180’s tamed the wind and kept the snow out. The music on the other hand was not so pleasant, with every foot fall I would get an echo of it in my ears, I could still hear the music, but there was a micro-phonic effect happening. What the heck was going on? And then I had my Light Bulb Moment! The headset is waterproof, which means it is a sealed unit, nothing in and nothing out. With choosing such tight fitting ear buds I had created an air tight echo chamber in my ear canal. Most headsets have vents or small holes in them, to alleviate this problem. Is that the trade off for the waterproofing? No, just more adjusting, on this particular run, I just pulled the ear buds out of my ears until the seal released and let them rest just outside of the ear canal. I turned the volume up a couple of clicks and continued my run. For the rest of the time I was able to enjoy my music without the effects of an echo chamber. 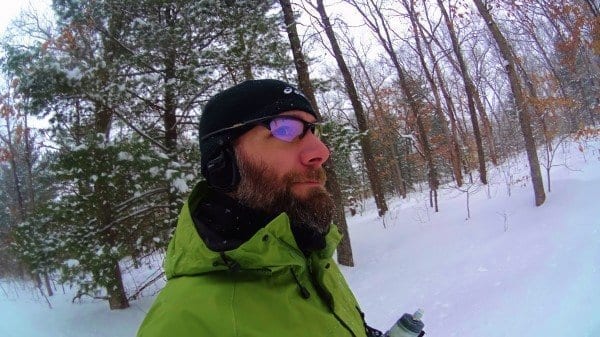 180’s Exolite Groove with Sony MP3 Player out on the trail.

With the ear buds sealed air tight, it is great for eliminating background noise and there are a couple of situations that I prefer them just that way. If I am working on my computer and want to sink into my own little world and have everything in the background melt away, they are great! I wasn’t able to test them on my bicycles because of weather conditions,  however I was able to ride on the stationary bike with no echo effect. And I am absolutely convinced that with the 180’s this will be the perfect headset for early spring and late fall long rides. The tight seals also work great for weight lifting, helps the Walkman stay right where it needs to and blocks out all distractions. The key is if you are going to do an activity with gentle/easy to little or no movements then seal them.

I tried three different ways of adjusting the earbuds for running and they all work well, it really depends on personal preference as to which one will work best for you. The first way I mentioned already, have the ears buds set just on the out skirts of your ear canal, as to not make a seal. This way is definitely helped out by the 180’s as they hold them perfectly in place. The second way, and this will depend on ear sizes, is to replace the current earbuds with the smallest bud sent with the Walkman. These were small enough that the did not create an airtight seal, but still sat nicely into my ears. The last way and this one takes some playing around with, is to minimize the space in your ear canal, a better and deeper seal leaves less space for the earbuds to jiggle, decreasing the echo effect. Once I figured out the fit I was finally able to enjoy them. 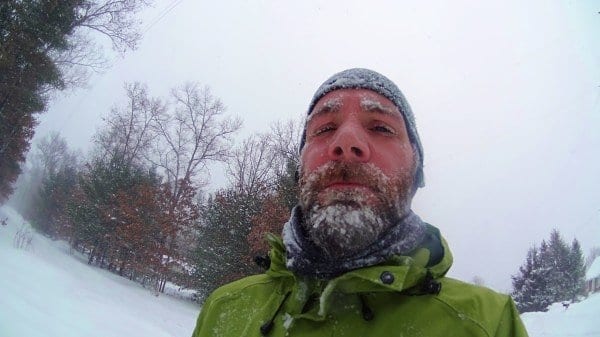 So, Sony says this thing is a waterproof headset that you can swim with? Well, how the heck is a guy in Michigan, in the winter, when everything is frozen, going to test that? First let me tell you, there is no chance that I will ever pay money for a gym membership, the outside is my gym, year round. First things, first, get the swimming ear buds installed on the headset. Simple and easy process, pull off the everyday ones and slide on the waterproof ones, making sure they go on straight and seat into the little grooves. To my conundrum, how to test this headset and make sure it works under water. Hmmm….cold rain/sleet/snow…yep I did that and they work great(although without the waterproof earbuds). Hey how about a shower? Sounds like a good first step to testing anyway. After putting the headset on I noticed that the volume was severely dampened, the extra seal in the waterproof ear buds had dropped the volume by at least a third. However there was still plenty of up volume to make up the difference. The shower was a pass, however the Walkman did not improve my shower singing ability. But this doesn’t quite feel like enough. How about a polar plunge? Sure, however the time spent in the water, would not prove a thing. So, I went to the whirlpool tub, turned on the jets (hoping to simulate swimming movement) and dove in. I could hear the music just fine and the headset was still operational after my “swim”, I would say that is a win. With swimming it is imperative that you get a good seal with the earbuds as to not allow water to seep in. 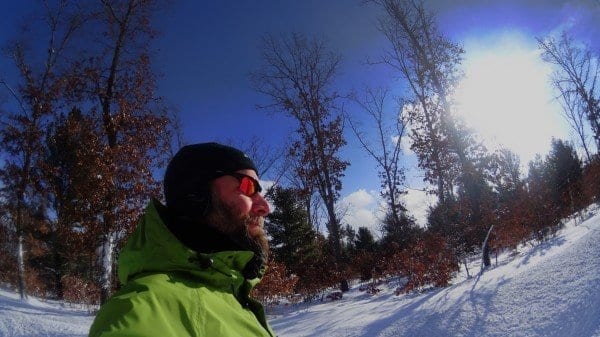 The big question is; do 180’s keep my ears warm and let me listen to music? Absolutely! At first, I thought that there is no way this thin material on the 180’s would do the job, however after taking them on many cold winter runs (air temperature of -18, wind chills into the -20, wind gusts of 35 mph), they more than did the job.  I was more concerned with my water bottle freezing up, then whether or not I was wearing a headset. Normally I wear the OR Windstopper hat to keep the Michigan wind and cold out, but if I want to listen to music the 180’s are the way to go.

The 180’s Exolite Groove with Sony MP3 Player is a perfect pairing for the active go-getter and an absolute must buy combo if you live in the colder environments. They will keep your ears warm while filling them with musical bliss.

One Size Fits All