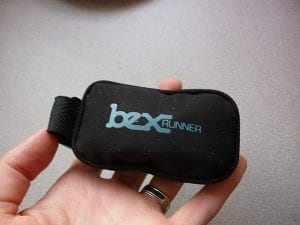 A cool core is a must for all exercise – without a regulated core temperature, we see fatigue, exhaustion, and eventually collapse. This is evidenced in numerous sports, and we’ve all seen the video tape in which the athlete crashes just yards from the finish, unable to complete the race. The guys over at cool palms have taken a mixture of science and exercise and created a device they call the Bex Runner – short for “better exercise.”

The science behind this is as follows – certain parts of the body tend to radiate heat when we exert ourselves. The back of the neck, the top of the head, the mouth, and also the palms of your hands. Much like a dog panting, these areas of the body are places in which we let off heat in order to cool our core temperature down. When our body is well hydrated and cool, we are able to perform under exertion for a longer period of time. But just how do we keep our body temperature down in even the hottest of conditions?

The people at Cool Palms believe they’ve found the answer – the Bex Runner. After letting it chill in the freezer, just strap this little guy onto your palm for any intense exercise, and hit the track, gym, or road. The body’s natural cooling process (blood flowing outward to the palm is warm; after releasing heat, blood flowing back to the body is cooler) will take advantage of the position of the device and keep your core temperature lower.

Strapped and ready to roll

We tried this device on numerous occasions, in numerous climates. From hot days at high altitudes in the Rockies, to blazing heat midsummer in Dallas, Tx, we used the Bex Runner to cool down our core temperature and keep us moving. It’s solidly constructed, with a heavy duty velcro strap which is used to secure the device to your palm. The neoprene cover keeps the gel from being too cold, and keeps the gel from getting too hot too quickly. It worked so well that it stayed cool for over an hour in intense heat. We kept the gel in the freezer overnight, so while we didn’t find a minimum amount of freezer time needed, we never had a situation where it got warm before we did. 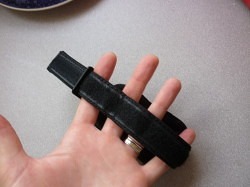 As for a cooler core, we can’t say that for sure. We don’t have all of the sophisticated machinery that Bex does, and even if we did we don’t have any guys in white coats to interpret it. We do know we certainly felt cooler than normal, even on long runs. Thankfully, the guys who made Bex did all the work for us, and have put all the info up on their website. So if the review doesn’t convince you, jump on over to their site www.betterexerciseexperience.com, and read all about it. Afterwards, pick up a bex runner. It may be unorthodox, but it just may be the best way to beat the heat.