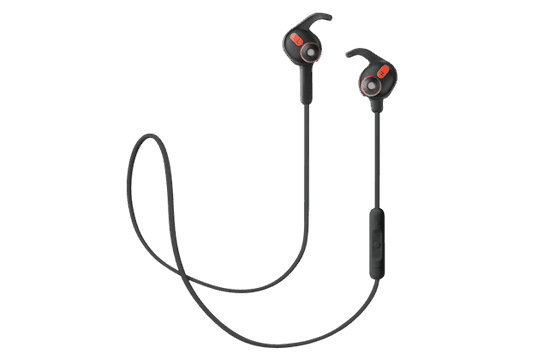 The Jabra Rox Wireless is a set of bluetooth headphones that are designed to be durable enough to be on the go wherever you’d like to use them. Jabra designed them to be sweat and water resistant specifically for athletic endeavors, but did not want to sacrifice sound and call quality to achieve this. As such, the Jabra Rox Wireless is built of heavy duty materials, is light and supple enough to carry with you anywhere, and has a focus on depth of sound which is not seen in most of today’s bluetooth devices.

As you can see from the packaging photo below, Jabra made the packaging on the Jabra Rox Wireless loud without being obnoxious; it’s intended to stand out in a cell phone store without being overly pushy. If you’ve been in any mobile store lately (or just in any store which happens to sell mobile products), you’ll find it’s easy to experience sensory overload. To me, the packaging caught my eye and attracted me to the salient details of the product. In taking the product out of the packaging, be sure to take note of two things; first, do not throw away the cardboard backer as it has your app code (we’ll get to that later). Second, while the initial set up may seem simple enough, the box inside has a couple of “goody” bags which fit the Jabra Rox Wireless and them very customizable in terms of fit and function. Upon first pulling them out, I was at just how heavy they seem when holding the earbuds in your hand. This is a plus on one hand, as it not only suggests durability but also larger drivers (for enhanced sound quality). On the other hand, I was worried that the weight would easily irritate me during long workouts. 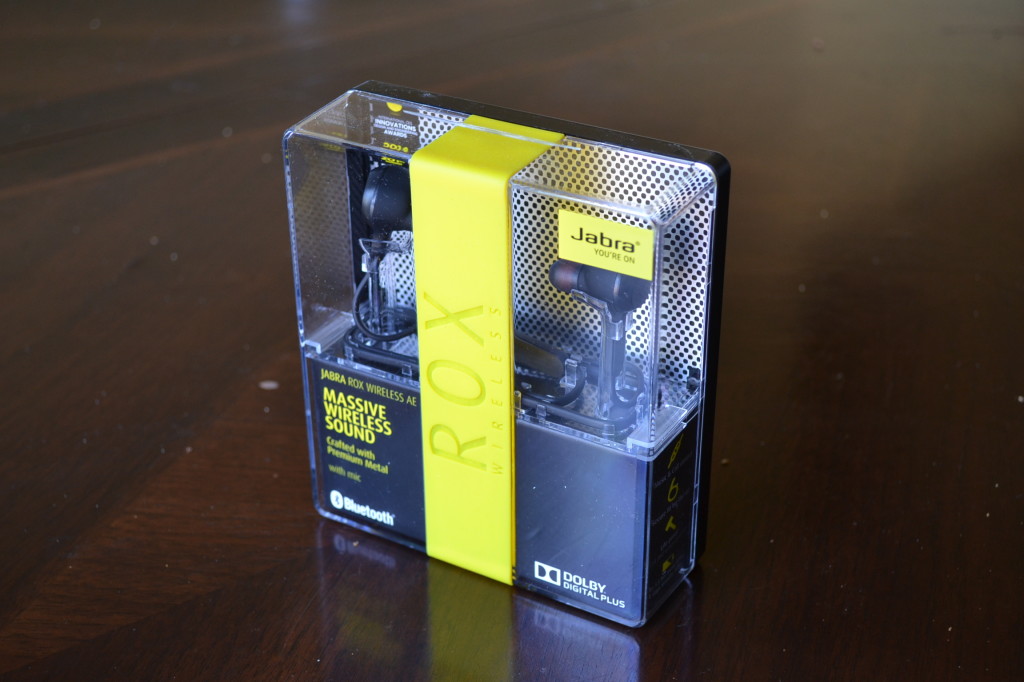 The packaging is attractive without being overly loud.

The goody bags inside the packaging of the Jabra Rox Wireless were filled multiple items which assist with securing a good fit. This proved to be a little frustrating for me during the testing phase of the Jabra Rox Wireless (mentioned later), but suffice it to say there are several fits options available from the combinations provided in the box. There is also a carrying pouch which is the only thing in the box to appear flimsy. This is okay, though, as the Jabra Rox Wireless really doesn’t need much in the way of protection (it’s pretty much bullet proof) so all you really need is a bag to keep them in. The rub on all these devices is battery life – sure, you get to listen sans long cords, but only for so long. Jabra advertises a straight 5.5 hours of continuous listen time on the Jabra Rox Wireless, with much more time available on standby. Charging time is roughly half of the available listen time, around 2.5 hrs.

Over a testing period of approximately one month, I was able to test the Jabra Rox Wireless in several different settings and activities. I had them on runs of up to three hours while completing marathon training, and also on medium length pedals of 45 to 50 miles. I listened to them in several different settings, from weightlifting at the gym to a quiet room, and also answered/received several calls while wearing them. In short, I believe I put the Jabra Rox Wireless through just about every “normal” use situation one could think and even a little bit more; as of this post’s date, I’ve still got them in the rotation when I want to listen to music during any active endeavor. As mentioned above, getting a good fit was actually the most challenging part of the testing for me. Once I accomplished this, they became pretty convenient. 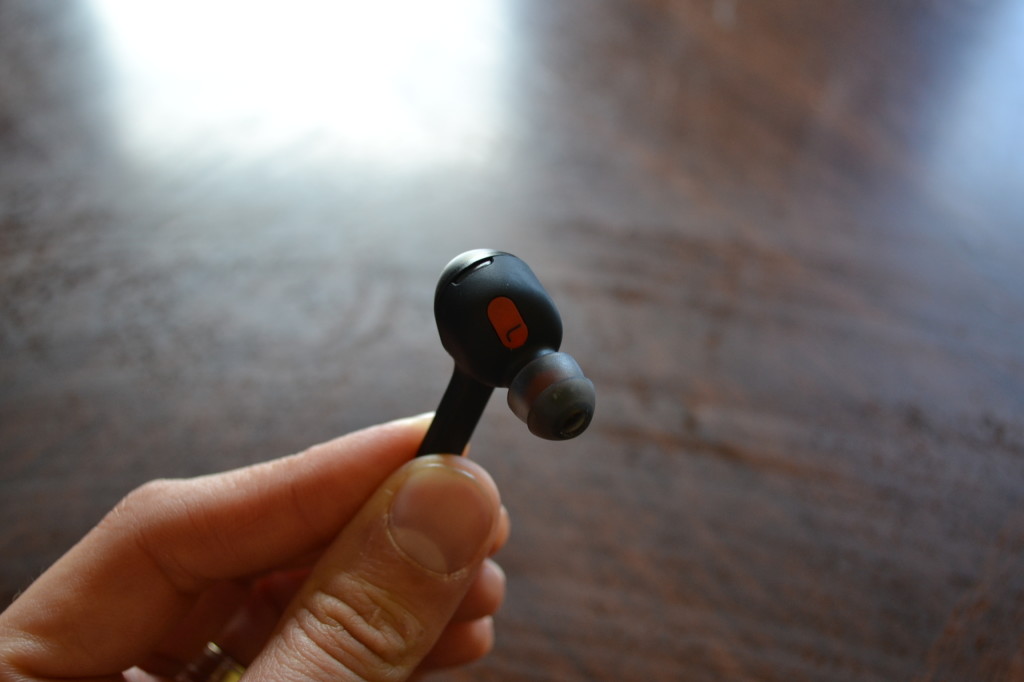 My preferred ear tip selection for the Jabra Rox Wireless was the double gasket – it appeared to seal in sound without causing discomfort.

With multiple fit options in terms of sizing and construction (you can see above that there is a double gasket option among  the assorted eartips), you would think it would be easy to achieve a good fit on the Jabra Rox Wireless. I found it to be the opposite. Of course I thought I had a great fit right out of the box, and many who purchase the product may never experience any fit issues if they don’t use the Jabra Rox Wireless to actually work out. When stationary, just about all of the ear tips worked great without the use of the included “wings.” Once I had them on a run, however, everything changed. I could not get these to stay put during any exercise, including weightlifting, without the wings – regardless of size. There are more expensive options on the market which allow you to custom mold ear tips to fit your ears, so perhaps it was just a matter of the size of my ears. After all, the four tips included probably won’t fit the entirety of humanity, so maybe I’m just a tad unlucky here. 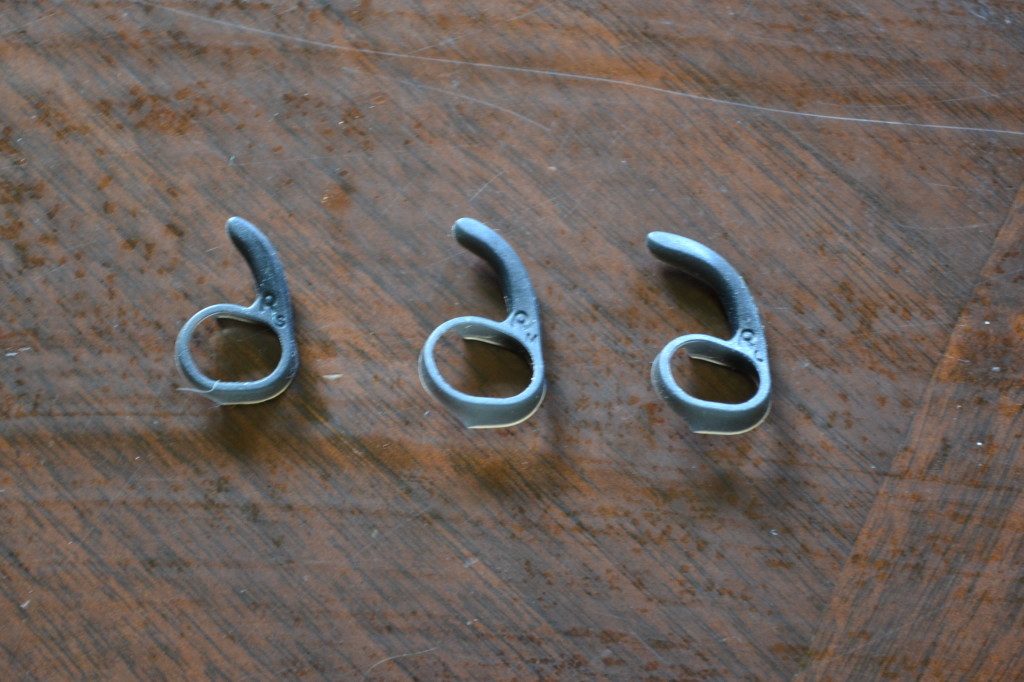 I found these wings (three different size options are included with the Jabra Rox Wireless) to be crucial to securing a good fit.

The problem with the wings is that they almost feel like an afterthought in the overall design. They are intended to slip around the outside of the casing of the Jabra Rox Wireless, and as such can be set up just about any way that you find comfortable. Once they get sweaty, however, they can start to shift around, leading to a less secure fit than desired. Also, the wings tend to catch on things when taking them on and off; any time they catch on something they come off the device, making them easy to lose track off. Once I got my wing size dialed in and was able to wear them routinely, I really like the actual shape of the wing. I just wish that Jabra had designed the Jabra Rox Wireless with some sort of anchor for them so they aren’t always coming off. Once again, these fit issues may not occur with most of the population – if I was exercising in them repeatedly they may never have occured. I never had any fit issues (with or without wings) when listening to music and staying in once place. It’s pretty frustrating for both myself (and my running crew) to have to stop repeatedly during runs to fiddle with them, though, so I’d recommend taking them for a few test runs before trying to listen to music on them during any long active undertaking.

The music, however, is one place where the Jabra Rox Wireless really excels. I prefer the sound in these to any other active headset selection on the market (which is really saying something, since they are wireless – typically bluetooth is synonymous with a degradation of sound). My mobile device is the HTC One (M7, not 8), but I also took the time to test out the Jabra Rox Wireless with the Iphone 5s just for the sake of equanimity between Android and IOS. Really, the sound is great right out of the box with deeper bass than I’d expect from a mobile headset (due, I’m sure, to the heavy drivers) and crisp highs. 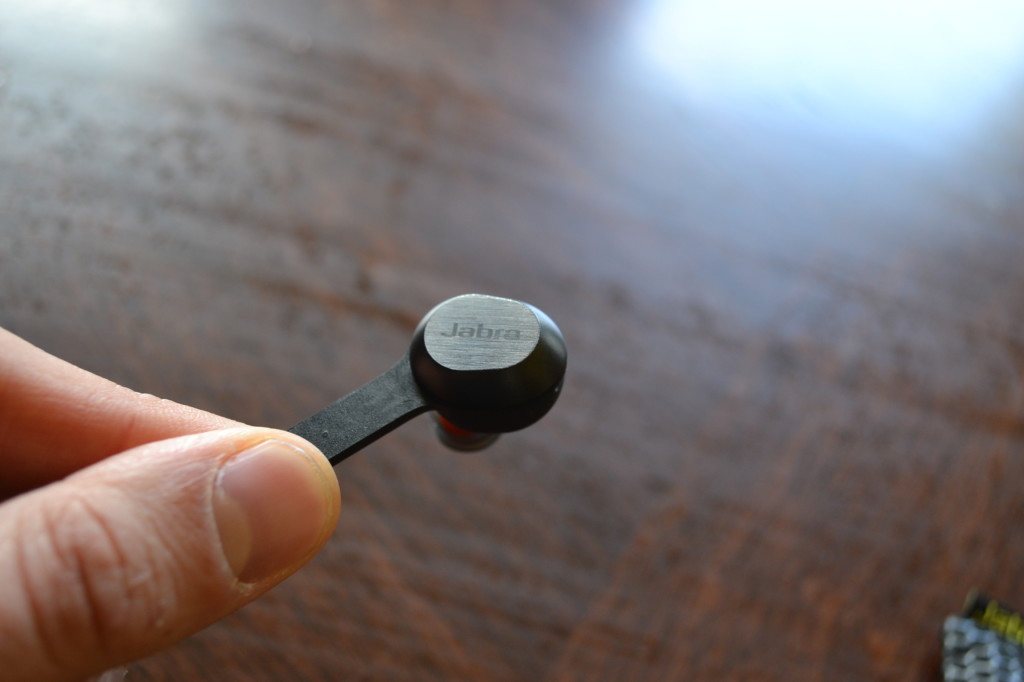 The weight of the Jabra Rox Wireless is due to bass producing drivers inside.

Pairing with a single device was so easy that Jabra didn’t need to include a manual – but they still did. Pairing with multiple devices was nearly as easy, and has the distinction of being one of the quickest processes on the market. This was one of the best features of the Jabra Rox Wireless, and led me to believe that all features were going to be simply amazing. After all, I was really excited about the magnets placed in the back of the headset – when put together, the device will go into power save mode to preserve battery life (which did hit the 5.5 hours maximum life advertised during testing, but definitely needs preserving), and when pulled apart, the device will instantly connect to your device. This worked (and still works) flawlessly, and is perhaps the coolest feature of the device. This coolness factor ends when you realize you can’t turn that function off. The magnets are strong enough to hold the headset together slightly, but not strong enough to stay together when slipped into their carrying case, a pocket, a bag sleeve, etc. This means that whenever they come apart, they turn back on and reconnect to your device. It only has to happen to you once; you’re driving down the road after a tough workout, and you get a business call. Since your gym bag is in the trunk, the headphones (which, unbeknownst to you, are on) pick up the call, and your important business contact is treated to all the road noise your trunk has to offer. Or better yet, you butt dial a friend and he/she is treated to all the wonderful bodily noises of the men’s locker room. Either way, the idea is one of those that should be applauded in conception, but rigorously tested in application.

With great sound, okay battery life, easy pairing, and a multitude of functions, the Jabra Rox Wireless is sure to be a winner for those seeking a bluetooth headset for light to moderate workout activities. Once dialed in, the wings/ear tip combos provide a secure fit, and the magnetic on/off is very convenient to quickly answer phone calls or connect to any wireless device. The sound quality is excellent for a bluetooth device, and would be considered above average for a non-bluetooth device. Overall, the product is a win on multiple fronts, and after repeated use (and figuring out how to keep the headset from auto answering my business calls) it has become a go to device. I hope the second iteration provides a few solutions to some relatively simple problems; if so, Jabra hits the proverbial home run. Head on over to Jabra’s Website to see them for yourself, and possibly buy a pair. At $129.99, they are a pretty good deal in the bluetooth world, especially considering that like all Jabra products, call quality is excellent. Just don’t take calls while riding your bike. Take it from me, it tends to end in tragedy.