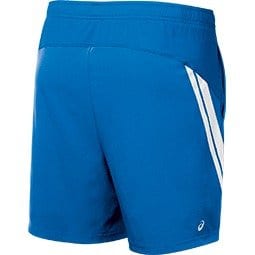 Over this past spring and summer, I’ve been testing out some of the new 2013 Asics Running Shorts and I am hear to report my findings.  Before I get into the details, I feel it’s appropriate to give you some background on Asics Running program.  For many years, Asics has been the company to beat in running shoes and gear.  As years passed, Asics kept on sticking to their secret sauce while some of their competitors like Brooks were concocting their own new and improved secret sauce.  Fast forward a few years, a few shoe models, and a few running apparel pieces and Asics was no longer leading the pack.  Getting to see all the future season’s products about 9 months in advance, I could see this coming and have made small references to it from time to time.  I love the business side of running, but it’s not really my place to tell a company they are getting beat at their own game.

I give you this insight because I have seen Asics Running get beaten up on over the past couple years in the running market, but competitors beware.  You have woken up a sleeping tiger, no puns intended.  Either some people at top have their hides too close to the fire or are flat out mad and are determined to make a better product and increase sales.  After testing out the 2013 Asics Running Shorts, I am thinking they got pissed and started pumping out some new bad a$$ product.

Now on to the details… The two Asics shorts I have tested include the Asics 2-n-1 short 6″ and the Versatility Short 5″.  The similarities between these shorts is that they both have a boxer brief style liner verses the traditional moisture wicking running short brief.  This definitely comes down to personal preference whether you like this style or not.  I personally like both, but I know plenty that will only wear the boxer brief style of running short.  If you’re new to running, I suggest trying out each style and if you’re used to the brief style, I suggest trying out the boxer brief under layer style at least once.  The most noticeable difference is that the boxer brief style of running shorts reduce the amount of chafing compared to the traditional brief style.  The downside is that you get more fabric and if you’re not used to it, it feels a little weird to begin with. 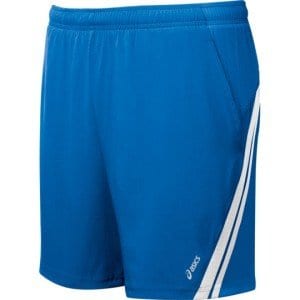 The Asics 2-n-1 short 6″ is a good all around running short that’s not too short like a racing short and it’s not like a super long basketball short.  Having run in 3-5 ” shorts my whole life, the 6″ inch length was not much different for me.  One thing that I noticed with these shorts and other boxer brief style running shorts is that they tend to ride up on your thighs more than a traditional brief running short. 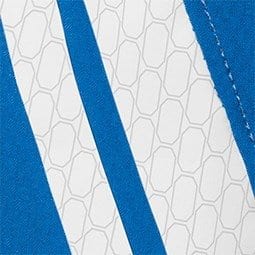 The Asis 2-n-1 short 6″ has a few features worth noting.  For starters, the actual brief is extremely comfortable against the skin.  Asics uses a super soft moisture wicking fabric that does a nice job at preventing chafing and it also keeps your man parts in place.  The outer layer of the short is made of a stretch microfiber that flows well through your stride and doesn’t get saturated by sweat easily on those  hot humid summer days.  These Asics Running Shorts have a pocket on each hip side that can easily hold your gels, phones, keys, etc.  This comes in handy if you’re using them for general use or activities other than running.  To test the pockets, I placed my house key in the shorts on a number of mid to long distance runs and there was not problem of it falling out.  If you’re out running at night or early in the morning, there is reflective striping on the shorts.  Since I tend to run mid day most of the time, the shorts weren’t always lit up while I was running.  I did however shine a flashlight on them in the dark and they were plenty shiny.

Overall, the Asics 2-n-1 short 6″ is a good quality running short that last you at least a few good years of running. 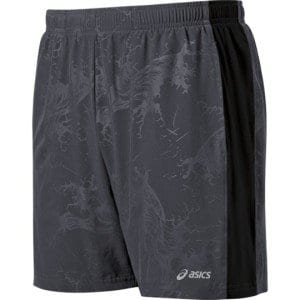 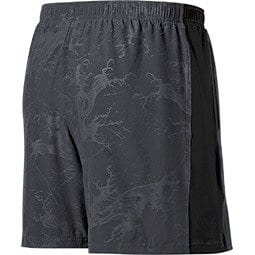 The Asics Versatility short 5″ is one of my favorite running shorts of the season.  Similar to the 2-n-1 short, the Asics Versatility Short 5″ is made with a 4 way stretch micro fiber material that is soft to the touch, but performs extremely well while running.  The Versatility shorts have a boxer brief liner, but instead of having it attached to the outer short, the liner is detachable and can be used with or without the outer shorts.  This I feel is a really nice feature because the boxer brief liner is super soft and comfortable, so I tend to use them as regular boxer briefs for casual use.  And while the boxer brief liner is soft and comfortable, it also performs well while running and other activities. 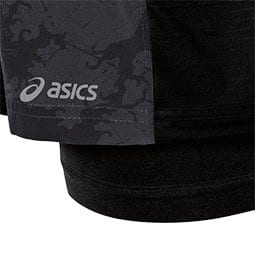 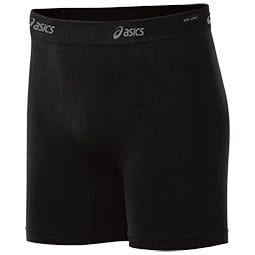 The Asics Versatility Short 5″ has two outer side pockets that are plenty big to carry gels, gu’s, energy bars, keys, wallets, etc.  As mentioned, the boxer brief liner can be detached, but if you want to connect them to the outer short, there is a snap on each side of the hips to connect them.  The inner boxer brief liner is listed as a compression short, but I find the actual compression to be a little more stretchy than compression shorts that are sold seperately. For the runner that chafes while running, it’s nice to know that the boxer brief liner does a nice job at preventing your thighs from chafing.

For more information on the shorts reviewed here or other Asics products, please visit Asics.com