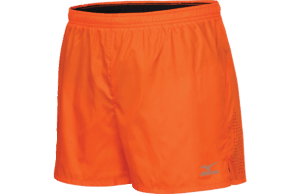 The Aero Square short – a performance piece for the rest of us.

Lots of running companies out there make shorts in two categories – lightweight racing shorts, and baggy jogging shorts. Typically, the lightweight racing ones are split shorts with a small inseam and lots of tech. They’re cool, but if chafing’s a problem for you at all, they’re out of the question for any run longer than a 5k. Shorts of this variety are also usually pricey, and come with a built in brief liner. The flip side of the coin – baggy jogging shorts – often have little to no tech, no liner, and are pretty cheap. They also show it, too – they either don’t function all that well on the run, or wear out after only a few short months. My closet used to be littered with these “casualties” of the running sport; they build up all too fast. 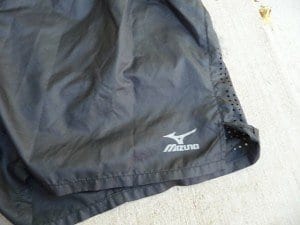 As neither of these options were all that great for someone like me – average height, average build, love to race (but I’m not Ethiopian, and I don’t win marathons), and have some minor chafing issues to deal with, I was constantly on the look out for a great alternative to these shorts. I wanted something with a shorter inseam (less than 5 inches) but not a split short – I didn’t want to kill my inner thighs, and I didn’t want to give up running long. Trust me, there wasn’t much out there – until the Aero Square short came along.

Mizuno, a company long known for making serious performance apparel, decided to put out a short for the rest of us who don’t weight 120lbs and run like rabbits. What’s cool about the short is that while it’s clearly longer than a split short (they are made with a 4” inseam), it’s short enough to feel like a race day short, and lightweight with enough tech in them to make you feel just as cool as those marathon winners. I’ll get to the nitty gritty details about them in a second, but I wanted to talk about how they actually held up to numerous runs. 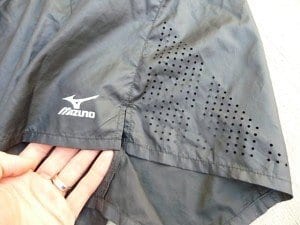 Shorts are one of those tricky pieces of apparel that only bother you when they do just that – bother you. The problem is that unlike other running apparel, a bothersome pair of shorts can turn a run ugly in a big way, and in a big hurry. Chafing issues can scar your legs for weeks, and uncomfortable pinching and fit around your nether regions can… well, let’s not get into that. The aero square short was instantly successful in the fact that I hardly noticed them at all during all of my test runs – I had to coach myself to think about the shorts themselves on each run. The feel of the short is instantly pleasing to the touch; I was very surprised to find that it’s actually rip-stop polyester, as it feels almost like silk on your legs. The nice thing about the consistency of the short is that it doesn’t tend to bunch up like other shorts do when running long and steady, thereby eliminating all chafing concerns. The exterior of the short also is perforated with several holes along the outer seam in order to aid in venting in the short – either way, I stayed very cool and dry during all of my outdoor runs, no matter what the length. 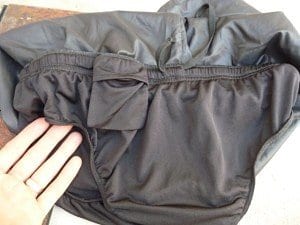 Another place where many companies go wrong with shorts is the interior brief. I exclusively buy running shorts with briefs built in because for me it’s the most comfortable way to run. Sure, during winter months tights and other accessories are necessary, but in general this is the case. Mizuno paid special attention to the brief on the interior of the short. It wasn’t just added as an afterthought – they actually crafted it from moisture wicking material in order to aid with staying dry during longer running efforts. As stated above, I thought the system worked rather well.

With a slew of other features that aren’t necessary but are really nice to have (small inner pocket, drawcord with elastic waist, and reflective accents, to name a few), the Aero Square is a must have short for the rest of us – solid, dependable runners who need just a bit more than a split short, but still value performance over yards of fabric.

For more info on the Aero Square Short and other Mizuno products, visit www.mizunousa.com.