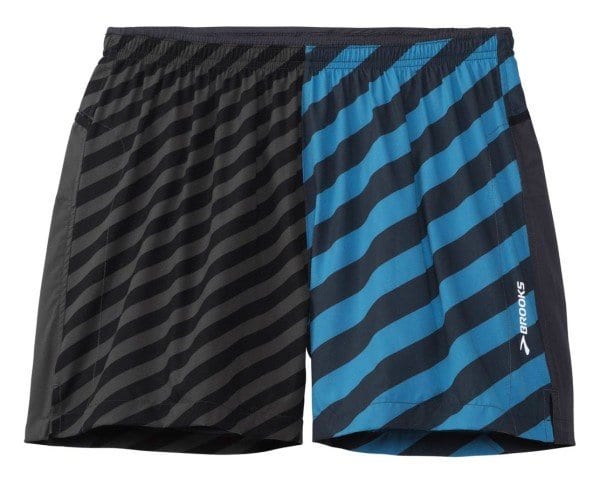 Over the past year or so, I’ve become partial to slightly longer split shorts for running, and I’ve been partial to one brand for the most part. So, I was not expecting to like the Brooks Sherpa IV Running Short (5″ length) when I received them. Their length and modest, 2″ split on the side made me think they would bind or grab on the front of my legs as I ran, as some other longer shorts have done. However, I quickly came around after taking them out for a few runs, and now reach for these over many of my old standby shorts!

The Style of the Brooks Sherpa IV Running Short

The Brooks Sherpa IV running short comes in a full range of 13 different colors, and Brooks sent me probably the loudest one! These are definitely attention-getters, which doesn’t bother me at all – I like the asymmetric stripe design and the color combination matches the shoes Im currently testing, so I was into it. The 13 color options will give all style tastes a few options, however. The 5″ length is a great compromise for those who want good performance and light weight but don’t care for looking like the elite-wave guys. 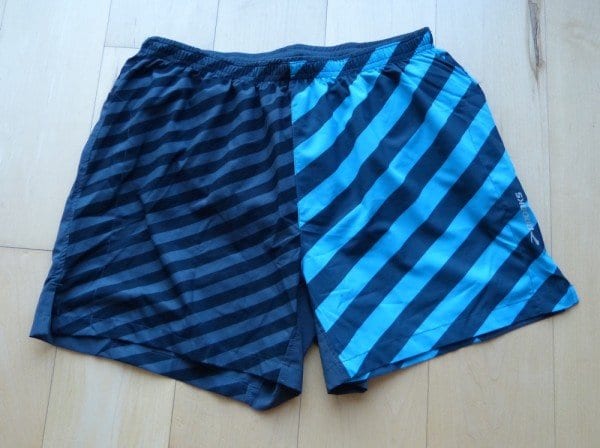 Nope, these aren’t subtle, but I’m a fan

I’m not going to tell you the Brooks Sherpa IV Running Short is a long gym-style running short. You’re definitely showing some leg with these on. For me, the length was perfect though. I usually opt for longer split shorts and even sometimes size up to get a little more length, and the result is about the same length as the 5″ Sherpa. The cut is roomy enough to give plenty of freedom of movement, but not so much as to get in the way during hard running. I found the medium size I received from Brooks to be true to size. The elastic waistband is plenty stretchy, and the main body materials of the short have enough stretch that I don’t think most would need to size up from their normal size. 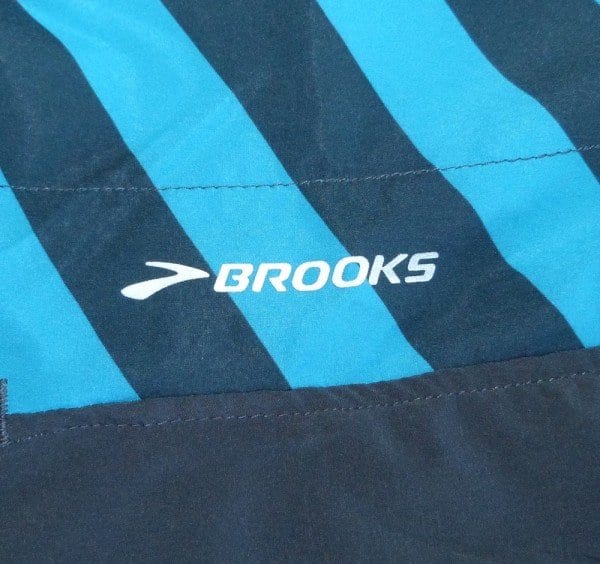 Reflective logos on front and back of short for safety

I was impressed with the light weight and stretch of the main body fabric. The Brooks Sherpa IV running short is definitely one of the lightest running shorts I’ve ever worn. Despite originally thinking I wouldn’t like these while running, I hardly noticed them at all, which I think is the highest praise that running clothing can be given. The lining is 100% poly and has a coin/key pocket uniquely placed on the back of the brief (see photo below). 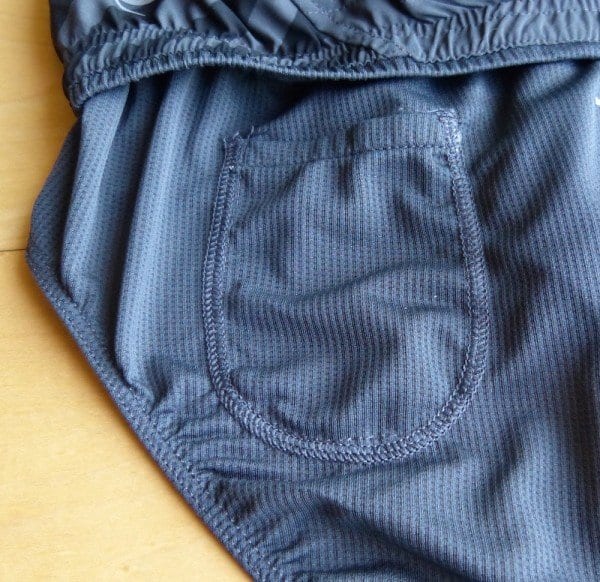 Usually these are placed on the front and sometimes interfere with hip flex, so I thought this was innovative. I was suspicious initially that the seams of the pocket might chafe, but I wasn’t aware of it at all while running. I didn’t however stow anything in it, opting instead to carry ID, key in the more secure rear zipper pocket.

I sweat a lot… I mean a lot! So, one of my primary criteria for running gear is always how much moisture it will hold, and how much it weighs when soaked. The Brooks Sherpa short’s fabric is some of the lightest running short material I’ve encountered and dries very quickly. Again, when on a run, I just didn’t think about the Sherpa shorts, and that’s exactly what I look for in running gear. The rear of the shorts are loaded with storage – both sides have quick-draw pockets with velcro closures which are perfect for gels. Pro tip: don’t forget you have gels in there when you get in the car after a run! 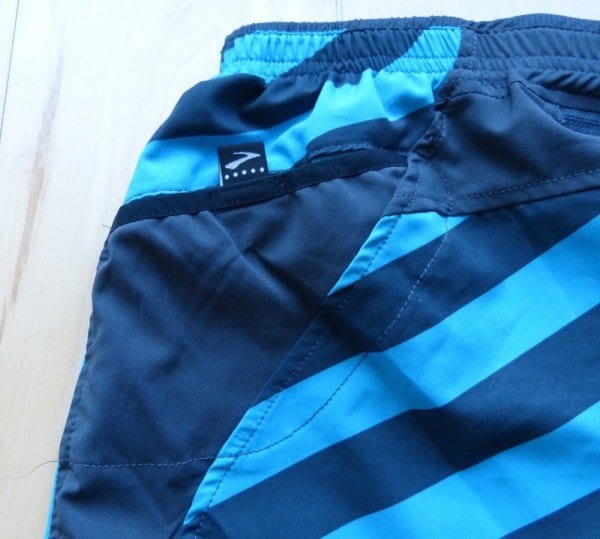 A third pocket in the center of the back of the shorts has an easy to use zipper closure, and a lining that Brooks states on their website is ‘moisture-resistant’ but in another place ‘moisture-proof’. I’ll agree with the resistance, but after a long run perspiration had definitely penetrated into the pocket. For those who perspire a normal amount, this feature could be perfect for protecting a small music player. 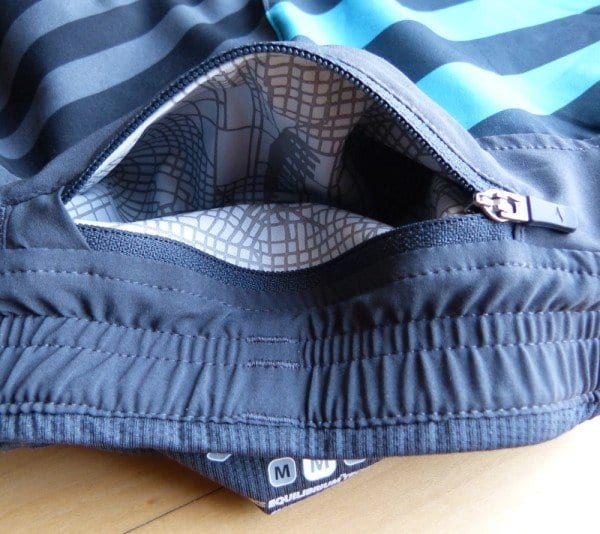 The Brooks Sherpa IV Running Short 5″ is definitely one of the lightest and most comfortable running shorts I’ve ever run in. The length and cut are a great compromise. Short enough for great race performance, but long enough not to turn-off those just not cut out for split shorts. At $45, they are also an awesome value. If you’re in the market for new shorts, definitely look to the Brooks Sherpa IV. BrooksRunning.com even has a few of the colorways on sale as I’m writing. 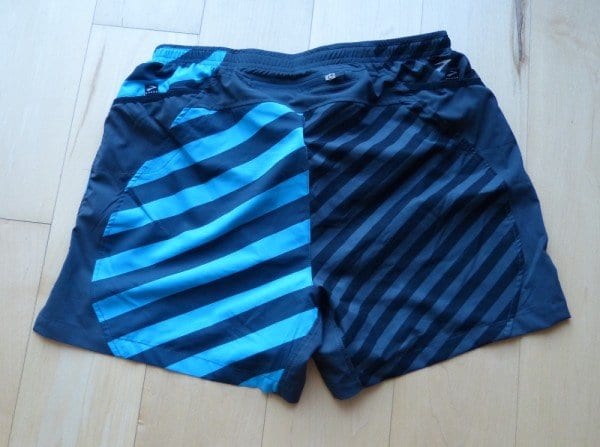