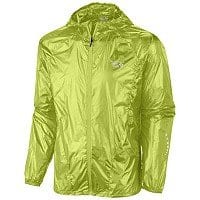 Every now and then, a product comes along that is truly useful – a product that you find yourself reaching for day in and day out, one that becomes part of your trusted “bag-o-tricks.” Certainly, at Mountain Hardwear such products have become the rule, not the exception; the good folks over there tend to make serious gear for serious people. That being said, the Ghost Whisperer Hooded Jacket stood head and shoulders above other products of a similar vein that I’ve tested this spring – and not just from Mountain Hardwear. It’s not often that you see a product which will truly change the game; I believe that the Ghost Whisperer will do just that, and possibly then some.

I believe you are probably wondering what could make a simple looking hooded jacket so special. The key (I’ll get to it a tad bit later) to that little mystery lies in the fabric it’s made from.  From the package, I was largely unimpressed. Yes, it folds down into it’s own little pocket – we’ve seen that before. Yes, sealed seams/zippers protect you from the elements, like so many other products do. I was prepared for yet another familiar round of testing – when I noticed something about the feel of the fabric. The jacket felt (right out of the box) like I was holding air. It’s an odd experience to describe, but essentially it was like holding onto a softer version of a garbage bag. It’s extremely lightweight; your mind doesn’t want to accept the fact that it’s actually there. After checking the specs, I found out why – the entire jacket weighs in at only 2 oz. Incredible. That’s less than half the weight of the lightest running shoes on the market – 2 oz of beer is barely the first swig from the can. 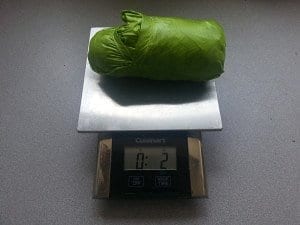 I had to use a kitchen scale to confirm – 2 oz, on the money.

Skepticism was genuinely my next reaction – so I proceeded to put the jacket through it’s paces. Fortunately for me (but unfortunate for most) mother nature has had a warped sense of humor lately, and sprinkled us with extremely varying conditions – over the testing period, I ran and biked in this jacket through high winds, light drizzles, intermittent showers, and even light snow on a trail run with it. Over the testing period of approximately three and half weeks, I was able to use the jacket frequently – as I stated before, I like it so well that it’s now a regular staple of my workout wardrobe. To date, I have more runs in it than pedals, so I’ll speak to that. 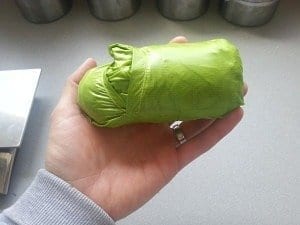 It fits (quite literally) in the palm of your hand.

As I stated before, it folds down to an almost incredible size, no bigger than the palm of your hand. When going for a run in any type of varying condition, it fits into just about any running belt/trail pack you can think of. When heading out the door, I would just slide this into a key pocket or even belt loop, and be prepared to shed any sort of precipitation I might run into. As I was looking to test out the water shedding capabilities of the jacket, I first ran the fabric under the sink. Try it for yourself – even after submersing the jacket fully in water, it refuses to absorb water.  It never broke down at all over the course of my testing. Throughout my runs in light rain/misting conditions, my inner layers never became wet from the outside. On one run, I was out for nearly 45 minutes in cold, misty conditions, and stayed nearly completely dry – the jacket zips up to your chin, and even with the hood up, your face is still exposed, letting water in. No water entered in at the seams during my testing phase. 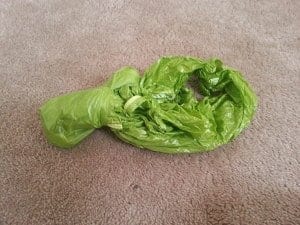 Half way out of the small interior pocket… 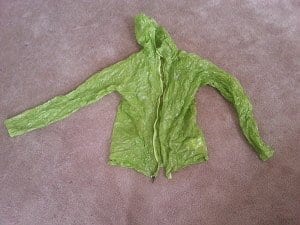 and then fully out to become a full sized jacket. I honestly think most of the 2oz is in the zipper.

On one of my trail runs near Pagosa Springs, CO, I literally ran into the face of a freak snowstorm while trail running in this jacket. To begin with, I started my run at approx. 9,000 feet up in the San Juan national forest above the town – I ran in only a base layer, mid layer, and this jacket. At 23 degrees, the jacket kept me surprisingly warm by blocking most of the wind – I had packed a heavier alternative, but decided to give the Ghost Whisperer a spin, as I figured the sun would warm up the mountains quickly.  Instead, the snowstorm moved in, and the trail run ended up at the same 23 degrees it started in. Throughout the 8 miles, I was comfortable, neither too cold nor too hot. This is a function of movement, however – I would not wear just this in a snowstorm that I intended to be out in for a long period of time, but it was nice to know that should mother nature surprise you, Mountain Hardwear had prepared me adequately.

In doing a little research, I found the reason that Mountain Hardwear has used this fabric as a staple of several pieces in their lineup. As mentioned above, the Ghost Whisperer fabric is the key to all of the attributes of this jacket – the water resistance, the light weight, and the wind blocking capabilities all stem from this. MH spent over three years developing this product – in corporate terms, that’s a century (and a fortune) spent R&D’ing a simple material. I’d attempt to explain it here, but for brevity’s sake, head over to their website to see the video on the Ghost Whisperer Fabric. Even though I tested only this jacket out with this fabric, it comes in a multitude of products – I’d imagine the combination of this fabric with a down liner would be outstanding. At first, I assumed the price tag of $165.00 was a bit steep – however, my testing phase turned me into a believer. As you can see, I tested, and preferred the light green color; it does, however, come in orange and a spacesuit looking white color. It’s easy to browse, see the video, and even purchase the jacket (for cheap shipping) at www.mountainhardwear.com. Cheers.