Capris have recently become a growing segment of my running and athletic gear, but not all capris are created equal. The New Balance Impact capris are lightweight, fully fitted capris that incorporate some great features all in one package. From mesh behind the knees, to a media/stow pocket and reflectivity, the Impact Capri has got it all. 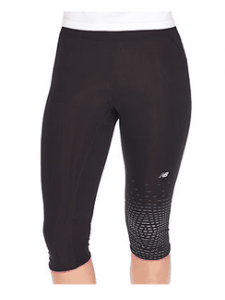 I ordered the Impact Capri in a medium even though, as a size 4, I fell into the small on New Balance’s size chart. I wanted to avoid any potential bulging form them being too tight. It seems that sizing on capris can be hit or miss. Turns out, I should have listened to the size chart. The medium was fine, but a small would have been perfect. User error.

Other than my poor decision making on sizing, the fit of the Impact Capri was great. They were the perfect length falling just below my knees and they were cut for an athletic build. The rise on the waist was a bit higher than many capris I’ve tried, landing right at my belly button, but the waistband was soft and adjustable making it totally comfortable. I did roll them down on occasion still though. 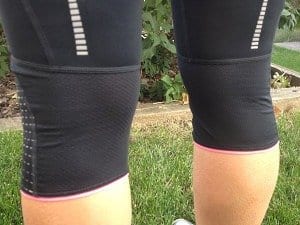 The Impact Capri is made of a stretch material that is 87% polyester and 13% spandex. The mix was perfect to keep them form-fitting, but also high-quality, wicking and quick drying. The Lightning Dry® fabric kept me from feeling swampy even when the temperatures rose quickly on morning runs. The seams were well-placed flat seams which were flattering and protected from any unwanted rubbing during longer outings. The mesh insets behind the knees, not only added ventilation, but also kept them from feeling bulky when I flexed my knees making them even more comfortable.

The back stow or media pocket was perfect for carrying chapstick, energy gels, or snacks for a long run. I’m not one to run with music, but for those who are, I imagine it would be great for an iPod/iPhone too. 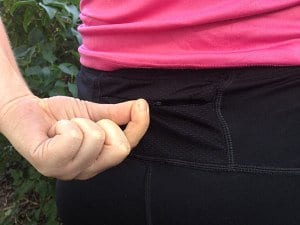 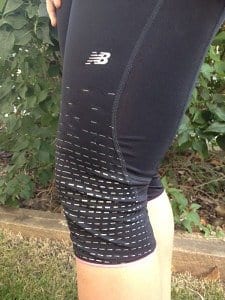 At the end of the day, I really like how many features were included in the Impact Capri. The material, cut, and styling were all great. I have found myself wearing them for running and also a lot of fast-paced fitness classes and appreciate the fact that they stay put, so I can focus on my workout rather than adjusting my clothing.