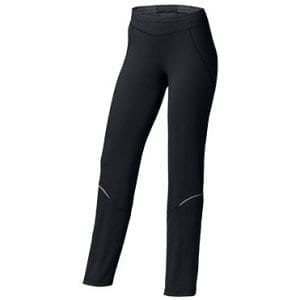 Most of the tights I run in are actually men’s running tights that I have borrowed or stolen from my soon to be husband. Therefore, I was thrilled to test out Brooks Utopia Thermal Pants because they are brand new (still with the super soft feel) and are specifically designed for a woman’s body.

The Utopia Thermal Pant are composed of 88% polyester and 12% spandex. Brooks has used this combination to produce a heavier weaved soft-thermal fabric that can be used in colder temperatures. The inside of the pants are super soft with a similar feel to fleece. I have been running in the Utopia’s in temps down to the teens and have been pretty comfy on runs of up to 2 hrs. They have mild wind breaking ability and I have yet to over heat in them. As a frame of reference, I usually run in knickers or capris until the temps dip below 30 degrees.

What I really like about the Utopia’s are the 9″ leg zips that feature reflectivity on both sides of the zipper. The leg zips allow for easy on and easy off, as well as giving you the option to unzip a little if you get a tad hot. Being 5’9″, tights/pants are often too short for me; the Utopia’s have a 30″ inseam and hit just above the ankle bone. If the temps are super low I wear long socks to keep this area covered. There is a rear zippered compartment for a small ipod, such as the new Nano, or your house key. This compartment also has a reflective logo on it for added visibility.

Brooks states that the Utopia Thermal Pants are semi-fitted and I would tend to disagree. Rather, the pants are more tight like, which I actually prefer when running. The Utopias run true to size and are fitted through the hips and waist and then they are a bit looser through the knees, yet gather again at the calves and ankles. When I run in the winter I like running in tights that are close fitting throughout. The Utopia’s look like tights that are a tad to big for me and I would rather have a closer fit that allows me to layer more easily when the temps really plummet. I have been known to wear two sets of tights or place tights underneath windproof pants in order to get out for my workout in below zero conditions.

Overall, the Utopia’s by Brooks will be a key piece in my winter running because of their great visibility and super soft feel that provides great warmth, yet weights nearly nothing. Perhaps the fit or the description of the fit needs to be amended in future years.