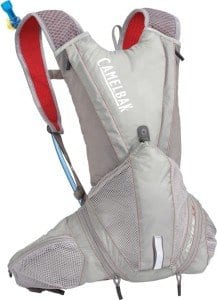 Camelbak. We all know the name, we’ve seen people wearing it, and we know how it works. Essentially, you carry water like a camel – in a pack on your back. Granted, a camel can’t strap anything on and off (mainly due to a lack of opposable thumbs and a phobia of mesh webbing), but you get the picture. The main point being that once you’ve seen one camelbak, you’ve seen them all – or so we thought. The guys at CB have come up with yet another method of hydration transportation, and while it’s still the familiar CB stand by, it’s got some nice tweaks to make it feel like a brand new innovative product. Kudos to the R&D section at CB – you did your homework, and it shows.

Disclaimer – I don’t like hydration packs while trail running. I’ve always liked to set up camp or park at one location, and then range out from there, carrying all that I need in the form of a handheld water bottle. The drawback to that system is the fact that, while staying light (and feeling less constrained) you have minimized the territory you can cover in one run. I would typically run in on a bottle and cliff bar, purify some water (there are a ton of small easy to use devices that purify 25 oz. of water) if needed, and run back out. This gave me a comfortable maximum of approx. 4 hours or so of trail running. The camelback extends that system by quite a bit. Anymore than 12 hours, though, and I’m looking to camp. Just saying. 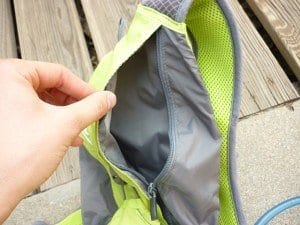 I don’t know why I like PBJ’s so much while trail running, but this thing definitely fits two with room to spare.

Let me work through the nitty gritty details, and then move on to the actual time spent in the product. When I say that it extends the run, I mean that you now have the option to complete some serious all day adventuring. The pack comes with some great storage in addition to the hydration bladder compartment. The upper compartment is approx. the size of a small Frisbee, and comfortably fits food and other misc items (sun screen, etc.). Then you have the smaller compartments on each side strap, shown below. Think of these in terms of medium sized digital cameras; I fit an older Panasonic Lumix in the right side, and a couple of cliff bars in the left side.  In the upper compartment, I carried a couple of sandwiches, some sunscreen, a tube of Chapstick, and a Leatherman multitool. On top of all of this, there is not only a cell phone pocket on the strap (everyone carries smart phones now, so I doubt this’ll get much use) but also two mesh compartments on the outside of the pack, which I only used to stuff my hat and shirt in when I got hot, and to see if the pack was comfortable on bare skin (more on that later). 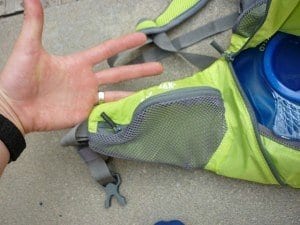 The issue became, of course, the fact that I was laden with a bunch of excess gear that I normally never carry to trail run – my fault entirely, but we at AGR take everything to the extreme just to see how it’ll do. The pack was admirably comfortable, even when the bladder was full to its listed 70 oz. capacity. It took some finagling to get all 70 oz. in there, but we finally managed to do it. The filler cap shown in the photo is huge, and we found it hard to fill to the brim unless two people did it. But to fill it to around 50 oz. was a breeze. Plus, the large opening makes it really easy to clean out and dry for storage. But did it actually hold up on the run? Well, the pack did it’s job, and carried all that extra gear. Did I like having all the stuff jingling around? Not at first, but I quickly got used to the idea of having it all back there, especially when I got hungry, and stopped for a break half-way through one of the testing runs. 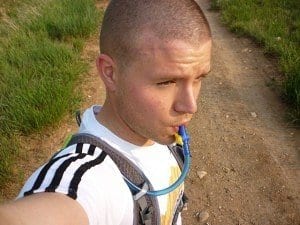 The valve is really simple and easy to use – even while moving. Of course, it’s a bit hard to take a picture of yourself while running…

So, how did it fare on actual runs, day in and day out? I vastly preferred running with the pack when I was only carrying water, a bit of food, and a camera or phone in the side pocket. While all the other storage was convenient for longer trail runs, it just felt like a bit too much when on shorter runs. I do like how it carries water; in fact, I like it enough to swap it with my other water bottles for longer trail runs. The tube is just long enough to comfortably drink from on the go (after a bit of work, I was able to comfortably get the tube out of it’s carrying clip without stopping), and the patented bite me valve is the same as all camelbak products. 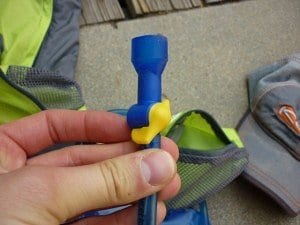 Standard valve for all camelbaks – works great all the time, but you may wanna get your own – I wouldn’t drink out of this if I had to share.

The LR in the name stands for lumbar reservoir, and it refers to the fact that the reservoir spreads out along the small of your back; this allows for the water to sit in the most stable area of your body during the run, and keeps it from jiggling around during times when the excursion gets a bit more exciting. The key is in the triangular shape of the bladder – the water wraps around the small of your back and out to the sides when worn. This was actually really comfortable during runs, and I think it’s key to the balance of the entire pack – this really kept it anchored in place, and I didn’t notice much pack shift until this was empty, but the rest of the pack was still full. 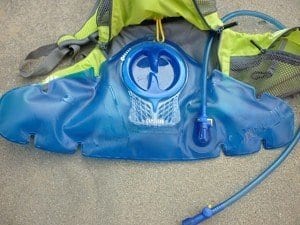 The bladder shape really is a nice touch, and is the key to the fit of this pack.

Speaking of pack shifts, I’m sure I’d be amiss if I didn’t comment on the strap set up. It’s fairly simple, including two shoulder straps as is standard on any backpack; what’s nice is the addition of two cross straps to anchor it in place while moving. One, it’s got a lower strap across the abdomen, which clips in the middle and has two adjustments (one in either direction); two, it has a chest strap which clips in the middle, and has one adjustment, pulling towards runner’s right. The clips for each of these are heavy plastic, and if past experience with CB products is any testament, these will be far less likely to break than you will be to buy a new pack just ‘cause you want one. 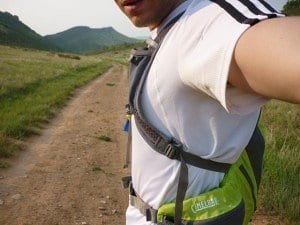 Yep, staying in place, thanks to the mesh straps.

Overall, the pack was a winner. The mesh on the underside of the straps was comfortable, and while I did sweat a bit (any pack will make you sweat), I felt it worked much better than traditional straps, especially on the back. I even ran a few miles shirtless just to see how it felt (I’ll spare you the picture); it was actually fairly comfortable, but be forewarned – strap placement when shirtless can lead to definite nipple damage if one isn’t careful. Due to the nature of trail running, you need this pack to stay in place, which doesn’t allow for a whole lot of room for breathability. The mesh runs all the way down the backside of this pack in addition to the straps, keeping the pack as cool and dry as you could expect – you’ll still sweat a ton, but this is mainly due to the level of exertion, not the pack. The bottom line? At the price point, you can’t find a better pack; it stays in place, carries a day’s worth of equipment, and keeps you hydrated. Check it out at www.camelbak.com. 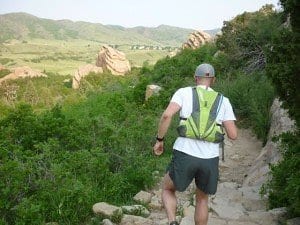 A plus – even if you aren’t the best trail runner, at least the pack looks cool!
Share