Termed the “GPS for Runners”, the Suunto Ambit2 R is designed specifically for usage by runners; the addition of Suunto “apps” makes it usable for many other types of athletes and activities. If you haven’t run with a GPS watch – it’s time to get yourself a present. Since most reading this review probably are familiar with them to be using such an advanced unit (more on that later), I’ll skip the usual intro concerning GPS watches in general. Overall, I really did find the Suunto Ambit2 R to be a very advanced unit (especially for the price point), capable of providing more real time feedback than anyone should ever have to know – but that some of us still do. Suunto’s been around for awhile, making high quality watches for active endeavors for years. You’ll see that we’ve actually reviewed the Suunto Ambit2 recently; the major difference between these two models is the heart rate monitor, gearing towards runners, and price point. A good heart rate monitor is a crucial addition for not only things as simple as calorie count, but also for specific endeavors involving heart rate training zones. As I used the watch primarily for triathlon training, I found this to be very useful for not only running, but for biking as well. 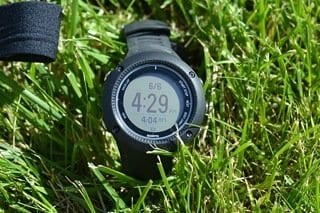 The Suunto Ambit2 R watch – the GPS for runners.

Suunto’s apps are the defining characteristic of the Suunto watch lineup – so I’ll begin with Suunto’s MovesCount website.As my experience has primarily been with competitors to the Suunto lineup, I’ve never actually been able to test out a watch with apps before. This was a new experience, and one that I had mixed emotions about. I really, really liked to geek out and fine tune the watch to have specific apps that suit whatever endeavor I happen to be embarking on. I was able to custom create apps for trail running, cycling, road running, and even for interval workouts on the track; granted, I didn’t need the GPS function for the track workout, but I was able to use it in terms of heart rate feedback. I believe some users, however, will be frustrated with the lack of customization on the watch itself.  Upon purchasing a Suunto Ambit2 R, you’ll need to create an account to login. It takes only a few minutes, but is very detailed, so you’ll want to take some time to do this. 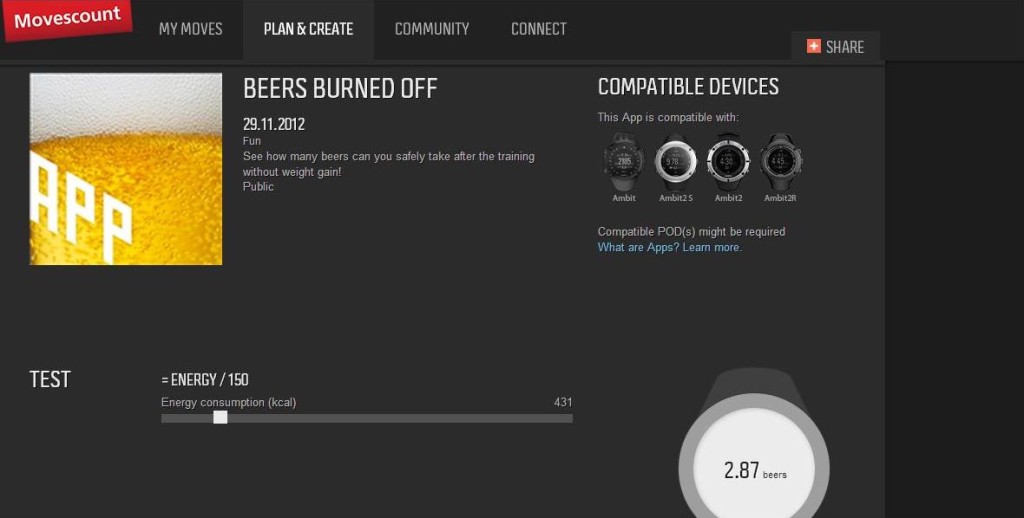 Thanks for the Beer App on the Suunto Ambit2 R, JWEAK!

The first run I went on with the Suunto Ambit2 R I had assumed I’d be able to just jump online and set it up 5 minutes prior to my run. My running partner grew a bit frustrated with waiting for me, so I just used the “running” function right out of the box. 20 minutes into a 10 mile run, I realized that the auto lap function was actually clocking kilometers, and not miles. You can not change this function from the watch itself; you have to actually log in to the website to change this function on your watch. In a watch of this caliber, this may or may not detract from the usage of the watch; I like the high customization, but dislike having to log into the website each and every time I wish to do so. This, however, is the only detracting feature of a highly customizable system. Overall, I’m a huge fan of the system itself; take a quick browse of MovesCount to find out all of the innovative apps people have created. I love this; I never would’ve thought to design an app which tells you how many beers your workout has burned off, but suffice it to say this quickly became a fan favorite. 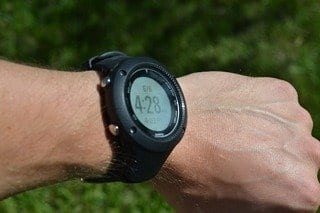 The Suunto Ambit2 R fits a broad range of wrists as I have a small wrist. My wife, however, found it to be a bit large.

As you can see, the fit and finish on the Suunto Ambit2 R is excellent, and definitely on par with what you’d expect from Suunto. Immediately after unpackaging the box, I played around with all the buttons, casing, and strap. I did have to adjust the strap to nearly the smallest setting in order to wear it running (see below) because I hate to have a watch bouncing around on runs. While the battery life is excellent (I wore this as an everyday watch during the testing phase – the battery lasts nearly as long as advertised by Suunto – up to a couple of weeks in watch only mode, which is refreshing), it’s largely due to the design of the watch itself, which puts a large GPS transponder/battery unit on the side of the watch. Upon first inspection, I assumed this may become a bit uncomfortable to wear. I was completely wrong about this, as it was very comfortable even though it feels a bit heavy on the wrist. I do think this is a slight drawback to the design, as I generally prefer velcro for a secure fit on GPS watches. It’s just a personal preference, but I’d prefer a watch band configuration that doesn’t force me to use the band the watch came with. 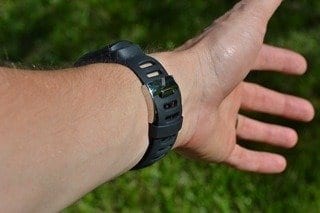 The watch band on the Suunto Ambit2 R is unable to be switched with other watchbands. As such, you’ll need to find a comfortable setting on the band itself.

The large chrome buttons on the Suunto Ambit2 R are easy to use and find, even on those pre-dawn early morning runs. They did become a bit slippery with sweat during use, but I had no trouble depressing them to toggle the watch even on the bumpiest of trail runs. As I used the unit for cycling quite a few times as well, I preferred to set the watch before my ride rather than attempting to toggle buttons mid-ride, which could have proved hazardous to my health. Some buttons of this size can depress incidentally during workouts, making for an irritating final mile when you realize you’ve lost the last 4 miles of data. The buttons on the Suunto were solid enough that this never happened to me, which is yet another sign that the people at Suunto actually use their own product.

The Heart Rate portion of the Suunto Ambit2 R 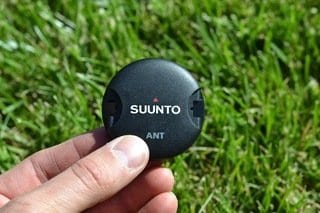 ANT is a key feature of the Suunto Ambit2 R GPS watch.

The heart rate monitor included uses ANT technology, which has become standard for high end GPS watches with this type of configuration. This allows the heart rate monitor to talk with the watch, and record your heartbeat. It stores all of your key data from runs, and is a passive receiver, meaning that it doesn’t ever have to be charged. The first time hooking this up, you’ll need to pay close attention to the sensors on the strap itself (see below). 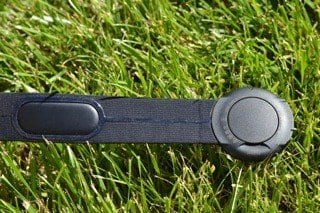 The sensor on the Suunto Ambit2 R heart rate strap is shown, over to the far right. There are two of these, to be positioned over your rib cage immediately below your pecs.

The sensors which transmit data are actually located on the strap, and not on the ANT unit pictured above. This is different from other designs from competitors, as typically the sensor will be right on the unit. I personally feel this design on the Suunto Ambit2 R is superior, as it allows for very quick collection of data from the user, and is very accurate. I’ve had several watches which take two or three tries to hook up to the heart rate monitor, which is fairly annoying – this unit linked up right away.  Also unique is the way you take off the strap – instead of a catch or hook system, the strap links right into the side of the unit. This is to allow for ease of taking the unit on and off, and also to sync both sides together. 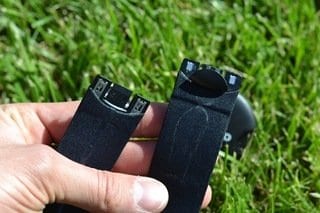 The heart rate strap on the Suunto Ambit2 R hooks to either side if needed.

The GPS Function of the Suunto Ambit2 R

The GPS function of the Suunto Ambit2 R is perhaps the most usable of any GPS watch I’ve ever tested. In prior testings, we noticed that it could take up to 30 minutes to sink up with satellites. While this didn’t happen on every instance, it happened often enough to be irritating. As the base unit of the Suunto Ambit2 R is the same as the Suunto Ambit 2, it was remarkable to notice that I experienced literally no lag between start time and link up. Each time I stepped out the door, I was able to link extremely fast to GPS locating satellites. Suunto did contact us directly to advise that a software update was completed in between the testing phases of these two units; it is response like this (and a quality product) which sets Suunto apart from the competition. I also found the GPS to be extremely accurate during my testing endeavors as well – I compared the unit with existing maps and a smart phone in order to measure the accuracy. I both cases I found the difference to be negligible on distances of up to 16 miles while running, and 30 miles while cycling. While using the GPS for cycling, I wore the unit on my wrist; on my aerobars, it was easy to observe the broad face of the watch while riding. There are several aftermarket mounting options for the Suunto Ambit2 R if you like the watch over your current cycling computer; I certainly liked to be able to customize the unit to show what I wanted during my pedals as opposed to my existing computer. 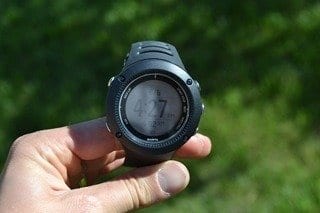 The Suunto Ambit2 R – your go to source of all exercise metrics.

The Suunto Ambit2 R is a watch designed around those of us who wish to know each and every metric of exercise. It’s customizable apps make it applicable to every type of outdoor endeavor, and the battery life makes it easy to wear day in and day out without having to charge it continuously. The sleek styling is not only visually pleasing, but comfortable for most to wear, and the face is large enough to read during heavy use without being too large to wear on small sized men’s wrists. Some will not like the lack of customization on the unit itself or the ability to change straps for comfort, but for most seeking to use the Sunnto Ambit2 R, this will not be an issue. Priced at $299, the Suunto Ambit2 R is on the more affordable end of the equation for most Suunto products, and the quality of the build clearly shows it will last a lifetime. Suunto also appears to excel at customer service based on our interactions, so you are not just buying a quality, customizable product; you are getting excellent response from a company who truly knows their product in and out. Browse on over to Suunto’s Website to “conquer new territory” and check the Suunto Ambit2 R out for yourself. If you’re thinking about making the purchase, be sure to check out the selection of apps, which are able to be uploaded by all Suunto users. Perhaps after log in, you can even design one yourself – but I don’t know how you’ll ever top the beer app. Cheers.