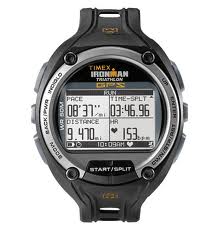 The Global Trainer from Timex is one of those watches that has so many features it seems like you would need a p.h.D to operate it. Equipped with G.P.S., heart rate, reading power on the bike, and the ability to be worn while swimming, it is a triathlete’s dream. I had more than one person ask if I could send emails or texts with it. OK, it’s big but not any larger than other G.P.S. watches. The Global Trainer also does way points and mapping for navigation.  The Global Trainer starts at $250.00 without the heart rate strap and moves to $300 with the strap. It’s not cheap, but it is less expensive than some of it’s competitors.

With so many features, navigation can be difficult, but the G.T. quickly becomes intuitive. The back/power button switches the watch from time to the other functions, the mode button scrolls between modes, the up and down buttom are used to navigate your selection while enter makes the selection for you. A top recessed button serves as the start and split button. After using the watch for a week straight I got the hang of what I was doing and it became second nature. There are several modes for the G.T., Performance, which captures data, Navigation, which plots waypoints, etc., Multi Sport, which automatically switches activities for doing mulitple workouts, Review, where you can see previous workouts, Configure, where you set the customizable screens, and P.C. Sync, used for downloading data.

I used the Performance Mode the most, as I think most users will, to record distance, pace, time, heart rate etc. while running and riding. Within the Performance mode there are five customizable screens. As a default they are named, swim, bike, run, custom 1 and 2 and time. In each screen you can set how many windows are viewed, up to four, so those with less than perfect eyesight can make it easier to see what is displayed. I kept the names and customized the bike, run and custom 1 and 2 to what I wanted to view. I set it up so that when I chose the run and bike screen I saw metrics like pace and heart rate while I used custom 1 and 2 for metrics like calories, elevation gain and average pace. There are 25 different metrics you can see with the Global Trainer. Scrolling between the screens is done with the up and down button. Whatever you want to see while on the move, the G.T. will let you view. The Global Trainer is water-proof down to 50 meters, but like other G.P.S. watches the signal is lost about two inches under water. Unfortunately so is the heart rate, so the watch becomes a simple stop watch when used for swimming.

Another great feature is that it is ANT+ compatible, meaning it will pair up with any third party ANT+ device. Using the Configure mode you can get the watch to sync up with whatever product you use. For a triathlete or cyclist that uses a power meter, like I do, this means the watch will read your power output from your Power Tap, SRM or Quarq. I used my Power Tap, along with their own Joule C.P.U. to test how accurate the readings were and at all times the G.T. was within 1 to 2 watts of the Joule, so I don’t question it’s accuracy. That said it does not have all the functionality of the Joule or other dedicated power unit. The G.T. comes with a rubber watch mount for attaching the watch to your handlebars.

To use Timex’s old slogan, the G.T. can take a licking and keep on ticking. I used the G.T. to track a lot of my training, especially mountain biking and riding my cross bike. I also use it to get valuable information while racing cyclocross. It’s survived the cold, mud, and even an accidental run through with the spray washer. It also held up to severe heat, humidity and salt water when I took it to Hawaii. Another positive is that the G.T. picks up satellites quickly, there’s no waiting for it to link up. The signal also stays connected, I had no issues while riding and running through the heavily tree lined trails. I would on occasion get some odd heart rate readings at the start, but I’ve had that issue with every heart rate monitor I’ve used.

Downloading the information captured and charging the watch is done with a simple U.S.B. cord. Rather than provide their own software, Timex gives users a free TrainingPeaks account, which is the best thing they could do. TrainingPeaks is the best training software out there so Timex was wise not to spend the time and money to develop their own software when most users wouldn’t use it. The download process is very simple. Using TrainingPeak’s program, Device Agent, all you need to do is open the Device Agent, put the watch in PC Sync mode and click a few buttons. It’s as simple as any other device I’ve used.

Downloading the watch is when you really get a sense of how much it does. Viewing heart rate, speed, distance, cadence, elevation, etc. on the graphs along with your actual route is impressive. By tracking all these items you can really detail your training to accomplish your goals. The watch can essentially act as a motivational tool, pushing you to do your usual loop just a bit faster than last time.

My only gripe comes with the battery life. In general it’s pretty good, but if after a session you forget to put the watch back into Time mode, the battery wears down. I made this mistake a few times to find my battery nearly gone at the start of a ride.

The Global Trainer is the latest attempt from Timex to put all the features an endurance athlete could want in one watch. It is fully loaded with everything an endurance athlete could ask for in a relatively decent sized package. For the cost, $300 with the heart rate strap, it will replace all other watches and cycling computers you may have. Given it’s versatility and functionality that’s a fair price.