What’s coming down the pipeline? Julbo, that’s what.

Sunglasses are difficult to test – more suited to individual tastes than just about anything we review, it’s hard to take an objective look at them. Just about anyone can look good in a running jacket or in a pair of  boots (okay, not anyone – you know what I mean) but sunglasses have to have that rare combination of style, performance, and durability that keeps you coming back for more. I’ll gladly swap out shoes 4 times a month (and we sometimes do here at AGR) but I for some reason I like to keep sunglasses around.

Trust me when I say Julbo has that combo dialed in, with the added bonus of tech that actually works. 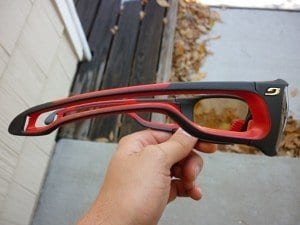 Wide open frames prevent sweat from pooling under the arms, making for a more secure fit.

Julbo is relatively new on the scene, and their mission is clear – sport eye wear that performs in all conditions. Conditions that an actual athlete goes through day in and out, not just the “oh, I’m running to Starbucks from two blocks away in cute spandex to look like I’m so active” condition that you see fairly often in Denver. While the looks of the entire line up are a bit “flashy” for my taste, I like the clean and effective styling of the pipeline. Really, style isn’t the most important feature of the glasses for me, but since Julbo obviously spends a lot of time in this department, I figured I’d give it the nod. This fit is fairly wide, and fits large size faces easily. I have a fairly large framed face, and so finding sunglasses that don’t pinch is difficult for me. Julbo aids in this endeavor by putting easy to read measurements on their site, so I knew what I was getting into before I tested them.

Most of the tech in the Pipeline (and all of the Julbo lineup) lies in the lens. Julbo uses a photochromic lens for numerous glasses in it’s lineup. Photochromic lenses shift transperency based on how light or dark it is outside; the brighter it is, the darker the lens gets. And they do so remarkably quick – per the Julbo website, it takes just 28 seconds to shift from light to 50% of full dark. This is an excellent transition time, as it is quick enough that your eyes are not dazzled by extremely bright light, but slow enough to allow your eyes time to adjust as well. Where I found this most useful was on early morning trail runs. As I ran in and out of shaded areas, the lenses would constantly adjust to the light – it was great to come around a corner and not be instantly blinded by rays coming over the hog back. 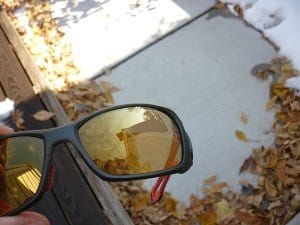 Photochromic lens in the shade…

As if perfecting the photochromic lens weren’t enough, Julbo added two more features to their performance lens line up that really stand out, and held up well in testing. First, the NXT lens technology that Julbo uses is more impact resistant than just about any other lens on the market. You can read up on the tech specs on the site (they literally list the speed a metal projectile can hit the lens without it breaking – 45.7 m/s), but suffice it to say, they are strong enough to be used as safety glasses during activities like, I don’t know, weilding a jackhammer. While I didn’t shoot the lens with a BB gun (I wanted to keep them around), I can vouch for the fact that they are extremely impact resistant. Go ahead and take a tumble – it’s hard to even scratch these. Second (and perhaps my favorite feature) the coating is very resistant to rubbing and wiping. In other glasses I’ve tested, the polarized treatment wipes off after heavy use. Nothing stinks more than having a polarized lens… that doesn’t work right in your field of view where you need it most. I’m always getting sweat, oil, and dirt on my glasses – this feature was great in that after more than a month of heavy testing (and wiping), I’ve yet to see any effect. 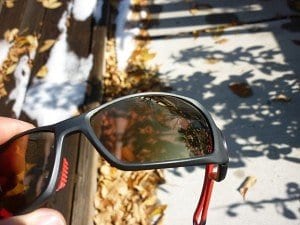 And after only a few seconds, photochromic lens in direct sunlight.

The pipeline is a very wide, full framed pair of sunglasses – if they don’t fit you or you don’t quite like the styling, don’t despair. Julbo has a full lineup of glasses guaranteed to fit even the smallest of faces. For a pair of sunglasses with this much tech, the pricing is competitive as well.

For more info on the Pipeline Sunglasses and other Julbo eyewear, visit www.backcountry.com.