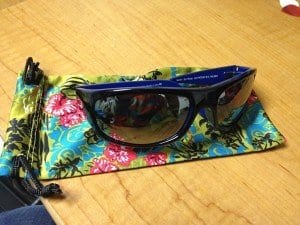 Clean lines and classic styling contribute to the timeless look of the Surf Rider.

Maui Jim. If you are familiar at all with the world of sunglasses, it’s a name you’ve heard over and over again. The company has always prided itself on having some of the finest optics available in the sunglass realm; in my opinion, they’re also very well known for the quality, craftsmanship, and style that they bring to the forefront of each pair of sunglasses they manufacture. Due to the high price tag, I’d always passed up Maui Jim, thinking that I’d much prefer to save a few bucks. As such, The Seawall presented me with my first opportunity to test their reputation out first hand. 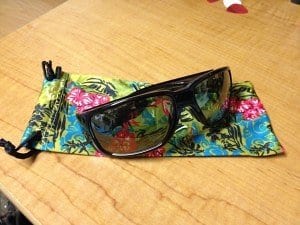 The Hawaiin themed bag is a nice touch, and doubles as a cleaning cloth.

We tested the black frame (with wood grain accents) featuring the Maui HT lens. Just to answer a question up front, HT stands for high transmission – this means the lens is bested suited for low light or overcast days. Right out of the box, the seawall had a few things that distinguished it from the competition – the weight, the opacity of the lens, and interesting design on the frame. I’ll just tackle these in the order I noticed them. First up, they have a heft to them which threw me off a little bit. Most of the sunglasses I test are specifically designed with an athletic event in mind; as such, low weight is usually the hallmark of the design. The seawall, per Maui’s website, is “an ideal choice for spending time on the water, driving to work, and everything in between.” It’s obvious that they were more fashion inspired than not, but I just didn’t think they’d feel so solid. It lends itself to the build of the glasses in such a way that it feels sturdy rather than useless, though. The precision with which it’s crafted makes it feel bullet proof, which I really liked about them. 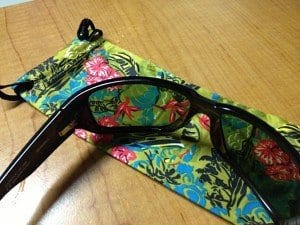 Check out the view through that lens – that’s letting a lot of light through.

The opacity of the lens was the second thing I noticed on the seawall right out of the box – under fluorescent/indoor lighting, they don’t appear to have much of a tint at all. This is because of the High Transmission (meaning high light transmission) feature of the lens. It’s meant to be used on those low light or cloudy days for optimal clarity. When trying them on inside for the first time and looking in a mirror, it was immediately obvious that I can see my own eyes through them when looking up close. This may not be a big deal for most, but for me it was a slight drawback. When I put on a pair of sunglasses, I like them to either be mirrored or completely opaque – the tint of these glasses is much closer to what you would find on a ski goggle lens intended for all conditions, as opposed to the darkness you’d expect to find on your average pair of sunglasses. And in taking them off for the first time, I noticed the wood grain accents. Rather than being embossed or overlaid on the plastic frame, it was inlaid down below the top polycarbonate layer, but only on the inside of both arms. It’s a nice touch, making them interesting without being flashy, casual with some style points. 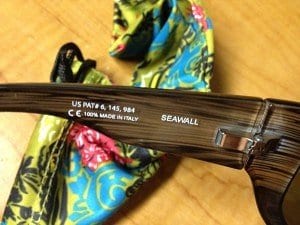 I really like the woodgrain accents on the seawall.

All told, it’s an interesting mix of thoughts for a pair of sunglasses, especially a brand so highly touted as Maui Jim. I was pretty eager for a trial run, as I rarely find shades that fit my huge head. These are definitely for large framed faces and have quite a bit of coverage, as I was to find out as I set foot out the door. The morning of the first day I wore them, I was immediately impressed with the clarity of the optics, especially through the full window of vision. Some sunglasses have a fairly limited sight field, and I personally can’t stand not being able to use my peripheral vision due to horrible lens distortion. This is absolutely not the case here. The Seawalls provide gorgeous sight lines, no matter what angle you look through the lens. And another nice thing about the Seawall is the sheer size of the lens in the frame. The lens stretches comfortably from eyebrow ridge all the way down to midcheek, effectively creating one of the broadest viewing windows I’ve ever seen in a pair of shades.

As morning progressed, however, I was a bit put off by just how much light the High Transmission lens lets in. As I hinted at before, each lens is nearly translucent, and your eyes are easily viewed through the lens by outside observers. In the full out light wash that is the vaunted “Colorado Sunshine,” the HT lens was just simply not opaque enough for comfortable viewing. Road glare from driving long distances during the day was especially uncomfortable on the eyes. The next day of wearing them, however, was overcast and cloudy all day; this is where the lens truly excelled, providing distinction, definition, and color to an otherwise dull day. I wore them all day without even feeling as if they were on. On the next day, the sun was out again in full force, and I discovered a drawback to the solid build of the sunglasses – even the slightest hint of sweat sent them running down my face. Upon closer examination, it appears that the nose pads are very small in comparison to the overall weight/size of the Seawall. This creates a problem for someone such as myself, with admittedly oily skin under sweaty conditions. I liked them as a fashion piece, and appreciated the optics, but out on the water I’d feel as if I was much too likely to have them fall off. 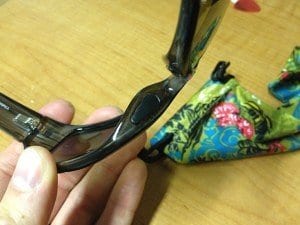 Observe the nose piece size for yourself – evening chewing gum made them slip off on me.

Another drawback of the design was that they continually fell off of my head while stepping indoors. Everyone has a preferred way in which to wear sunglasses while coming inside – I’ve always preferred to put them on top of my head. This was next to impossible for me with the Seawall, and as I’ve stated before, I have a large head. No matter what I tried, I couldn’t get them to stay put. I ended up having to stick them on my shirt collar (which I hate – it’s the easiest way to scratch them) when taking them off.

Overall, if you’re looking for a pair of sunglasses for casual wear, and like to pay for what you get, the Seawall from Maui Jim is what you need. Especially if you have a huge head, like me. They have the feel of a pair of sunglasses that won’t quit on you. The hinges are great, the build is extremely solid and durable, and the optics are truly without parallel. Just make sure they fit your head in every way that you wear sunglasses before purchasing. As for the HT lens, it would be the best lens money could buy in areas that see several overcast days. I’ve never worn a better pair of sunglasses for flat light and low light conditions. People in Seattle, I’m thinking of you. In Colorado, though, not so much. Head on over to www.mauijim.com in order to see them in all the different lens/color combinations they have to offer.