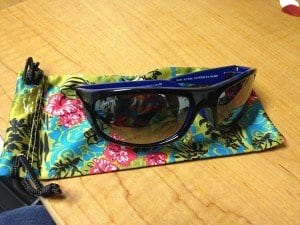 Maui Jim – as I stated in my review of the Seawall, the name is synonymous with superior optics, quality construction, and style. Recently I was given the opportunity to test a couple pairs of these glasses, both the aforementioned Seawall and the review here, the Surf Rider. When testing multiple products from the same manufacturer, it’s hard not to lapse into a compare and contrast mode, but I’ll do my best to evaluate the Surf Rider on it’s own merits – and not just because of the two pairs, it was the one I preferred.

I knew to expect the solid build that appears to be the trademark of just about every pair of Maui Jims, so instead my first observation of this product was geared towards the smaller details which Maui Jim does so well. Right out of the box, I noticed the hinge construction. Without hinges which can match the solid construction of the frame, the glasses would be utterly useless. The hinges on the Surf Rider are extremely well made and well thought out. I know that attention to this small detail appears trivial, but what makes them so well thought out is that the springs also function in reverse – they not only collapse in when folding the glasses up for storage in the case (the case is a nice bonus which we’ll get to in a bit, as every pair of MJ’s come with a similar case), but they are also flexible in reverse, meaning they comfortably accommodate a wide range of facial shapes and sizes. As I’ve mentioned in several of my reviews, I have a rather large head and find it difficult to get hats, goggles, and sunglasses to fit right. From the first time I slipped the surf rider on my head, it was apparent that the hinge construction made for an extremely comfortable fit. 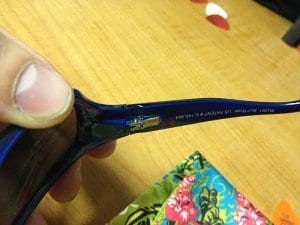 The dual action hinge, from the inside. Note the the springs are completely contained for longevity.

The second thing I noticed right of the box (while slipping them on for the first time under fluorescent/indoor lighting) is the darkness of the lens tint. We tested the black with blue frame color paired with the Neutral Grey lens. I guess my only beef with Maui Jim is that the options for lens/frame color combos are fairly limited. Other sunglass manufacturers in this price range will make a frame color with multiple lens options in order to allow you to purchase the exact lens/frame color combination you wish to have. For instance, I loved the blue/black of the Surf Rider frame, but actually found this lens to be too dark. Don’t confuse the optical clarity with the darkness of the lens itself. As I’ll discuss in a little bit, both pairs upheld Maui’s reputation for having superior optics. But the darkness of this lens was distracting in the fact that (initial impression) it would next to impossible to wear in low light situations. Indeed, a quick glance at Maui’s website revealed that these were designed for “bright, direct sunlight.” So Seattle folk – I’m sorry. Buy the HT lens instead of this one. Colorado folk – read on, you’ve all just found a lens which is more than a match for that Colorado sunshine. 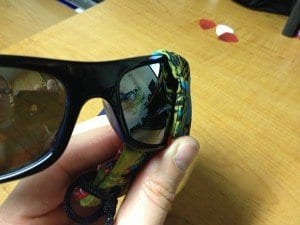 That lens is more than a match for the sunniest of days.

My first day of testing, unfortunately, was partially cloudy with a chance for snow. I didn’t really like the neutral grey lens for this situation, as my initial observation was correct. It was more than a little annoying just how dark this lens was under the conditions. I kept taking the glasses off, only to be blinded by the grayness of the day. I would quickly put them back on, only to find it too dark even for driving and other menial tasks. I did discover that I loved how the glasses would remain stationary on top of my head, as the frame fit seemed just about perfect my facial structure/head shape. I was disappointed about the performance in low light, but eager to give them a second chance in high light situations.

The next day was fantastic. From the time I left my house at 7:30, the day was one of those days that anyone in Colorado can tell you about. The sun was so bright that it was painful to be outside without sunglasses. Permit me to hint at my misspent youth – it was hangover bright out there. There aren’t many places in the country where this is the case, but it’s so bright on these days that you can’t see a white car, house, or object without squinting. And of course, the optics in the Maui Jim were fantastic. I had the good fortune that day to have a long drive up in the mountains to test the Surf Rider out on, and the definition from snow/water was nothing short of amazing. At higher elevations, my eyes had no problems staring at sundrenched fields of snow for long periods of time; and lower elevations, the glare from numerous mountain streams was minimal at best. It’s easy to see why Maui Jim is the choice of several people in the marine industry, as the neutral gray lens in combination with the Polarized Plus 2 feature made it possible to see straight through the water as if no glare existed at all. I can’t wait to take these fly fishing.

In terms of fit, the more I wore them, the more I liked them. Forgive my lapse into compare/contrast mode, but the size of the nose pieces on the Seawall was a major drawback for me, as they didn’t keep the sunglasses on my face. Even a simple act like chewing gum sent those glasses sliding down my nose. Not so with Surf Rider. Even under fairly sweaty conditions, the glasses stayed put on my face. Keep in mind, however, that the Surf Rider leans more towards fashion that towards sport; after a couple of short runs wearing them, I’ve decided that Maui’s claim of being able to handle everything from “catching waves” to “driving to work” is a bit off. When I take these fishing, I’ll definitely use a retention device, as any vigorous activity seems to send them sliding off, even with enlarged nose pieces. 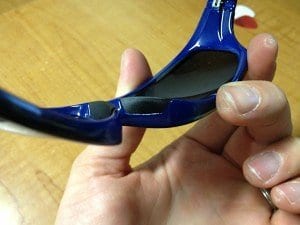 View of the nose piece from underneath – more than adequate for daily use. I wish they’d added grips on the arms – they’d have been perfect for more rigorous activities.

In conclusion, I believe now that Maui Jim definitely lives up to it’s high expectations. Everything about the surf rider speaks of quality construction attention to detail, and longevity. The price tag is higher than I would like, but in Maui Jim’s case, you pay for what you get. And as for the case, they don’t skimp there, either. The case is solidly built as well, definitely tough enough to protect your investment in a suitcase or briefcase. The only drawbacks I found from either pair of glasses came when I tested the glasses in conditions they weren’t designed for. Both performed beautifully in the situations that they were designed for, and in my book, a promise kept by a company of Maui’s status is a great thing. Head on over to www.mauijim.com/surf-rider for all the lens/color combinations available. And when you’re there, tell them to send us something with the HCL Bronze lens. We’ve tested the darkest of the dark, and the lightest of the light. If prior experience holds true, the HCL Bronze should be fantastic.