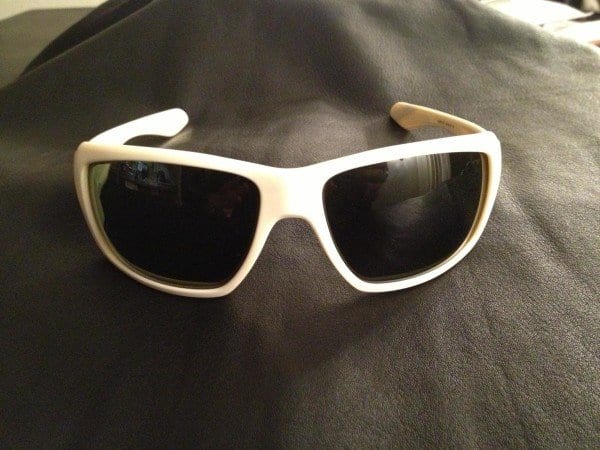 That’s a pretty large viewing profile, but not without big styling.

Honestly, I felt dirty even agreeing to write a review about a pair of sunglasses named “The Big Taco.” After reading the Oakley website, I felt a bit better – the Big Taco was envisioned with the rock and roll era in mind, where names like “The Big Kahuna” were pretty commonplace.

Still – Oakley, I know what you were thinking, and your mother wouldn’t approve.

The Big Taco delivers durability and a large viewing profile with a design that truly does harken back to the early days of rock roll. Right out of the box (Oakley doesn’t include a case for these, only a carrying cloth), the large size of the lens is what immediately grabs your attention. This lens size isn’t designed to be subtle and unobtrusive; it’s designed with the same in-your-face spirit that Oakley markets day in and day out. I also immediately noticed how light the sunglasses are; with such a large design, large frame, and large lens, I expected them to be very heavy. It’s a credit to Oakley that they don’t miss out on small details such as this (they dub the material “lightweight O matter”) when crafting a new pair of sunglasses, and my initial assumption was that the lighter weight would make for a very comfortable fit. Also, the color palette is attention-grabbing without being over the top. The bone white in combination with lime green accents is another credit to the Oakley design team. Over the years, we’ve tested several Oakley products – while they may be obtrusive in coloring and styling, they always find a way to make it look really, really good.

My first day wearing them was a great experience in terms of sunglasses. I feel that sunglass are most useful when you don’t notice them; if you are constantly having to fiddle and clean them, you just don’t have the right pair of sunglasses for your head. Girls, you may have a different opinion of this. I’ve seen my wife wear sunglasses that had no discernible use to mankind – she thought they were “pretty.” One of the things I like about Oakley as a brand it that for the most part, they tend to be just as functional as they are cool. After a few hours of wearing them, I mostly forget they were there. My only actual beef about the design is the lack of any rubber pads, either on the nose or arms. A simple pair of rubber pads would have greatly increased the overall wearability of these sunglasses, as when I looked directly down they tended to slide, especially under sweaty conditions. That’s to be expected, however, as Oakley didn’t really intend them for heavily active use. It’s also important to note that Oakley makes a wide variety of styles – the all-plastic models such as these don’t tend to have rubber pads. I just prefer the ones that do. 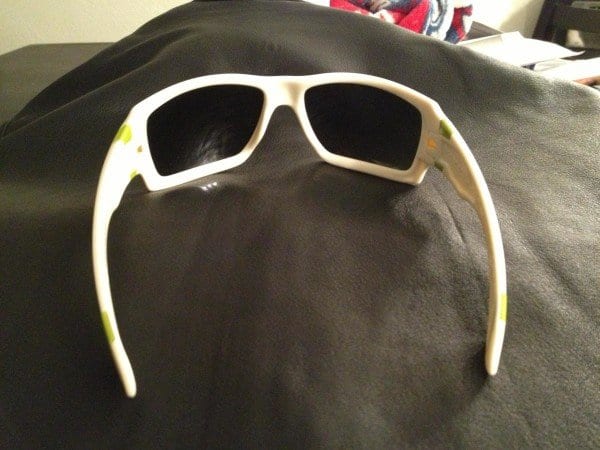 No nose pads? Not really a problem for the BT.

I also really enjoy the shade of Oakley’s “dark grey tint.” Oakley prides itself on the quality of its optics (indeed, they market their glasses as containing “high definition optics” – don’t think that’s not a play into the American consumer psyche), and they certainly deliver within their price point. Keep in mind, I’ve never compared upper echelon Oakley sunglasses to other upper echelon companies, but my general opinion of Oakley is this: you pay for what you get. So for the price point, this lens delivers in terms of optical clarity. When compared to more expensive lenses (especially those made of glass) they tend to feel a bit muddy. Admittedly, this is a bit of an unfair comparison, like bringing a gun to a knife fight. I do feel it is worth mentioning, though, as one can instantly notice the lens difference when trying on multiple pairs of sunglasses in a store. As for the tint – I like dark grey for really bright to slightly overcast days. They are great for blocking light transmission, and my past experiences with Oakley have taught me they don’t degrade with age. I especially like the dark grey tint for driving – I don’t particularly favor polarization for driving around, as the striations in viewing the world through a polarized lens and tinted car windows are distracting. Not so with a simple tinted lens, but again, this is a matter of personal preference.

If anything could actually be improved on these glasses, I believe it would be the hinge construction. This isn’t a beef, mind you, and is fairly nit-picky. The mold of the glasses has the hinges buried deep within the plastic. Around the hinge, the plastic is shaped into two interlocking arms within the frame of the sunglasses themselves. The reasons for this are both practical and simple. One, the inner arms lie flush against the temples and does not grab or scratch the wearer. Two, a self-contained unit is less subject to contamination by sweat, dirt, and grease. The problem with the construction, however, is that it does not allow for wearability across a large range of faces. If your face is too large for these, tough – they do not flex beyond the lock point. Also, after multiple openings and closings, the plastic will simply wear away, as plastic is not meant to withstand high amounts of friction. I’ve had several pairs of Oakleys over the years, and the arms will simply become more and more loose over time, eventually completely losing the ability to remain closed on their own. By this time, however, most people are ready for a new pair. Once again, you get what you pay for. 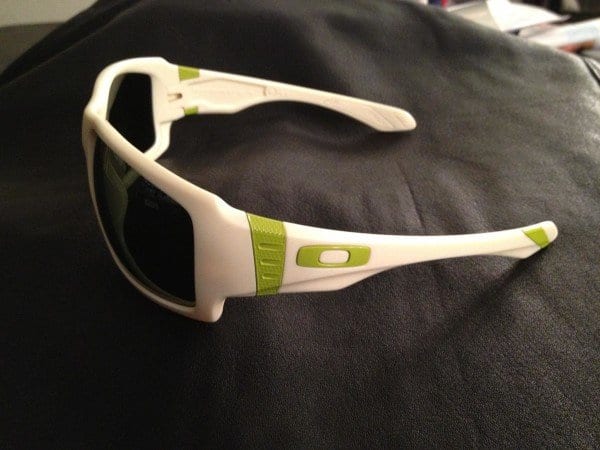 The bottom line is that if you’re a fan of the “rock and roll” styling, a large viewing profile and need sunglasses for casual use, the Big Taco is a great choice. Just don’t say the name in front of your mother, unless she’s absolutely oblivious to pop culture references. Or on the flip side if she’s into rock and roll, buy your dad a pair for Christmas. Maybe they get down like that. Head on over to www.oakley.com, and check them out. I especially like the portion of their website that shows the variation in lenses. Just an FYI – the view through the dark gray lens on their site is almost exactly what it looks like in real life. Good job Oakley.