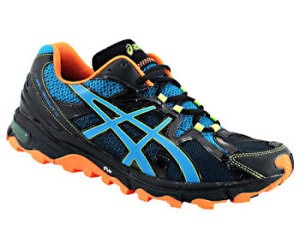 Asics in the past years has dabbled here and there in the trail running scene, but it seems like they never really committed to the trail running community.  Today, Asics is starting to turn a page and its competitors and trail runners better take note.  They aren’t just dabbling anymore, but they are taking a hard charge ahead.  One of the new shoes in the Asics trail running line is the Asics Gel Scout and it not only looks cool, but it performs like a rock star.

I’ve tested out the Asics Gel Scout on a number of different types of terrain including steep rocky ascents, rocky rutty single track, smooth single and double track, gravel paths, and roads.  On all the different surfaces and distances run, the Asics Gel Scout didn’t blink an eye, or a lug.  While this may sound like I am kissing Asics butt, I feel that it is my duty to let you know when what I truly feel about a shoe or product and I am truly impressed by this shoe and Asics commitment. 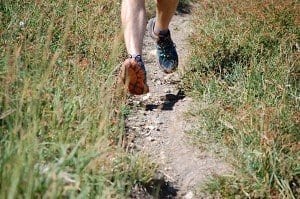 The Asics Gel Scout fits into the category of the traditional trail running shoe, meaning it weighs a good amount more than the minimalist and/or barefoot trail running shoes in the market.  The shoes weighs in at 12.1 oz. for men’s and 9.8 for women’s which is on the higher end of shoe weight these days.  While they are heavier than most, when they are on your feet they don’t feel heavy and clunky. There are times when a shoe weighs a lot and you can tell the second you put it on your foot and there are times when you put the shoe on and you forget about the weight.  The Gel Scout fits into the latter of the two. 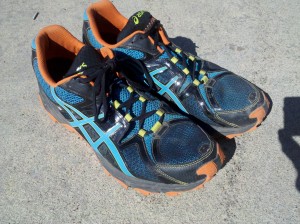 The upper of the Asics Gel Scout is a made from a thin mesh on the outside with a thicker mesh that rest against the foot provide comfort and a nice foot wrap.  The toe bumper on the Gel Scout isn’t exactly beefy, but it is there and gets the job done for 95% of toe bumps.  Around the outside of the heel there is a hard plastic that wraps around the heel and helps keep it in place.  On the inside of the Gel Scout you get a plush cushion system around the ankle providing a little extra security and helping keep rocks out.  The tongue of Gel Scout has a lacing garage to store your laces while on the run and it is connected to the upper so you to help keep rocks and dirt out lower on the shoe.  As far as sizing goes, the shoe fits true to size and the toe box is wide enough for most runners. 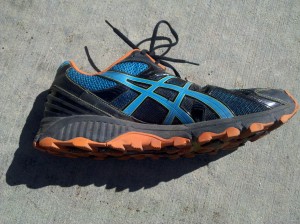 The midsole of the Asics Gel Scout is made from an EVA called Solyte that is made by Asics.  Combined with Gel in both the heel and toe box, and you get a super nice flowy ride while on the trails.  For the more technical trails, the Gel Scout also has a rock plate that helps keep your feet from feeling those sharp rocks. 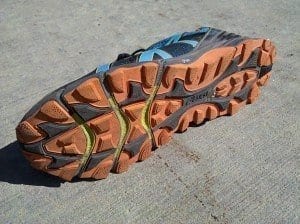 The outsole of the Asics Gel Scout has well positioned lugs to keep your feet on the trail.  And while the lugs on these shoes are not multi-directional, I haven’t noticed any slippage on my fast and technical trail runs.  As far as durability goes on the outsole, the rubber shoes only a small amount of wear which is expected after running many miles in these shoes.

My overall opinion of the Asics Gel Scout is very favorable and I give this shoe two big thumbs up!

For more info on the Gel Scout and other Asics footwear, visit www.asics.com.