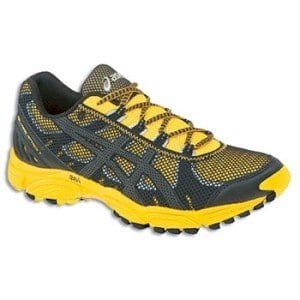 Whether you’re running on gnarly rocks and roots or gravel paths, the Asics Trail Attack 7 is sure to perform.  I’ve been testing this shoe out on a number of surfaces and I am happy to report back that there was not a surface that the Trail Attack 7 couldn’t handle.  The majority of trails I run are pretty technical because they are almost never level and they have a lot of rocks and roots you have to navigate.  To make sure this shoe could handle a milder trail, I also tested this shoe on gravel paths and pavement. 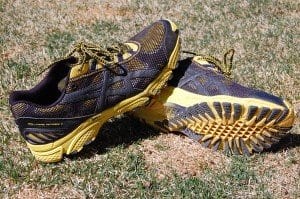 To allow for a maneuverability and traction on the trail, the tread of the Asics Trail Attack 7 has a varying tread pattern.  On the outside of the foot, there is a reverse tread pattern that will help you keep control on the downhill’s.  This is often the area of the foot that you land on while descending.  On the uphill’s, the tread on the inside of the foot is aggressive to help you climb uphill.  While running uphill, much of your weight is focused between the inner and middle of the forefoot. 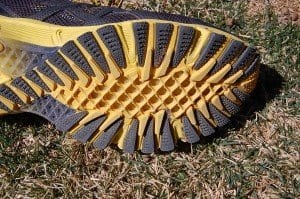 Continuing with the outsole, the Trail Attack 7 offers something that I haven’t seen before in other trail running shoes.  Between the midfoot and forefoot, there is a grate like surface that helps with both traction and reducing weight.  One of the worries I had when I saw these grates was that I would get rocks and other debris stuck in the shoe.  While testing, we found very limited amounts of rocks getting caught on more technical trails where rocks were too large to get stuck, but on some of the gravel trails where rocks were small, we found rocks to get stuck from time to time.  For toe protection, I found the toe bumper of the Asics Trail Attack 7 not to be super beefy, but it seemed to do the trick on the trails I was running. 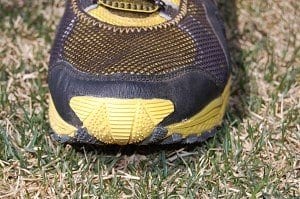 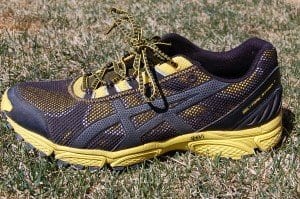 The outer of the Trail Attack 7 is has a snug fit and is covered by a thin mesh panel of fabric.  This shoe has a gusseted tongue that helps keep debris out, allowing you to enjoy the trail and not stop to pick rocks out of your shoe.  Weighing in at 11.7 oz., this shoe felt pretty light on my feet while running the trails, but I did not feel the reduction in weight sacrifices performance, something you need to look out for as shoe manufactures try to reduce weight in their shoes.

In the end, I was very happy with the performance of the Asics Trail Attack 7.  The shoe handled both technical trails as well as mild trails very well. For more information on the Trail Attack 7 and other Asics footwear, please visit www.asics.com.