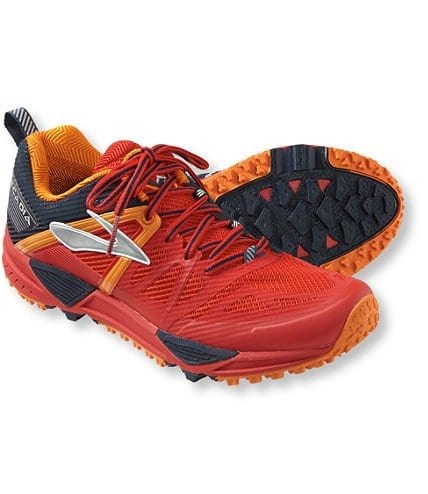 The Brooks Cascadia 10 trail running shoe is one of the best all around, do everything trail running shoes on the market. This shoe has gone through many updates over the years, but has always stayed true to the core of the shoe, which is a cushioned trail running shoe that works great on mild to technical trails and for both short and long distances. 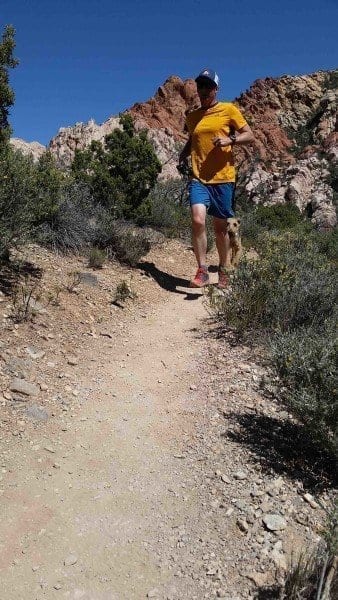 To test out the most recent version of the Brooks Cascadia, I tried to test out this shoe on every type of terrain available to me.  Since I received the Brooks Cascadia 10 in January, I had plenty of time to test it out in the snow, ice, and slush in Colorado.  The Brooks Cascadia 10 was plenty stable in all snow conditions giving credit to the upper of the shoe that hugs the foot extremely well.  To keep you stable on uneven snowpack, the Brooks Cascadia 10 uses Brooks BioMoGo DNA for midsole cushioning.  On chunky ice, the Rock plate performs as it’s supposed to keeping sharp pieces of ice from poking up into your foot.  As for running on ice, I recommend you using one of the traction devices listed in this winter traction guide.

As the trails began to thaw out, I tested the Brooks Cascadia 10 on wet and muddy trails.  While I don’t like to run in mud much because it’s not good for the trails, there are times when you just have to get down and dirty with some water and dirt. The outsole/midsole combo of the Brooks Cascadia 10 sits off the ground a good amount so when running through shallow mud puddles, the water doesn’t soak into the toe box.  Please note, this is not a Gore-Tex waterproof shoe and trail shoes are not meant to be waterproof unless they have a waterproof layer.  For traction in the mud, it all depends of the thickness of the mud and a shoes lugs.  The lugs on the Brooks Cascadia are moderate in length, so they will give you some good traction, but not great traction in super deep mud.  I tested the Cascadia 10’s in a little mud and the shoe handled well as I expected. 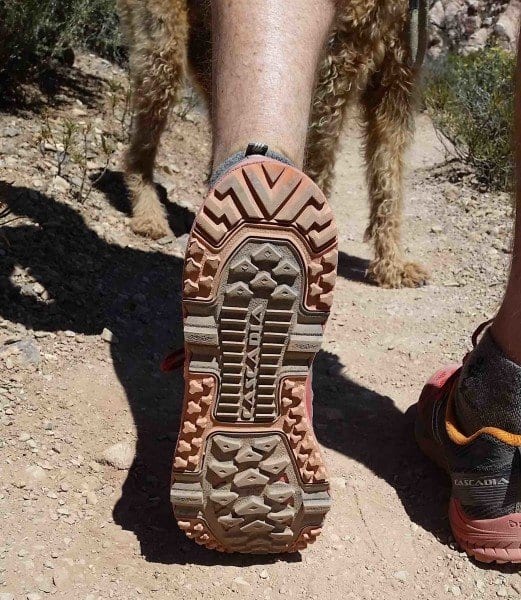 As you might imagine, the Brooks Cascadia does well on gravel paths and fire roads.  I personally think it is where the shoe shines compared to other trail running shoes on the market since it runs very similar to a road running shoe.  I was able to get up to a 20 mile run so far on gravel’ish trails along with lots of 10-15 milers and never ran into any hot spots or sore feet.

Some people ask can you run pavement with trail running shoes.  I typically keep my trails shoes for trails and my road shoes for the roads, but the Brooks Cascadia is an exception. This shoe handles roads just fine as long as your willing to carry a little extra weight from the beefier outsole. Keep in mind, I still recommend a road shoe if you’re going to be sticking mostly to roads. 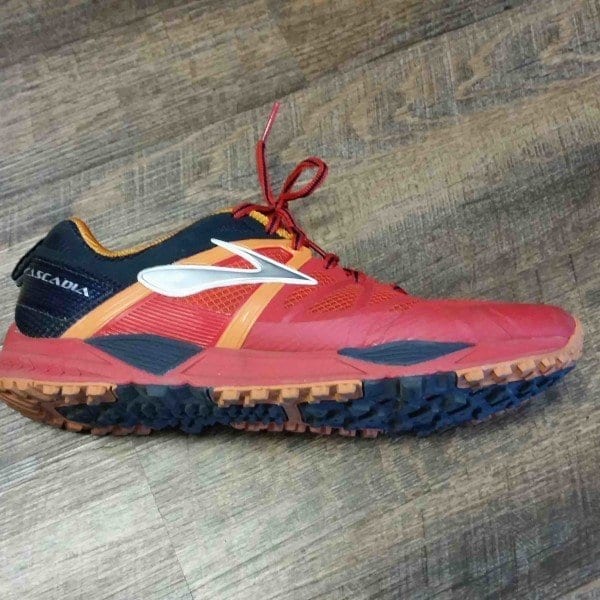 The Upper of the Brooks Cascadia 10 sees a few changes that some may like or dislike.  I am finding the Cascadia 10 has a little less room in the toebox and is a little more streamlined.  This means that it’s not going to be a great shoe for someone who has super wide feet, but if you have medium to slightly wide feet, you should be good.  I say this as I have one foot that has a regular width and one that is slightly wide. 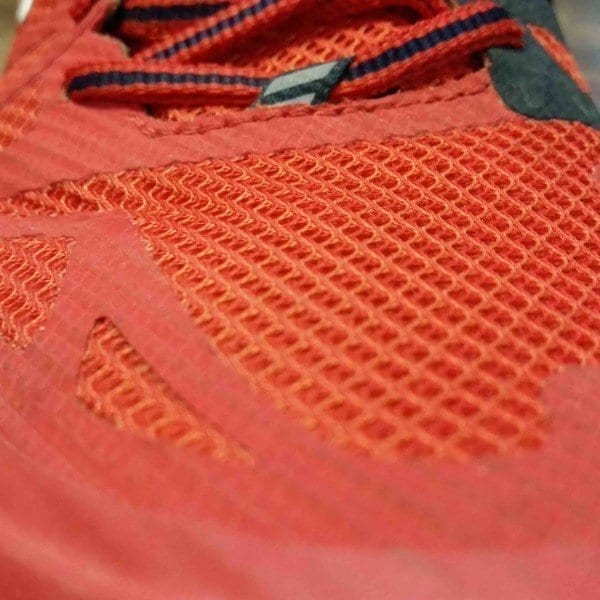 The mesh used in the Brooks Cascadia 10 is plenty breathable for those summer trails runs, but there is enough material to keep most dust and dirt out.  The padding around the heel of the foot has plenty of padding keeping your ankles secure, protected, and happy.

To add stability to the upper and keep your foot from blowing out of the shoe, Brooks uses only welded-on synthetic overlays on the upper of the Cascadia 10. This is one of the updates from the Brooks Cascadia 9 as part of the upper was stitched on with the 9’s. 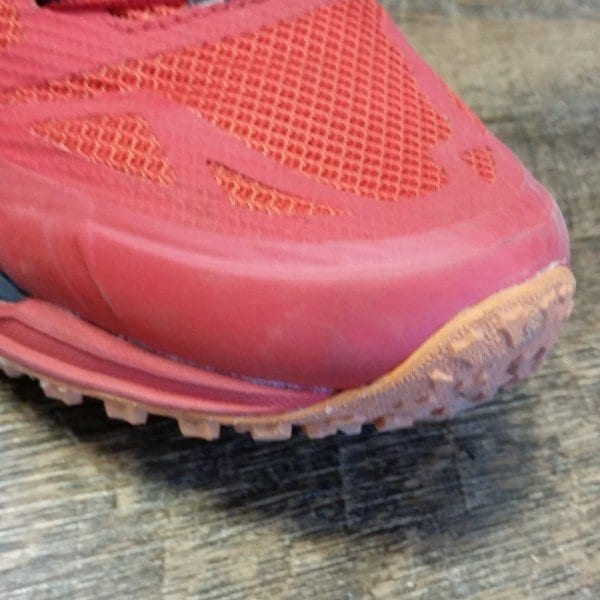 The toe bumper on the Brooks Cascadia 10 has enough rubber to keep your toes from getting too bruised, but it’s not heavy and overbuilt.  The bumper uses the same synthetic overlay as the rest of the shoe which also helps keep out water in the toe box.

The midsole of the Brooks Cascadia 10 uses Brooks BioMoGo DNA which adapts to each person’s foot strike. The DNA material gets firmer with heavier impacts so if you’re a heavier runner or tend to run on certain parts of your shoe, the midsole will adjust.

As mentioned above, the outsole of the Brooks Cascadia 10 performs great on all types of trail conditions.  The tread is aggressive enough to keep you on the trail at pretty much any speed but it doesn’t have overly aggressive lugs that might trip you up.  The lugs are multidirectional meaning they help you climb the uphills, break on the downhills, and keep you on your feet when going side to side.

The Brooks Cascadia continues to be one of the top trail running shoes on the market to beat, if not THE trail running shoe to beat.  It provides grip, cushion, durability, and is as reliable as they come.  For more information on the Cascadia and other Brooks Running products, visit www.brooksrunning.com