Brooks Running’s new Pure Project line has gotten a lot of attention in the running world over the last few months. Brooks took their time introducing a line of shoes for the minimalist/natural running crowd, and when they did, the results were shoes that are different from just about anything else on the market. The Pure Project line of shoes spans from the Connect (see our review of the Brooks Pure Connect here), which is the most stripped-down, “pure” experience in the line, with the Pure Flow adding a bit more heft and protection, and The Cadence has subtle stability features and better support for mild over-pronators. Lastly, Brooks wanted a trail-specific shoe in the line, and so they went to one of their sponsored athletes, ultramarathon-stud Scott Jurek to help them develop the Pure Grit. Scott routinely rips off 150-mile weeks so you know he put this shoe through some serious punishment, and he seems to have good taste as well, as our dark grey/lime green colorway looks fast even sitting in the closet. 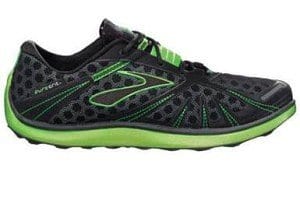 The Pure Grit is a unique shoe – the most distinctive feature on first examination is the profile of the midsole/outsole. When viewing the shoe from the side, the bottom of the shoe has a rounded shape, somewhat built up under the midfoot with less material underfoot in the rear and forefoot. This feature feels somewhat odd when walking, but on the run I felt as though it encouraged an efficient midfoot-strike and made me want to turn over quickly. This is definitely a fast-feeling shoe. The BioMoGo midsole material is one of my favorites for its great-feeling cushion and good rebound, and I liked this shoe’s ride  enough to put the Grit into fairly heavy training rotation, even on the roads. It weighs in at 8.7oz. for mens size 9- light enough to be called a performance trainer for sure, and even compete with substantial racing flats.  Remember that the lighter-weight shoes typically wear out faster, and Brooks recommends replacing anything from the Pure Project Line after about 300 miles. 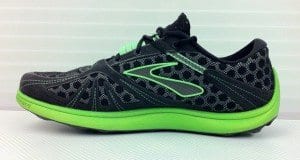 The upper of the Pure Grit is true to the Pure Project philosophy, and is made of airy, breathable mesh that I think ventilates as well as any I’ve tested- I even had to make sure to wear warmer socks when the temps dipped to avoid chilly toes. Reinforcing pieces in the upper are welded for seam elimination and made from a supportive yet pliable microsuede. An elastic piece. that Brooks calls the Nav Band, bridges the sides of the upper, over the laces, and is supposed to aid in locking down the foot. I felt this piece to be mostly superfluous, as it became rather loose when the shoe was tightly laced. The toebox of the Pure Grit is wide enough to allow plenty of toe splay. I think this shoe runs approximately half a size large, so be sure to try it on before buying, or size down a half-size from your typical Brooks size. Overall, the upper of the Pure Grit is very comfortable and sufficiently-supportive in most cases, but for my taste, could use a bit more substantial reinforcement for running on aggressive trails- I sometimes felt my foot slipping around in the shoe on trails or off-camber surfaces. 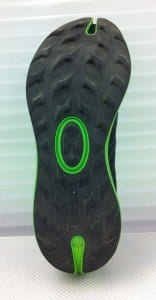 The outsole of the Grit is also unique, made up of a nice sticky compound and widely spaced fins, oriented toward the rear on the forefoot for good traction up hills, and the front on the heel of the shoe for good braking when going downhill. I felt that traction was great on all surfaces but wet stone or metal, where the Grit’s outsole compound has little traction. The midsole and outsole are notched out under the toes beneath the large toe and second toe. This is intended to provide some extra flexibility in the forefoot, and to help align the big toe for toe-off.  I could not feel this notch with my foot in the shoe (you don’t actually feel any toe separation), and I can’t really say I was aware of a performance difference due to this feature.

Overall, the Brooks Pure Grit is an incredible debut trail shoe, with an incredible ride for mid- to forefoot strikers.  I highly recommend Pure Grit for neutral runners looking for a shoe to take them from the roads to the trails… quickly! 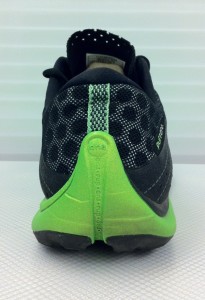 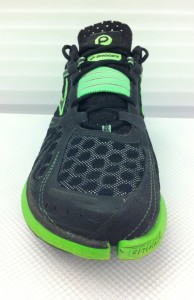