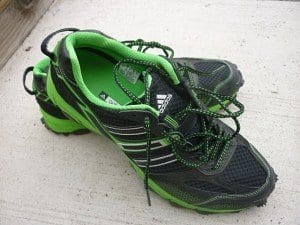 Although the adidas Adizero XT Trail is advertised as a go anywhere shoe, it’s hard to believe anyone would run this anywhere but the trail. While I liked it on the trail, the composition of the shoe (especially the outsole) just doesn’t lend itself to anything but running on trails. It did run well, though, and brought me a step closer to shedding my bias against the Adidas running lineup (I said closer, not completely).

What’s cool about these it that they approach the trail shoe market from a different angle. Most companies tend to build a bulky trail shoe, and then concentrate on stripping down. The shoes literally feel like Adidas soccer shoes do – secure wrap around the entire fore foot (including a tight toe box) and a high, stiffly snug heel that requires a bit of adjustment. One of the reasons for my bias against the running line up is that I know what Adidas is capable of – I wore nothing but Copa’s throughout my entire soccer career – and the running line up has left me wanting more in the past. Not so with the Adizero XT trail, which required literally no breaking in, and were comfortable right out of the box. 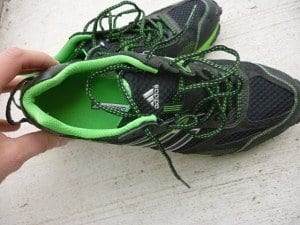 There certainly isn’t a lack of traction. The outsized lugs are a bit aggressive, and tend to be a bit uncomfortable on hard-packed trails. But when faced with soft and slippery conditions, they really held well. Even on wet slick-rock, they seemed to hold traction really well. I found myself bouncing from boulder to boulder just to try to get them to slip, which was pretty fun. I also liked how stiff they were – they protected the soft underfoot without being too unyielding. I like it when I can feel a trail under my feet, and I have to give it to them, Adidas got it just right here. The lacing secure was also very secure, and didn’t slip or come untied. 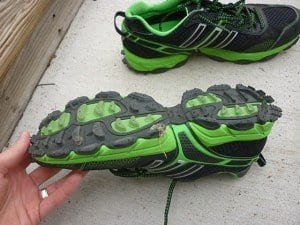 The bottom line – if you run a lot of soft, wet trails or live in a slightly damp climate, these are for you. If you take them on the pavement, don’t say I didn’t warn you. For more information on the  Adizero XT Trail and other adidas footwear, visit www.amazon.com/adidas.