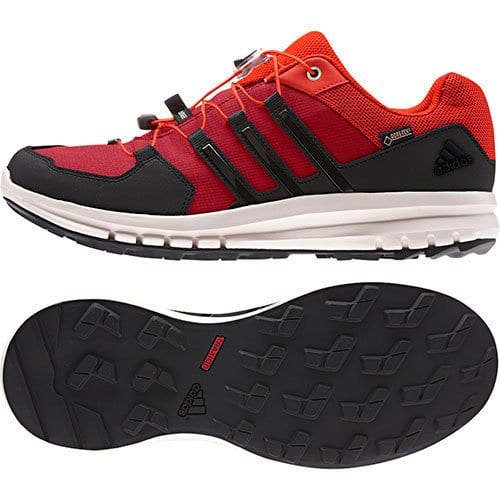 The Adidas Duramo Cross X GTX kicks I’ve been testing are the go-anywhere, do-anything sports utility vehicles of running shoes. Packed with technology, engineered for durable performance, and designed with good looks, I’ve found my new go-to trail runners in these shoes. Adidas says the Duramo Cross X GTX shoes reflect the perfect combination of outdoor and running pedigree. My testing for the past month has me convinced this is the case. These shoes have been through mud, sand, and rain. I’ve run and hiked in them. And I’ve worn them casually around town. They’ve performed well in all respects. They’ve also become a favorite pair of shoes for squats and deadlifts in the gym thanks to their good balance, firm underfoot feel, and grip for secure footing.

A list of the branded materials incorporated into these shoes reads like a who’s-who of highly engineered footwear goodies: Gore-Tex, Traxion, Adiprene+, OrthoLite… The bottom line is that feet remain dry, warm, comfortable, and stable on off-road terrain in these shoes. 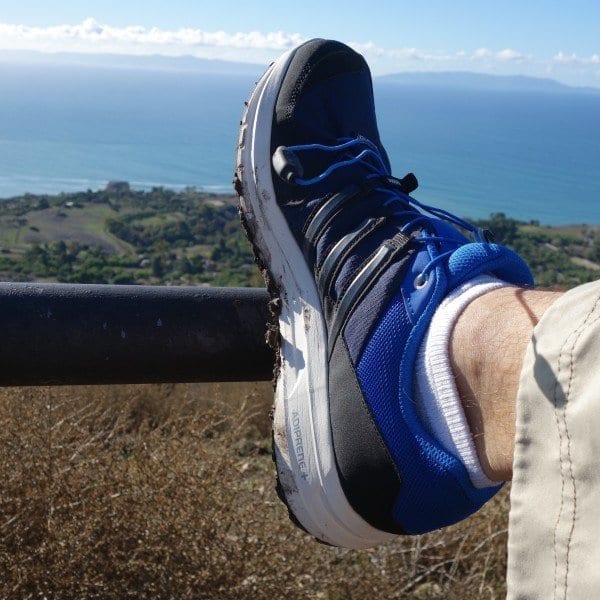 In torrential rains that soaked Los Angeles this month, I took the Gore-Tex-equipped Duramos out for a few miles on a trail run. Although conditions were miserable, the shoes performed very well. My feet remained dry even as the rest of me sopped. Just as important as the dry feel was the fact that the shoes did not absorb rainwater during the outing. They kept their shape and didn’t pick up any noticeable weight. Thanks in part to the Gore-Tex technology, the shoes are rated at 12 oz. dry, which, for an off-roader, is pretty good. These shoes feel lighter than that during regular wear, perhaps because their weight distribution feels very balanced. Unlike some other running shoes, the heel is not disproportionately hefty.

My outing in the rain also gave the Traxion outsole a chance to shine. The outsole is formatted in a repeating L-shaped lug pattern. Not quite cleats, but more pronounced than most running shoe outsoles, the Traxion rubber gripped well on off-road surfaces and wet asphalt. It also released mud and grime with ease. After my run, I kicked the shoes against a curb a couple of times, which pretty much got rid of the underfoot dirt. Notably, during another rainy outing, I ran on the Strand, a long sidewalk that winds along the Pacific coast in Southern California. In many places the sidewalk surface felt especially slick in these shoes. Rougher asphalt provided more confidence and allowed for a faster pace during on-road running. During a post-rains hike, the Traxion outsoles performed well on mud and clay. The adhesive mix of soils was clingy and stuck to everything, including the shoes’ outsoles. Nevertheless, the lug design allowed me to simply “walk off” the mud. The absence of deep and narrow grooves in the outsole provides an easy release for even very sticky mud. Traction and grip was generally very good during the hike, even though, given the conditions, a more aggressive outsole really was called for. 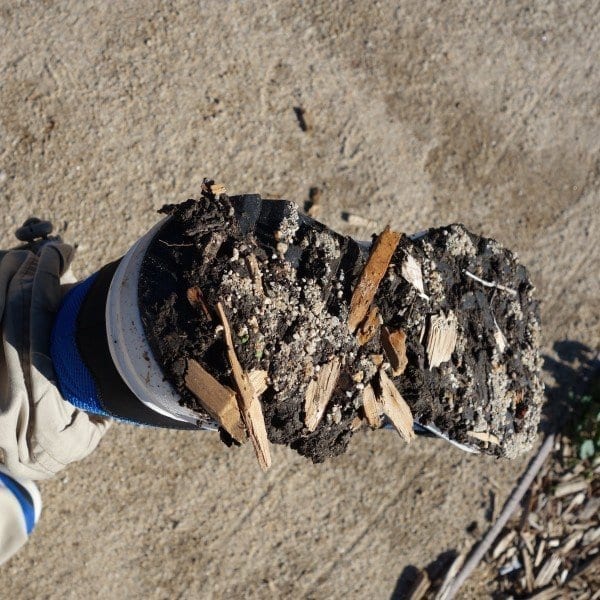 Adidas Duramo Cross X GTX Traxion outsoles performed well, even up against thick, sticky clay and mud encountered on a hike. The shoes enabled even this mess to be “walked off” without trouble.

Adiprene+ cushioning is found throughout the shoes’ midsoles. It’s a great cushioning choice for trail running because it’s sturdy enough to stand up to uneven ground. As I ran in these shoes, I never had the sense I was “bouncing” over rough terrain. Instead, I felt grounded and able to maintain stability when unanticipated rocks or bumps appeared in my path. The Adiprene+ system is complemented by OrthoLite performance insoles. The insole is designed to wick away moisture, provide long-lasting cushioning, inhibit odor and fungus, and allow airflow. To date, I have no reason to question these claims. The shoes have felt good on my feet and have not developed any odor after intensive use. The Adiprene+ and OrthoLite midsole/insole cushioning combination does not compress as much as some other cushioning solutions. I like this feel for trail running, and it also makes for a great weight room shoe. It’s common knowledge in the gym that performing squats and deadlifts in running shoes is reserved for future patrons of the ER. One reason is because the cushioning of running shoes compresses unevenly under the weight of the lifts. This causes instability and poor form. A second reason is heel height. Running shoes with tall heels can de-emphasize ankle mobility and hurt form, leading to injury. Although the Adidas Duramo Cross X GTX shoes aren’t made for weights, and even though they do have a heel-to-toe drop of 10mm (i.e., a bit more than truly minimalist shoes), they feel very stable and consistent under heavy loads. The footbed also feels flat, enabling good heel contact. I credit this performance to the Adiprene+ and OrthoLite cushioning employed in the shoes.

For as great as the Adidas Duramo Cross X GTX shoes are, I have not yet been able to understand the “speed lacing” system they employ. Rather than use traditional shoelaces, which seem to have pretty well solved the riddle of how to best attach shoes to feet, the Duramos use a closed-loop cord that winds through shoelace eyelets built into the upper. The cord’s tightness (and hence shoe tightness) is regulated by a spring-loaded cinch. Excess cord can be tucked through a built-in “Lace Bungee” to (sort of) keep the material from flopping around while running. 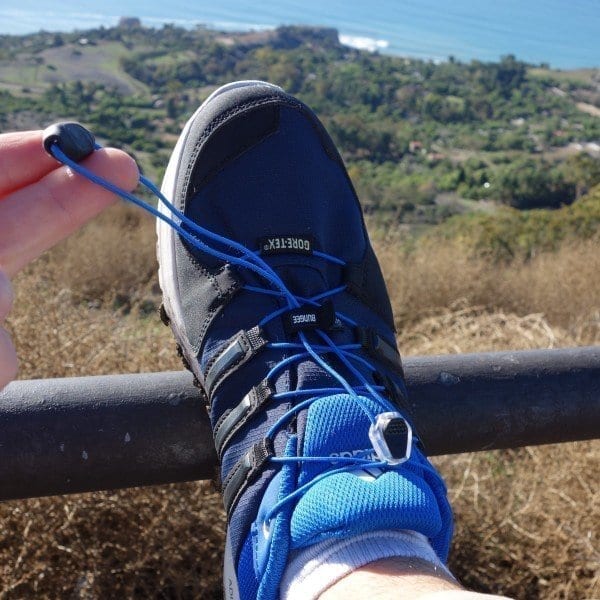 The setup is hard to use. It doesn’t perform as well as traditional laces for precision tightening. I don’t understand the “speed lacing” name since this system takes more time than regular double-knotting. And the system has some design flaws in that the extra cord length can be a tripping hazard. I guess maybe the system looks kind of cool, if I’m forced to find a positive. As I think about this feature of the shoes, I have to shake my head in wonder. These shoes would be much better with regular laces. I intend to replace the single-loop cord with traditional laces in the near term. Perhaps Adidas should include conventional laces in the box with these shoes in case other users are so inclined to switch. 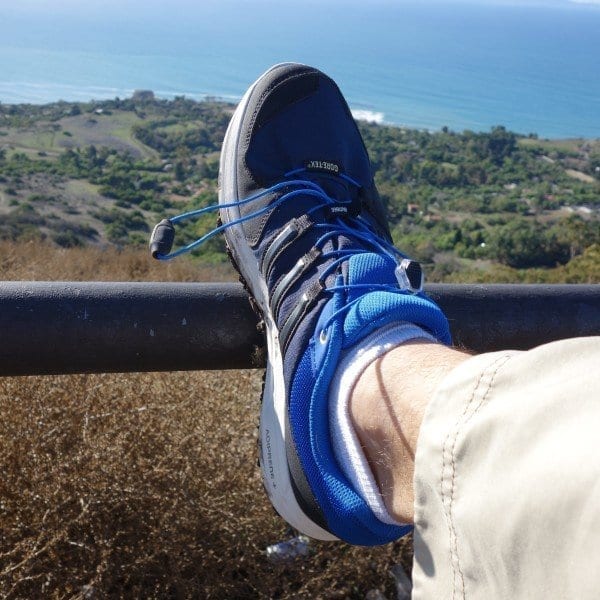 I intend to replace the bungee cord with traditional shoelaces on these Adidas Duramo Cross X GTX shoes.

Who Adidas Duramo Cross X GTX Running Shoes Are For

These off-roaders do trail running extremely well. They’re also good for day hikes. The Gore-Tex keeps things dry and warm, even in crummy conditions. And the Traxion outsole is very good for stability and grip when you’re off the beaten path. Adiprene+ and OrthoLite cushioning is comfortable and enables good contact with the ground. All in all, these shoes recommend themselves for anyone who wants a solid runner that won’t let them down on tough terrain or who enjoys fast hiking. I also found these shoes to be good “tweeners” that allow me to weight train and trail run without having to change footwear on leg days. These high-tech trainers are a very good choice for those with an aversion to treadmills and a love for outdoor trailblazing.

The Adidas Duramo Cross X GTX shoes fit comfortably in my normal size. However, if in doubt, my recommendation would be to order a half-size below your normal number. If anything, these shoes run ever so slightly large. The width is great for me; however, my feet are relatively narrow. For people with very wide feet, these shoes may be a bit on the narrow side.