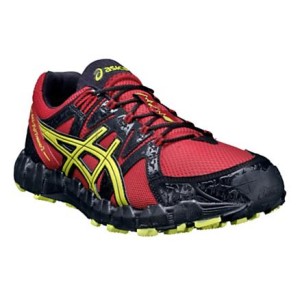 Long a juggernaut in the active gear industry, Asics has a large line up of shoes for just about any activity you can think of. It’s no surprise that Asics is all in on the trail running scene, offering a variety of choices for trail running enthusiasts around the globe. The Gel-Fujitrainer is the latest in trail running options for this spring/summer, and it definitely lives up to the excellent reputation Asics has built around the globe.

It’s interesting, though, that Asics marks this shoe a “trainer” specifically, as my initial impressions in pulling the shoe right out of the box bore up during the testing phase. The Gel-Fujitrainer 2 is following the trend in trail running shoes this year to strip down, get lightweight, and get a better feel for the trail – all while attempting to provide the foot protection needed to run on the varying terrain that running off road will entail. In your hand, the shoe just feels race inspired; it’s lightweight (asics doesn’t provide an exact weight on it), flexes easily both laterally and torsionally, and the tread pattern (while aggressive in placement, we’ll get to that later) appears to be designed with fluidity and softness rather than the heavy duty lugs we’ve grown accustomed to seeing in other trail offerings. The fuji-trainer is absolutely race inspired, even if it isn’t marked as such. 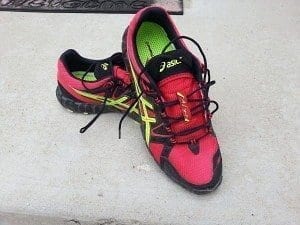 Even the styling of the shoe just looks fast.

I received the gel-fujitrainer 2 early this spring, but a slew of winter storms had the trail systems in Colorado (especially where I test) reduced to a sloppy series of small rivers. My first test runs in this shoe were actually in the desert environment of New Mexico, and then next up in the Rockies near Pagosa Springs, where a freak blizzard cut one of training runs short. After these two runs of distances up to 8 miles, I was able to get a few training runs on my normal trails featuring a variety of terrain. In New Mexico, the terrain was largely dry, with consistency varying from an almost clay like texture to sand. Pagosa Springs trails were very rocky, but damp; I ran on large amounts of slick rock here. My local trails offer scree, slick rock, dirt, and gravel mixed in. All together, the only condition I didn’t test in over a four week period was extreme mud, which the shoe isn’t really designed for, anyway. 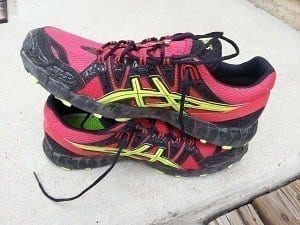 Check the upper – definitely designed to keep you cool on those hot trail days.

The upper is made up largely of mesh with a sort of rubberized/plastic feeling material thrown in to reinforce high wear areas. I really liked the mesh for warm weather runs; the shoe is ventilated very well, and kept my feet cool and dry during warm runs without letting dirt and debris in. I was particularly impressed that in sandy climates, I didn’t have any debris in my shoe (other than normal) after my run. The toe is reinforced with a rubber bumper as well; this did protect my foot from smaller debris and minor impacts, but it is also stripped down to match the rest of the shoe design. It is not designed for heavy impacts. 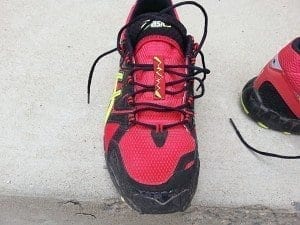 The toe bumper will shield you from small debris, but watch out for large boulders.

The midsole of the shoe is a nice touch, as this is where the shoe picks up some new(ish) technology from Asics. Asics has long used either EVA or SpEVA for their midsole material; Solyte is used here. While the trademark feel of Asics remains present, Solyte feels just a bit cushier and plush. I thought at first that this would provide for lack of trail feel, but I was wrong. The midsole provided just the right amount of cushioning when out on the trail, without sacrificing balance and stability. This is not, however, a stability shoe. For those looking for pronation correction, look elsewhere – the gel-fujitrainer 2 is a neutral cushioned shoe, and does not correct the natural roll of your foot.

The outsole uses AHAR from Asics, which stand for “Asics High Abrasion Rubber.” It’s supposed to enhance the longevity/durability of the outsole.  What I liked about the lug placement on the shoe was that it was aggressive enough to provide traction on all surfaces, but minimal enough so that hard packed sections of trail, flat rock, and gravel surfaces where not uncomfortable to run on. I was slightly disappointed in the fact that Asics advertised that the tread pattern was specifically designed to get great traction on downhill sections; I found that the tread pattern was no better or worse than your average trail shoe in terms of traction. I was surefooted on about 80% of the surfaces I ran on. 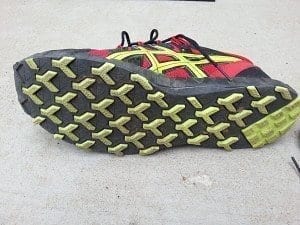 The tread was great on most surfaces, but foregoes a heavy lug pattern in favor of balanced, evenly spaced bars.

Overall, I would recommend the shoe for those looking for a neutral cushioned trail shoe that is very versatile in the conditions it can tackle. It’s lightweight design lends it to running very well over rolling trails and dry conditions, but is not beefy enough to adeptly tackle very technical/craggy trail sections. It only comes in the red/black/yellow color scheme for men, so for other colors you’ll need to look elsewhere. For the pricepoint of $100, you really get a great deal for a dependable trail shoe; and as an added bonus, you won’t have to deal with your laces flopping around on you (it’s got a lace pocket on the tongue.) Head on over to https://www.asics.com/ to find them.