Garmont is a company that is most well known for their ski boots, but recently they ventured into the ever expanding trail shoe market. They have come into the market with several shoes hitting different segments. The Bolt DL is part of Garmont’s 9.81 line as a lightweight trainer or racer and is a well thought out and put together first effort from the venerable boot manufacturer.

The Bolt comes in with many features seen on the top model shoes. The shoe is secured with the cinching system made popular by Salomon. This eliminates loose or undone laces and like Salomon there is a small pocket that the excess strapping fits into. The tongue is gusseted to keep out the pebbles, rocks and grit from the trail. The upper material has plenty of flex and offers good breathability. It is a low profile shoe which helps to keep down weight, as does the liquid rubber toe cap. 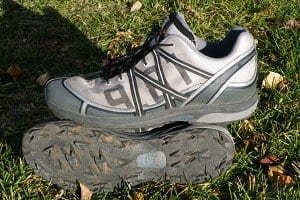 The Bolt from Garmont is a great mix of light weight, flexibility and protection. Photo: A. Johnson

On the trail the Bolt proved an efficient and nimble shoe. Weighing in at  11.2 ounces for a men’s size 9 U.S. it’s on the light side of a trail shoe but is certainly no minimalist. On surfaces ranging from loose gravel to dirt and some rocky sections the flexibility and low weight of the shoe was welcomed. The OrthLite footbed provided me with ample cushioning. It wasn’t too soft and spongy, something I hate in shoes, but it gave more cushion than other light weight trainers I’ve used. On the short pavement sections the Bolt was had just enough cushion for a few miles, any more than that and you may start to feel the pounding. But this shoe is meant for soft surfaces so I can’t complain. 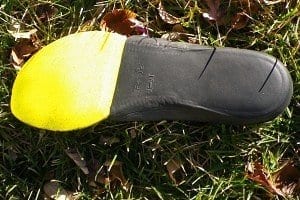 The Ortholite footbed in the Bolt uses different densities for a nice ride. Photo: A.Johnson

Being a lower profile than some other trail shoes I did get a bit more dirt and soil in the shoe around the ankle, but it was minimal at best and a trade off I’m happy to make to keep the weight down. The Bolt has a unique lug pattern that while sparse offers a lot of traction. The lugs look like arrows and are positioned around the perimeter of the shoe, then sparingly under the foot. With fewer lugs the Bolt remains flexible and combined with the soft rubber compound it has confidence inspiring traction.  The extra lacing did pop out of the holding pocket due to the lace having to be tucked in over the top rather than slid up underneath like the Salomon. This wasn’t a common occurrence and was easily fixed. 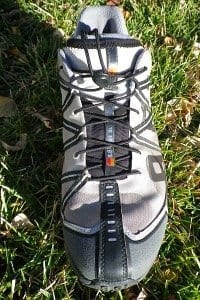 The cinch up lacing system is a nice feature, though the extra lacing occasionally came out from the pocket. Photo: A. Johnson

The size 10 fit me very well, snug through the heel but with good room through the forefoot. I usually range between a 9.5 or 10, so if you are in the middle of a size choose the larger of the two. The webbing along the outside attaches to two anchor points on the lacing system which helps keep the fit dialed in all run long. It doesn’t look like much, but it’s a detail that many miss, especially those companies that are not specific to the trail shoe market.

Garmont obviously put plenty of thought and time into the Bolt DL before launching it. The specific details like the lacing system, the soft outsole, Ortholite footbed and light weight, flexible upper give this shoe a strong presence in the light weight training market. Check out more at www.981.it/eng/.