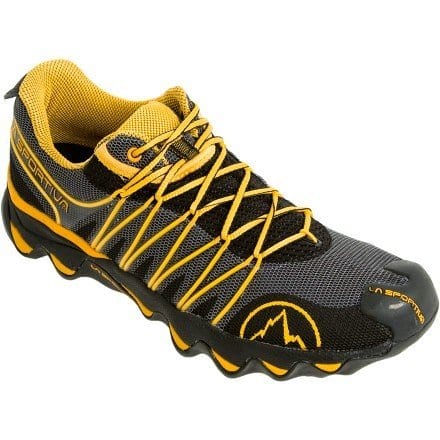 For the trail runner that is looking for a plush ride on the trails while being able to stick to the trail surface, the La Sportiva Quantum is a must see.  When I first received this shoe to test, I was very skeptical about the outsole and whether it would hold to the trail.  It is different than anything I have seen from the trail running manufactures and by the looks of it, you would think the wavy bottom wouldn’t allow for any traction.  After I got over the looks of the outsole, I took the La Sportiva Quantum’s out for a spin.  Living in Colorado, we have a lot of rocky dry technical trails with steep ascents and descents.  To test out the Quantum’s, I decided to see how they held up on the very rocky technical trails.  To my surprise, these shoes gripped amazing on rocks and roots.  One of the reasons for the great grip is the rubber compound that La Sportiva uses.  It uses its own rubber called Friction X.  With La Sportiva’s background in climbing where sticky rubber is so important, they have been able to make a nice transition to the trail running scene.  Another reason the shoe sticks well to technical trails is because of the soft blown EVA and PU in the midsole.  Instead of holding stiff on surfaces like many trail shoes, the outsole in a way wraps around what you are stepping on to give you excellent grip.  While running in the snow on very wet surfaces, we found the shoes to lose the great grip, so it is best to stick to the dryer trails.

The La Sportiva Quantum has a very snug fit, so if you are looking to make a purchase, I suggest going up a half to full size.  When I first took these trail running shoes out, I found the snug fit to disappear after a half mile, but out of the box they seem to be almost too snug.   The Quantum’s weigh in at 12.9 oz. which is a little heavy for a trail running shoe, so if you are looking for a minimalist shoe, we suggest you looking somewhere else.  While out on my runs, I didn’t find the shoe to be heavy though.  For the heal to toe drop, the Quantum runs 31mm in the heel and 20mm in the toe, which gives you a 11mm drop.   If you tend to stub your toes from time to time on trail runs, it is nice to know the Quantum has a nice toe bumper.  As for durability and longevity of the Quantum, I found the shoe to provide a comfy ride on both trails runs between 3-5 miles and longer trail runs ranging from 18-25 miles.

One thing that I stumbled upon with the Quantum’s is that they perform pretty well on pavement.  I was planning on doing a long run while in a Vail, CO and the trails were pretty super sloppy and muddy.  I ended up running on a paved path for 18 miles and I felt like I was running in a road shoe, definitely something I was not expecting.  While I would not suggest buying these shoes for the road, it is nice to know they can make the transition.  The La Sportiva Quantum retails for $115 which I find to be a fair price for a quality pair of trail running shoes.  Overall, while I was skeptical about the performance of the outsole, I am very pleased with the performance of the La Sportiva Quantum’s. For more information visit sportiva.com