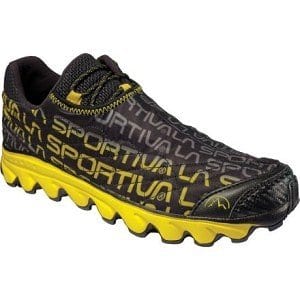 If this were a gossip rag, the headline for the La Sportiva Vertical K would Read, “Monster Trucker and Ballerina Produce Offspring”.

Initially, everything about this shoe seems slightly unusual. It is ridiculously light and flexible.  The apparent heel pull loop is off center.  It looks perfectly smooth.  There is no tongue, per se, but the upper flaps over to one side. The wavy, Warhol-inspired banana cut-outs in the mid-sole/outsole look unlike anything else on the market.   It was as if La Sportiva decided to rethink running shoes. 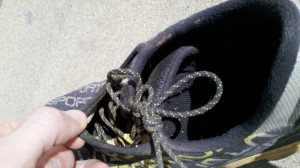 The upper of the Vertical K is a combination of mesh with a full stretch-lycra gaiter over it, which acts as a scree guard.  Underneath the laces, this one-piece upper wraps over the top of the foot, which means the traditional, centered tongue is no longer necessary.  (It also means your foot feels nicely enveloped.)  The shoe is built around an ergonomic last (as opposed to a traditional one) which further emphasizes the glove-fit feel of the shoe.   Aside from the flap-over, the upper is virtually seamless. I’m not a sockless runner, but with thin socks, the upper was very taut, and did not cause any irritation. There is a small, rear-mounted chord loop which I use for pulling on my shoe, but could also be used to hook the K’s to a pack or harness.  LaSpo clearly assumes you will be on knarly trail with this shoe, because despite their weight-conscious design, they didn’t skip the toe bumper, which is a hearty woven material.   The slightly-padded heal cup further represents this shoe’s just-enough-and-no-more philosophy.

My biggest concern about the Vertical K was it’s ability to accommodate my personal preference for no-tie laces over stock ones.   Swapping out the laces on the original Crosslites took as long (and was as painful) as any 50k I’ve run. So I thought the gaiter would make it near impossible on the Vertical K.   But the Vertical Ks have a much more flexible upper and use a Ghisallo lacing system, as opposed to eyelits, so the whole swap-out process to Lock Laces was a breeze.

With that concerned allayed, the rest of this shoe bares little resemblance to the other La Sportiva models I have owned, except for the  familiar black and yellow combination and and the clear brand name presentation on the upper.

This shoe comes together as a superb, dedicated trail racer. It’s lighter than my triathlon running shoes, and only slightly heavier than my road flats. But it doesn’t waiver about where it’s meant to be used. The outsole is pure single track, and I wouldn’t waste any of its precious stickiness or trail feel scoffing it off on pavement.  Sometimes shoe companies talk about the “feel” of their shoes as if they’re warning that you’re going to feel a lot of pain, as the jagged points of rocks and roots are transferred through their negligibly-cushioned bottoms.  So after tackling some very rocky descents without wincing, I realized I wasn’t going have to worry about sensitivity as I do with minimal trail flats, and was inspired to pick up the pace.  La Sportiva’s interpretation of “feel” can be attributed to the company’s MorphoDynamic midsole design, which literally morphs around and adapts to the uneven and sharp terrain, giving you a surprisingly smooth ride.  PU Foam and Ergonomic EVA absorb and reduce impact.  The outsole is made from a Sticky FriXion SF rubber, which ensures solid traction on all surfaces.   This midsole/outsole design combination brings a huge amount of confidence to your run. 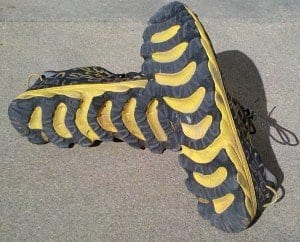 My only caveat so far with this shoe relates to its sizing. I’ve had a lot of trail shoes the past few years and have always ordered a 10, regardless of the size up or down recommendations of reviewers. But in this case, heed the advice.  You will be unhappy if you don’t order up a half to a whole size.  Mine were listed as a European 43.5 (US 10.5), and even at a half size larger than my usual, I wouldn’t use anything but a very thin sock to be comfortable.

I’ve taken the Vertical Ks on several training runs, including two 13-mile trail runs through some pretty rocky and gritty terrain.  I would say that is just where these shoes perform at their best. Unfortunately, with the lack of rain in Southern California this year, I haven’t been able to run the Vertical K through any substantial slop. I’m curious if those banana impressions in the outsole will fill up with mud, and what effect that might have on the shoe’s outstanding traction and feel.  I will comment later on that as I have the chance to experience it.

While this shoe was in transport, I was considering using it in an upcoming trail half marathon. But after noting that over half of the course is on pavement and fire road, I decided I wouldn’t want to waste this shoe’s precious tread on so much asphalt. My experience with rubber compounds on shoes and tires is there is always going to be a trade off between stickiness and durability.   I will watch the wear levels on these to see how they stand the test of time and mileage.

I suspect La Sportiva will do well with the Vertical K.  This is a focused, fast, dedicated trail shoe, and a great choice for people who are not willing to compromise comfort for light weight. 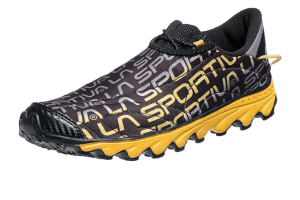