Newton hit the scene a few years back with a simple Mantra: Run Better. This somewhat lofty goal has inspired them to design a create a type of shoe which literally guides your foot into a more neutral type of running form. Running in a Newton shoe is a unique experience in and of itself for that reason – it was literally designed for a neutral gaited, forefoot-striking runner. Barefoot running being the big craze right now, Newton is enjoying pretty big popularity in the running community right now. In fact, Newton has the distinction of being the only company marketing specifically to this crowd – all of their eggs are in one basket, so to speak. The big question is as follows: is Newton worth the hype?

First off – I’m a fan of the studying one’s own gait to become a more balanced and efficient runner. I began like a lot of runners did; I was simply interested in an alternative to pain. Not that good, I just PR’d my favorite 10 mile run pain, but bad pain. I had the various assortment of runner’s ailments, and wanted to know if there was another way. What struck me about the “barefoot” movement was the simple fact that humans have been running since the dawn of humanity – but we’ve only had heavily cushioned shoes for the past few decades. So I became interested, became educated, and took notice of my own body mechanics. What resulted was not only a more efficient gait, but also a change in shoes. 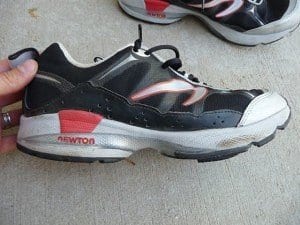 If you haven’t had any experience in a Newton shoe – go slow. We’ll start out with the unique feel that, per Newton’s website, differentiates Newton from all other shoe companies, and then get down to the nitty gritty of how they compare (performance wise) to all the other shoes we test here at AGR. Certainly, no other shoe I’ve tested has on outsole quite like what I found here. There first thing that strikes you right out of the box is that instead of having an aggressive lug pattern on the heel, it’s actually placed underneath the forefoot, right near the ball of your foot. Newton labels this Action/Reaction technology – right in line with the Newtonian theme of the company. Essentially, this acts like a lever under your feet. If you hold the shoe level, you’ll actually see that the highest point of the lug is on the same plane as the heel of the shoe. When you land (flat footed), all of your forward momentum carries you down the lever of the lug. The strike is the action, and the reaction is the roll of the shoe.

The reason for the advice of taking it slow is that for a runner who is already adjusted to a forefoot strike the feel is slightly unsettling. For a runner who has always run with a heel strike the feel would be downright intimidating. As this particular shoe has a very high platform, (I’m looking forward to testing out the more of the lineup to see just how high the platform runs for all shoes) it doesn’t have a whole lot of feel for the ground. The platform felt much like a traditional stability shoe does, except with slightly firmer cushioning. What this high platform means is that when first running in the shoe, you’ll feel slightly off balance. It’ll fade after a few runs, but I’d limit the runs to less than four or five miles right out of the gate. This feeling, however, is very much inline with the marketing of the shoe. Newton has this shoe listed as a guidance trainer, and from the first step out the door, the platform performs exactly like this. 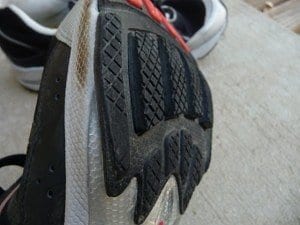 Newton also took it one step further with the Terra Momentus in order to fill a large gap in their lineup. I assume the pressure for this came from the success they’ve been enjoying over the past few years, with all sorts of runners and triathletes flocking to the cause. What’s interesting about the strategy is that instead of just coming right out and making a full blow trail shoe, Newton chose to make what they call an “All-Terrain Trainer.” I’m not sure if they will follow up with a dedicated trail shoe next season, or not. Either way, it’s a fairly astute move; if this shoe isn’t a great sell, they don’t have to move into the trail market, and haven’t lost much since they can market it as a road shoe as well. My only issue is this – generally products designed to do everything well end up being middle of the road in comparison to other products out there.

Now for the aforementioned nitty gritty – how’d the testing go? True to form, we took the Newton Terra Momentus on just about every terrain out there, even for a short 5k treadmill jaunt. To begin with, however, I just stepped out the front door and hit the pavement. I liked the feel of the shoe for even paced road runs. As I mentioned above, there isn’t a whole lot of feel for the ground in this shoe due to the level of cushion it’s built with. However, on an even surface the feel of the lugs is fairly remarkable. Remember, this is the first Newton product I’ve taken for a spin, and I really like the roll off that the raised lugs give you. Other testers remarked on a sort of “break-in” period; I liked the distinct feel after only a few short blocks.

Trails were quite a different matter for the shoe, however. While I really like the feel of the aggressive lugs on the road (and also on even gravel trails – really, any surface where the grading is even and steady), on the trail it’s not so much of a treat. The shoe feels just a bit imbalanced on the more aggressive terrain that Colorado tends to present. If I had a chance, I’d love to try them on the smooth, fast paced trails of the West Coast – I bet they’d just absolutely fly. Here in Colorado, though, where most of the trails I run on are extremely rocky they just weren’t my first choice. The outsole tended to lose traction when climbing, especially in slick or damp conditions. On trails that were especially narrow, the high platform tended to roll from side to side underfoot. While I didn’t sustain any ankle damage during my testing, I always felt like I was about to.

The fit of the shoe overall is a bit snug right out of the box, which Newton freely admits. I’d try them out at your favorite running store before purchasing them online unless the return policy is really easy to work with. I chose to stay with my regular size; I didn’t regret the choice, but my feet just seemed to be shaped to fit the smaller sizing that Newton had to offer. I really like how the fit of the upper kept my feet secure and blister free no matter what environment I was running in. Newton chose a superb pattern of lacing and lace material; the laces stayed firmly locked, and are really easy to slip on and off after a run. 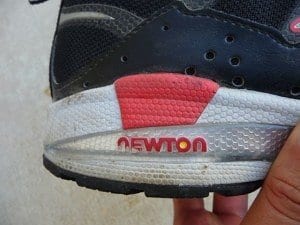 It’s this attention to small detail that assures me of the fact that if Newton wanted to build a completely awesome trail shoe, they would. The Terra Momentus is a great selection for the runner who needs that combination of stability and guidance for pronation correction, and wants to run a wide variety of terrains. The freedom from constraint is nice for some – you can step out the door and just let your feet guide you. While the platform isn’t quite for me, heavier built runners will really appreciate the support that it gives.