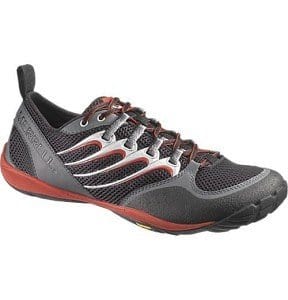 Whether you believe that Barefoot running is bunk or not, it appears that many of the major manufacturers believe that it is here to stay. The “less is more” philosophy has been coming on strong for quite some time now, and Merrell is one of several companies to embrace the trend by putting out several options for barefoot running – both road and trail. Ideally, in order to fully embrace this movement, you would run barefoot. But since glass, nails, old pop cans, and other detritus seem to be ever more abundant, it pays to have some protection for your foot.

Merrell introduced several shoes in a barefoot collection – they range the gamut from trail to casual. While we are focusing on the trail shoe, it’s worthwhile to note because Merrell used the same model for each shoe. While this specific shoe was marketed for trail usage, the main difference is the outsole – predictably, Merrell used Vibram TC-1 for the outsole, and it works much the same as you expect Vibram to work. It’s reliable, fairly grippy, and doesn’t get in the way. For this trail model, they also included a flexible footplate, which we’ll get to later. For the upper, Merrell chose a synthetic material blend that felt very, very rough to the touch. Surprisingly, the interior of the upper is extremely smooth, and quite comfortable. This is very important for long runs, as nearly all “Barefoot” shoes are designed to be worn without socks. Lastly, Merrell included an Aegis anti-microbial footbed to combat smell.

To begin with, I preferred this shoe over the design of it’s major competitor for the simple reason that I can’t stand rubber between my toes. Call me crazy, but I’ve met quite a few people who can’t even look at a pair of Vibram Five Fingers without shuddering. I’m right there with them, and really enjoyed the feel of being able to have a comparable shoe without having to shove each toe into a separate compartment. As previously mentioned, due to the nature of trail running, Merrell placed a flexible plastic plate into the forefoot of each shoe. While this is in theory a great idea, in practice it wasn’t noticeable. Barefoot running requires a change in technique (if you’re reading this review, you’ve probably heard much about the evils of the heel strike – I won’t rehash it here) to avoid injury, and it’s more the change in technique that prevents foot bruising than a thin plate of plastic. Admittedly, I didn’t step on any nails or sharp objects, and perhaps that is the intent.

Next, despite the rough nature of the exterior fabric, the interior of the shoe was very comfortable when laced up. Merrell does tend to fit my foot well, with a generous toe box and narrow heel dominating almost their entire collection. I was able to take trail runs of up to an hour and not develop blisters. Also nice was the fact that there is 0mm drop from heel to toe in this shoe – typical running shoes have a hefty drop which further reinforces the heel strike form. The only odd portion of the shoe is the additional rubber lugs added just underneath the front portion of your toes. As the stock photos don’t illustrate them well, I took my own photo – these lugs served very well while climbing, but feel fairly imbalanced while running on hard surfaces, such as pavement. 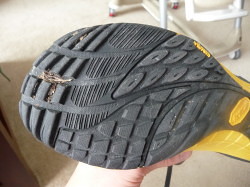 Please keep in mind that while we very much liked the Trail Glove, we only tested this shoe after a build up of several months worth of barefoot training. Running technique doesn’t develop overnight, and while a change in form for some can help to prevent injuries, in others it can create them. On a few of my first testing runs in this shoe, I developed severe calf cramping despite the build up in training. A slight alteration to my form was necessary to run comfortably in this shoe. This should not detract from the fact that the shoe is very well designed, and functioned well; you shouldn’t just expect to take these right out of the box with no prep time and expect a comfortable run. Check these and the whole barefoot line out at www.merrell.com.