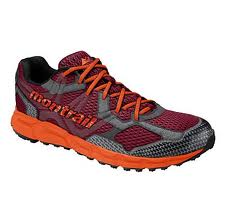 Montrail offers up its latest in outdoor excursion footwear with the Men’s Bajada Outdry. It’s billed as a neutral cushioned shoe with additional traction in order to perform off road. Outdry was added to the shoe in order to improve waterproofing and breathability. Simple yet effective, which is the way most Montrail products perform.

In looking at them in the box, my initial impressions were that this would run like pretty much any other trail offering from Montrail. The shoe seemed balanced toward the heel strike, slightly bulky, and has an almost miniature lug pattern on the bottom. The makers at Montrail (with the Bajada Outdry) have apparently decided that large, aggressive looking lugs are to be replaced with numerous small diamond shaped lugs. They claim improved traction on all surfaces, but I was a bit skeptical at first. I do appreciate that the upper has the feel of a long distance trainer, supple yet comfortable. The Heel cup felt soft in my hands, and the tongue felt just a tad overstuffed. 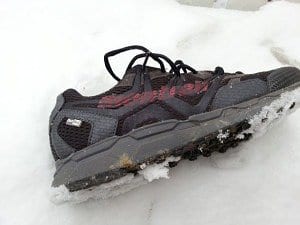 The mesh upper keeps you surprisingly warm in winter conditions.

In slipping them on for a first walk around, I thought it was immediately obvious that the sizes ran a bit on the small side. They felt restrictive, yet oddly cushioned – it was almost as if my foot was on the inside of a plaster cast. The heel toe transition was slightly awkward, feeling as if it was too stiff for it’s own good. I wasn’t actually looking forward to running in them all that much, and was disappointed, as I had always enjoyed my testing experiences in Montrail; indeed, one of last year’s offerings was still in my shoe rotation for winter excursions. The Bajada outdry arrived mid winter, so my testing excursions took me from dry, cold environments with minimal snow through wet and snowy, frozen and snowy, and muddy environments. All during my testing, the phrase “never judge a book by it’s cover” rang through my head. It’s not often that my initial impressions let me down, but in this case, they had. 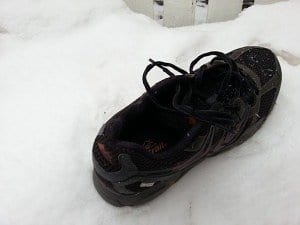 The heel cup and inner liner feel a bit bulky, and look it, at first blush.

My first excursion in the Bajada Outdry was sunny, approximately 40 degrees, and only a day after a fairly heavy snowfall hit Denver. The snow had turned everything six different shades of gray, and the trails were slick with mud and ice. A perfect environment for not only testing the outsole capability of the Bajada, but also their ability to stay dry in wet conditions. I was immediately impressed by the way the shoe conformed to my foot minutes into the first run. I did have to stop and retighten the laces, but I felt as if my foot settled into the midsole fairly quickly in a good way. Also, the stiffness I felt when walking around the house initially seemed to transition to a more springy feeling – instead of resistance, it felt like it seemed to match my stride, and felt good on multiple types of terrain. I didn’t like how it felt on concrete, however. I have to run a half-mile to my nearest trail system, and on concrete, the Bajada just felt fairly clunky. This all but disappeared as soon as I set foot on a trail surface.

Being as how I was keen to see how the traction worked (I had my own suppositions, but since most of this article is about how I proved myself wrong, I’ll just go ahead and refrain from sharing), I immediately headed to a fork in the trail which would take me to a section of slick rock. The issue with getting there was that I had to go through a low section in the trail with extremely sticky, muddy conditions. I will say upfront that throughout the mud pit, my feet did stay dry. Points are definitely awarded to Montrail for this. However, I quickly became aware of the biggest downfall of miniature tread patterns such as these – they hold mud like Velcro holds spacesuits together. They rapidly became bogged down, forcing me to stop and scrape them clean on some nearby rocks. Larger lug patterns may feel slightly imbalanced, but I do have more luck shedding mud and other debris from them. This was my only real complaint about the shoe – I’d hate to get bogged down in the middle of a trail event and have to scrape my shoe off since there was no hope on the mud coming off on it’s own. I will say, though, that they weighed less when bogged down than other trail shoe offerings I’ve tested because the lug pattern simply isn’t very deep. 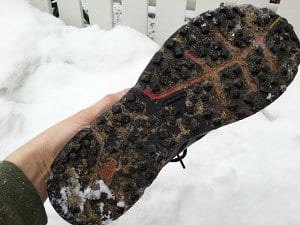 Here’s a close up look at those lugs – they almost follow the pattern of a turf cleat.

With clean (as clean as I could manage) shoes, I headed over to a section of trail with several sections of exposed slick rock and scree. This was where I thought the lug pattern on the bottom really shone through. I really, really enjoyed the how grippy these lugs were on the slick rock, and felt very confident in my footing. Nothing ruins a run quite like not feeling sure footed on technical sections – I can confidently say you will not have this issue with Montrail’s patented “Gryptonite” outsole. Also, the forefoot only trail shield was nice for uneven section and scree sections. Even the most sure footed trail runners get fatigued every now and then, and the trail shield was great for keeping the balls of my feet from bruising on sharp rocks. The trail shield is what makes for the “clunky” feeling when on concrete. This isn’t a black mark on the shoe’s design; it’s merely a statement of intent.

Throughout numerous test runs, the Bajada became more and more comfortable to the point where I personally feel the sizing is spot on; runners will feel restricted at first, but will soon find the shoe adapting to their personal foot platform. A note on the construction of the shoe, however – the shoe is listed as a neutral, cushioned shoe, and it is this; but it is this only. There is no pronation control, but this does not guarantee, however, that the shoe is automatically suited towards a mid foot strike. The shoe is definitely suited for the heel strike, and I wouldn’t recommend it if you are a mid foot striking runner. The 10mm drop in the shoe is enough so that mid foot striking feels vaguely uncomfortable – on longer runs, it feels downright awkward. People who strike with their heels will like the roll of the shoe on trail, and will likely relax into the fit throughout longer trail excursions. 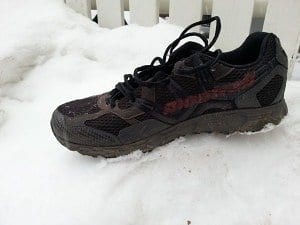 Cold conditions were not a problem. Let’s see what summer brings around for the Bajada Outdry.

I only was able to test the shoe in cold conditions, and in all of my test runs, the shoe kept my feet dry. I appreciated this, as cold and wet conditions can lead to various “hot spots” and blistering if not attended to. I will be curious to see how the shoe feels in hot weather runs, as it was more than a match for snowy conditions.

For more info on the Bajada Outdry and other Montrail footwear, visit www.columbia.com.