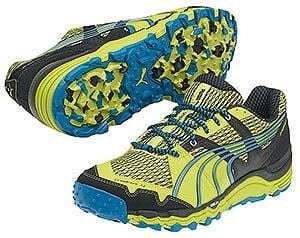 Make puma tracks – on the trail.

Puma’s long been known for everything sports related – indeed, their slogan this year is to live the “sportslifestyle”. That’s all one word on purpose. It was only a matter of time, therefore, until Puma decided they needed to take their show on the road… or trail, rather.

As trail running becomes more and more mainstream, more and more companies will attempt to put shoes out there to accommodate the growing number of eager participants. I love trail running – there’s something so freeing about gliding through miles of single track over rolling hills and rocky slopes. Puma’s aptly named “Trail Fox” helps you do just that, glide over all the terrain. Although Puma hasn’t been known to be terribly active in the trail running scene to this point, it’s clear that they are well acquainted with what goes into a trail shoe. I’ll take you through some initial impressions of the shoe, followed by my take on how it actually held up on the trail, and then we’ll talk some nitty gritty. 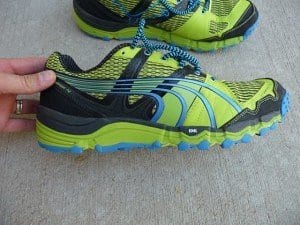 Right out of the box, my impressions of the Trail Fox were a bit mixed. While the coloring, design, and styling were all glitzy, I wasn’t convinced that (at first glance) these shoes were the real deal. The heft felt a bit off, for starters – typically trail shoes carry a bit more weight than their road suited brethren, and feel just a bit stiff. There are exceptions to this, of course, but by and large you would expect a certain measure of protection from trail shoe. The shoe feels a bit stretchy and overly flexible; it was as if they forgot to put the shank in the center of the shoe. The lacing felt a bit off in the fact that the rounded, overstuffed lacing was inadequate for the demands of trail running. All in all – it seemed a bit soft. 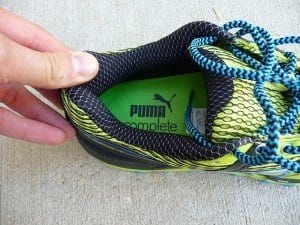 A soft, plush heel cup and rounded laces. Certainly a bit of a deviation here…

The heel and the tongue were no exception to this. As opposed to a typical anchoring heel cup – solid, slightly high, with a stiff cuff to hold your heel firmly in place regardless of what terrain you run into (no pun intended), the heel is soft, plush, and fairly flexible. It was pretty easy to twist and turn it in my hand, even collapse it a bit in on itself. As for the tongue, it’s plush, thick, and felt suited more for a neutral cushioned long distance trainer than any sort of trail shoe. I literally had to flip the box back over and check if this was a trail shoe. While the outsole seemed geared for trail activities, the rest of the shoe was fairly perplexing. 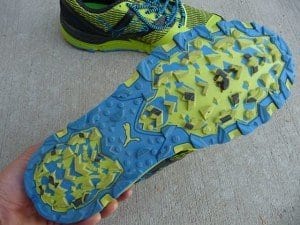 The outsole – grippy, with well spaced lugs for going on and off the road.

It wasn’t until I slipped the shoe on that I began to understand the bigger picture here. After walking around the house and down the block for a bit, I began to understand the overall construction of the shoe. While being soft and pliable, there was also an element of protection that belied my initial impressions. While listed as a trail shoe, it was designed much more to be an all terrain shoe. The traction was aggressive without being overly so, the protection was slightly more than a road shoe,  and while there was certainly cushioning underfoot, there was still a sense of the ground underfoot that many trail shoes are too bulky and stiff to have.

The big question, though, is how well does the trail fox actually perform? I tested the trail fox on a variety of surfaces rather than just head straight out to a trail, mostly because of my initial impressions of the shoe. First up I eased into smooth, gravel trails, with only minimal climbing involved. On mostly flat terrain, with only minimum challenge, the trail fox felt fairly smooth. There was just enough cushion in the shoe to block out the feel of the smaller, jagged rocks while still providing a nimble feel for the road. The shoe felt quick and stable in these conditions.

Going from gravel roads to trails was another matter, though. Due to the soft nature of the shoe, I didn’t feel as well balanced in tougher conditions. First off, I tried a few sections of narrow single-track trails. While being very rutted and gnarly, these trails are relatively rock free, and provide a consistent surface throughout 3 or so miles of windy turns and moderately difficult climbs. While the tread on the bottom of the shoe was grippy enough to tackle varying dirt conditions with success, the narrow single track at times didn’t feel solid due to the flexing of the midsole. This only occurred when the trail narrowed severely, but it was still a bit of a let down. I would have preferred a bit more torsional stability here.

As for technical rocky trails, the trail fox was just a bit outmatched. It tended to lose traction on sections that contained mixed surfaces, and was unstable on slick rock – both climbing and descending. While feeling very nimble on gravel roads and stable surfaces, I always felt on the verge of losing my footing on any technical section I tackled. 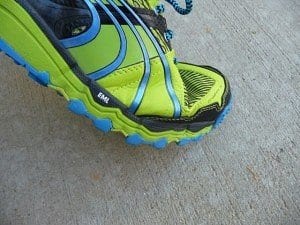 The shank ends a bit early in the shoe, making for a soft, easy flex as well.

I feel that overall, Puma’s foray into trail shoes is a little underrepresented with the Trail Fox and true to everything Puma, will be vastly improved upon with runner feedback. I was impressed with how nimble the shoe felt despite all of the cushioning, and like the shoe when moving from gravel to road and back. This would be a great shoe for wide, rolling country trails which switch from dirt to gravel and occasionally take on a short climb or two. I feel it’s more suited to the label of all terrain trainer than a serious trail shoe. As trail running is still in it’s infancy as a mainstream sport, many companies will test the waters, and improve as a result of it. I feel Puma is no exception.