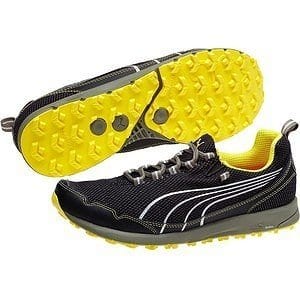 Looking to stay a little lighter on your feet while hitting the trails this season?  The Puma FAAS 250 is an excellent option!  I’ve been testing out the Puma FAAS 250 over time on a number of different terrains. The different types of terrain I tested the FAAS 250 out on include fire roads, single track, technical rocky trails, and grassy/dirt trails. 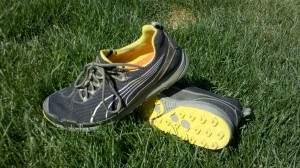 When I first took the Puma FAAS 250 for a run, I decided to go big, or big at least for me!  I wore the shoes around town for about an hour when the shoes first arrived at my door and the next day I decided to test these shoes out in my first 50k trail race, the Greenland 50k.  Throughout the race, I found the shoes to feel light on my feet, which is important in a longer distance run/race.  The actual weight is 9.1 oz. which is fairly light for a trail running shoe.  The other feature I noticed was the 8mm drop.  The height of the heel is 15mm and the toe sits at 7mm, allowing for a 8mm difference or drop.  The standard drop you will see on many traditional trail running shoes is 11-13mm.  So this doesn’t put you into the barefoot category, but it does get you close to the minimalist category.  What does this all mean?  Barefoot and minimalist shoes allow your feet and legs to do a little more work, creating a more natural style of running. 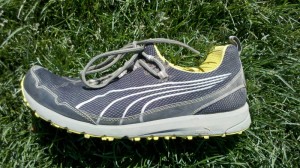 The upper on the Puma FAAS 250 was super comfortable and secure.  When I first noticed this shoe did not have a separate tongue, I was a little skeptical.  Most shoes that don’t have a separate tongue often don’t fit all that well in my opinion.  After trying the shoe on, it felt like a slipper without the slip.  Over 90% of this upper is a breathable mesh to keep your feet nice and cool.  Sometimes when on airy mesh trail running shoes, you get a lot of stones and dirt into the shoe.  I can testify that this did not happen on any of my runs, even my 50k.  For toe protection, the FAAS 250 doesn’t have a beefy rubber toe bumper, but it has a synthetic leather that goes around the edge of the toe box that provided plenty of protection. 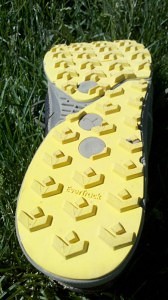 For traction, I found the Puma FAAS 250 to offer great traction for a lightweight shoe.  As far as lugs go, I felt that these lugs were big enough for most technical trail runs, but they didn’t have the super big lugs like you would see on a pair of Inov-8’s.  The lug formation is multidirectional which allows for good traction on both uphill and downhill terrain which is a must to look for in a trail running shoe. The midsole of the Puma FAAS 250 is made of a blown EVA, so you get a plush cushioned ride. 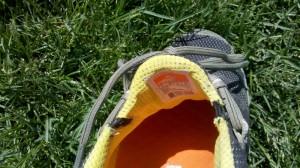 With a price tag of $85 buckeroos, I highly recommend this shoe for those runners considering minimalist trail running and lighter-weight running shoes.