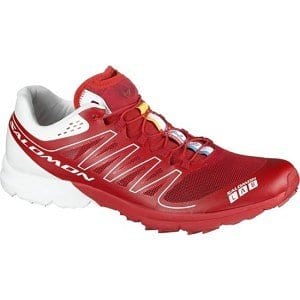 For the trail runner that takes their trail running serious, and their racing even more serious, Salomon has recently introduced the Salomon S Lab Sense Trail running shoe.  This shoe weighs in at 8.5 oz. while still offering the some of the stability and protection you come to expect from a trail running shoe, but with race focus.  Salomon is particularly proud of this shoe as they worked with their famed trail runner Kilian Jornet to design this shoe from the inside out.  With a price point of $200 for a pair of trail running shoes, Salomon understands these shoes won’t be flying off the shelves, but they see this as an opportunity to provide an offering for that elite trail runner that wants to be at the top of the podium.  They also see this as an opportunity to model future shoes after that reaches more of a broad audience. 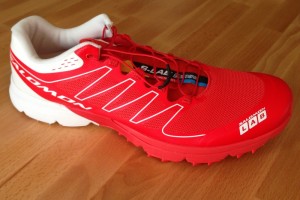 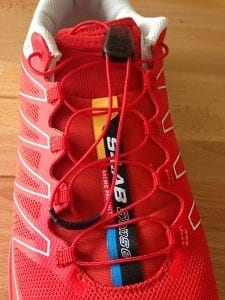 The upper of the Salomon S Lab Sense trail running shoe is made with a combination of tight weaved mesh for maximum breathability and a synthetic material to allow for shoe structure and integrity.  In the heel of the upper, you get a similar amount of padding as you would in a traditional trail running shoe which allows the heel to stay secure and comfortable.  Salomon uses its signature lacing system for the S Lab Sense trail running shoe which is a thinner than normal lace that tightens at the top of the shoe with their patented tightning and lacing system.  While I am comfortable with traditional lacing systems, I find the Salomon style of lacing is top notch and you get an incredibly secure fit when all laced up.  The tongue of the Salomon S Lab Sense connects to the midsole which helps keep out rocks, twigs, and other interferences you don’t want to deal with while racing.  This interconnected tongue also hugs the foot which adds to that race shoe fit. 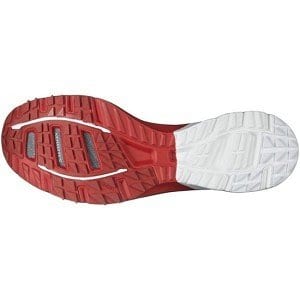 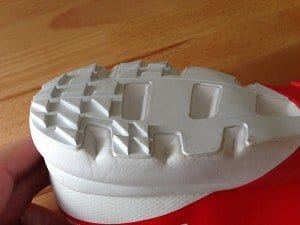 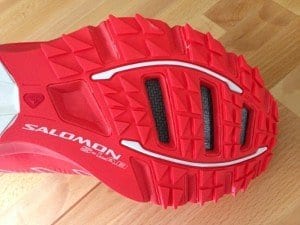 Salomon was very careful when designing the outsole of the S Lab Sense trail running shoe.  This is often where a shoe gains or looses a lot of its weight.  There are noticeable differences where Salomon left out parts of the midsole and outsole to save weight without having to sacrifice of ton of traction.  The outsole is not one that will last for 500 miles as they use smaller lugs and less rubber overall, so I would expect to get 200-250 miles out of this shoe depending on your weight and the terrain your running.  For most of us, this means this is not your training shoe as your shoe budget would have to go up just a tad.

The fit of the salomon S Lab Sense is tight and snug.  Think of a road racing flat in how tight those shoes feel and transfer that same fit into a trail running racing flat.  This also means the toebox of the S Lab Sense is very snug.

Note: The Salomon S Lab Sense goes up to a men’s size 12.