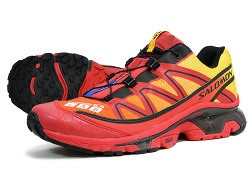 Salomon trail shoes have the ability to polarize debates on running boards and blogs across the country. Certainly a giant in the outdoor sports industry, Salomon has been around for some time. A company doesn’t do this without doing a few things right along the way. So why all the hubbub? Take a pair of the S-3’s out, and you’ll find out why. As the name suggests, Salomon followed the design pattern for the XT series in this shoe. Unlike numerous other companies out there who threw away all design patterns in search of a better shoe (read – the barefoot movement), Salomon took a look at one of their flagship shoes and said “how do we make our core design better?” One of the luxuries of being an enormous company is the ability to attract pros to your label. Salomon took the XT wings to their pro team, let them beat the tar of them, and then sought feedback. And the feedback wasn’t all that simple. Make these lighter. Make them feel quicker. Oh, and by the way – don’t sacrifice performance. 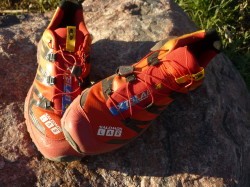 Gotta love those 5 am runs…

Task 1 – make these lighter. And Salomon did just that. At a size 10.5, the S-3’s are just about 10% lighter than the XT wings 2 (GTX). They did this in two different areas of the shoe – first in the outsole, and second in the midsole material. The outsole is made up of a new “Contragrip” material and the midsole features triple density EVA in a lighter compound than it’s predecessor. But how does it perform? It certainly is lighter. Right out of the box, this felt more like a road shoe than a trail shoe. Almost completely gone was the stiff shanked feel of the wings – you could tell that it was going to be a different experience all together. For my first run, I elected to take them on 7 miles of extremely rocky, craggy trails. After 7 miles, I did miss that underfoot protection. My foot felt fairly bruised after a few small missteps, especially on the ball of my big toe. But what I noticed was a remarkable feel for the trail. So it’s clear that while Salomon chose to cut weight by removing some underfoot protection, they didn’t trade performance for it. So while the cushiony feeling that we’re used to from the wings is still there, run in them like a barefoot shoe, because the protection just isn’t. 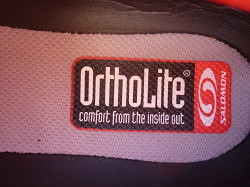 You think that the OrthoLite insole has anything to do with the cushy feel?

Task 2 – make them feel quicker. Salomon achieved this in the construction of the upper, and how it fit with the lighter, more flexible midsole/outsole combination. A quick look at the photo of the upper shows that Salomon used an almost completely different fabric/rubber combination on the upper to create a more responsive feel. Instead of feeling like your foot was locked into place, this felt flexible, almost like the Nike Free does. It was great for the more even, smooth sections of the trail where you could really pick up some speed, but I didn’t like it for the technical, craggy sections. It felt like my foot seemed to slip around a bit in them, and when I needed the shoe to lock down the most, it would twist. I actually developed a blister from for this reason on my first run, but each successive run was fine after that.

I would be amiss if I didn’t talk about a few features that are similar to the original shoe. For one, the most talked about feature on this shoe – the lacing system. Salomon has made this the standout feature on all of their line up, and I for one am a huge fan. What’s nice about it is that they’ve now perfected it, so that it works quickly, efficiently and keeps your foot locked down. In the first iterations of the system pinch zones and uneven lacing would develop, which was the primary complaint. No more – the draw on the system is smooth, the cinch lock at the top has a secure grip, and Salomon even includes a small pocket in the tongue of the shoe to store the excess lace. Draw them as tight as you want them, and then take a few steps for proof – the eyelets are easy glide as well, so the tension will redistribute itself throughout the shoe. As I said before, I like the way it feels. Some, however, point to the fact that they like a tighter “cuff” around the heel, and a loose toe box. I’ve heard other people say the opposite. To each their own, but if you like hassle free lacing systems that actually work, look no further. A word of caution, though – don’t break a lace on a run. You’d be screwed. 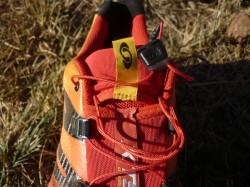 Don’t let the picture of how thin the laces are fool you – they actually don’t pinch at all.

To Salomon’s credit, they kept all the usual bells and whistles that typically accompany a trail shoe. The rubber toe bumper up front provides adequate protection without being too heavy (it’s also very flexible), and the upper is actually lined at the base with another rubber strip as a type of mud guard. I didn’t get a chance to test that out – Colorado’s pretty dry at this time of year – but I did like the way the upper of the shoe breathed. Even with the rubber strip at the bottom, my feet stayed fairly dry. Also included is a fairly aggressive outsole (mentioned above) that does the job – but only just. In the quest to cut weight, I feel this is where Salomon may have erred. The outsole tends to wear quickly, and it loses traction on slick rock and scree. One would normally think that these two issues are in complete opposition to one another. The formula is as follows: hard and long lasting = poor traction; soft and short lived = great traction. For some reason, Salomon got the worst of both worlds here, and the result is rather disappointing on an otherwise great shoe. Don’t get me wrong – I’m going to run them until the tread wears through – they are just too comfortable not to. 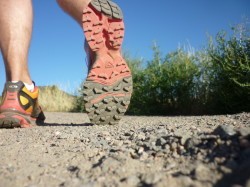 It may look aggressive, but I saw serious wear after only one run.

I checked around the web, and you can find these at a few discount sites around the web for approximately a bill. They retailed at half again as much, and unless you were a die hard Salomon fan, I’d say that was a bit overpriced. But for the bill? I’d buy them all day long, short lived rubber and all. Plus, the bonus feature is that the color scheme looks pretty kick ass as well. Speed on over to Salomon and check them out – www.salomonrunning.com/us/.