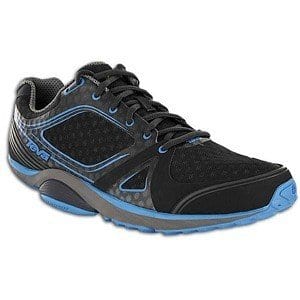 Teva, long known as a big player in the active industry, is putting out a bold line up of trail shoes for both men and women. Always a company to blaze their own path, Teva put a few new twists on the trail shoe with their lastest offering, the Tevasphere Speed. I was surprised to see a trail running offering from Teva in this summer’s lineup. I’ve long been familiar with their sandals. Their reputation is pretty legendary, and goes hand in hand with the advent of summer every year; the ability to go through anything from water to long hikes makes Teva’s sandals a must have in Colorado. 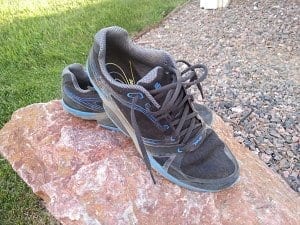 The Tevasphere Speed after quite a few dusty CO trail runs.

Right out of the box, it was easy to see that the Tevaspere Speed was different from other trail shoes. To begin with, the outsole is constructed unlike any shoe on the market right now. From the heel to the toe, Teva made changes from the standard outsole of a trail running shoe. The heel (the feature from which the shoe derives it’s name) has the shape of half a tennis ball; it literally looks like half of a sphere. Two large “pods” flanking either side of the shoe immediately follow this; one is to the exterior and one is slightly forward to the interior. The design draws the eye, and is unmistakable. Teva did it’s best to turn the design into something cool and unique, and the design is almost esthetically pleasing; I believe some will find the unique look cool, while others will be just a little put off by it. The other features of the shoe are similar to other trail/offroad shoes – there is a rubber toe bumper, grippy outsole, and a heavy duty lug pattern. 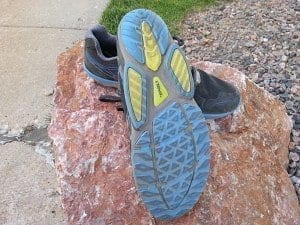 The construction of the outsole, from rounded heel down to the external bars.

Teva offers the Tevasphere speed as part of their trail lineup, even though the shoe was actually designed as a shoe that will perform best in obstacle course races. Unfortunately, there were no races held like this during our testing phase; as soon as there is one, I’ll be sure to run in the Tevasphere speed and post an update. It’s an interesting angle to take, and I’m curious to see how that turns out for Teva. Over a period of three weeks, I took the Tevasphere speed over a variety of terrains and surfaces for distances of 5k to 6 miles. While my trail runs were all extremely dry, I do have a test run in which I cross a stream several times; while this is actually much more of a trickle, there is a section of steep rocks for a technical ascent phase with water. 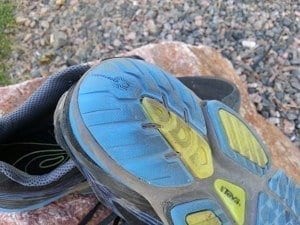 The heel from which the shoe gets it’s name – it really is almost half a sphere.

Since the most salient feature of the shoe is the outsole, I’ll begin with how that performed in all of my testing phases. The construction of the outsole both surprised me and intrigued me during my testing runs. I was expecting to feel oddly unstable on the spherical heel, yet clunky through the midsole due to the large pods on either side of the midfoot. I was actually completely wrong in my expectations; the Tevasphere speed was very well balanced underfoot, and didn’t feel “iffy” no matter what stride I tried to use. I  went uphill and downhill with both long and short strides, heel strike and forefoot strike, at a mixture of paces. The more I tried to sort of force the shoe to become unstable, the more it, well, became stable. While I never did adjust to the look of the outsole, I will admit it doesn’t feel anything like it looks. I will say that I was a bit disappointed in the grip of the shoe. While climbing on dry, dusty trails and slick rock, the outsole was everything Teva promised and more. When fording the stream and climbing up it, the outsole became the opposite. Under very slick conditions, I felt like the outsole was almost non-existent. A bonus here, though, is that the shoe dried out extremely quickly; I got them wet at the beginning of a six mile run, and they were drive almost before mile two began. 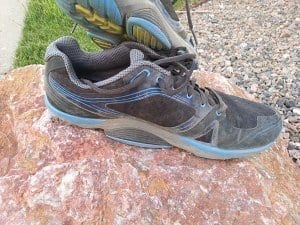 The outsole dries very well, but also let in quite a bit of dust on long runs.

As for the fit of the shoe, expect the shoe to run approximately a half size too big. I test only size 10.5, and can immediately tell when a shoe runs large right out of the box. This was the case for the Tevasphere; many features of the shoe (especially the fit of the midsole/upper) would feel great if the sizing was spot on for me. If looking to purchase the Tevasphere, be sure to try on a half size smaller than your normal active shoe size. As such, the mesh upper felt a bit loose on me, and therefore slightly sloppy on the run. Due to the low cuts outside of the immediate heel cup and the larger size, I kept getting trail debris in the shoe; during the six mile run, I had to stop and empty the shoe because it became painful to run in. Also, the strips of heavier material (holding the mesh together) dug into my forefoot on longer runs, causing slight redness – a sign of pending blisters. Once again, I feel this would all go away with the proper fit, so be sure to try them on at your local running store. 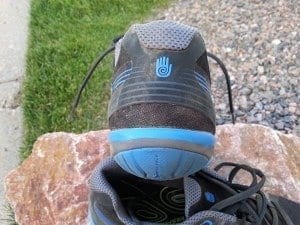 In conclusion, I feel the Tevasphere Speed is a great choice for light, short trail runs and light duty trail hiking/jogging – even walking. The design asthetic is unique, and the well-ventilated design keeps your feet temperate on even the hottest of days. Beginners will appreciate that the feel of the shoe is similar regardless of running technique – the shoe feels balanced for both heel strikers and forefoot strikers alike. When purchased in the correct size, I feel the fit of the shoe will be very conducive to the explosive movements needed in an obstacle course race; so if you’re planning to do something like a “warrior dash” Teva has the shoe for you. Head on over to www.teva.com to check them out.