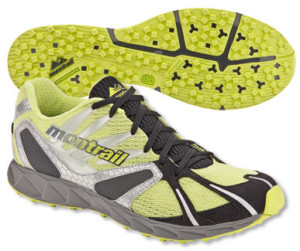 Coming out with Montrail’s lightest trail running shoe for Spring 2011, we introduce to you the Rogue Racer.  The Montrail Rogue Racer is a trail running shoe specifically designed for those that are looking to blaze the trails at lightning fast speeds or looking for a lighter weight trail shoe. 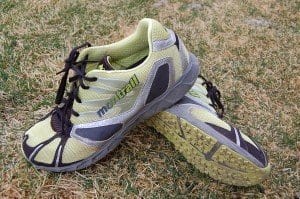 With the popularity of less is more, it was only natural for Montrail to come out with the Rogue Racer. This shoe weighs in at 8.8 oz. for men and 7.4 oz. for women, which is super light for a road or trail running shoe.  Now lightweight and reduced weight is a great thing, but please keep in mind this shoe is best designed for those intending to use it for racing or speed training.  I’ve been pleased with the Rogue Racers performance on my trail speed workouts, but for my everyday trail running, I like a shoe that offers a little more for cushioning and traction. 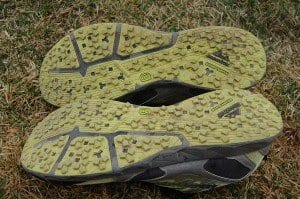 One thing that I noticed in the Montrail Rogue Racer is that it lacks the burly lugs that you often see in most trail running shoes.  By reducing lug size, Montrail is able to shave weight off the Rogue Racer, but it also diminishes the traction performance on more technical trails.  I found that while running on loose rock and rocky terrain, I did not have the traction I come to expect out of a trail running shoe.  This became most apparent while running near Red Rocks outside of Denver, CO and I was on a dry rock/sand mixture downhill.  I wanted to blaze down the hill, but I felt out of control with the lack of traction.  This continued with most dry trails I ran.  If the trail has a little more moisture, the shoe might hold a little better.  While running gravel paths in and around town, I found the Rogue Racer supplied ample traction. So, depending on the surfaces you are running, the traction could or could not work for you.  My personal suggestion to Montrail would be to increase the lug size by about 2mm. 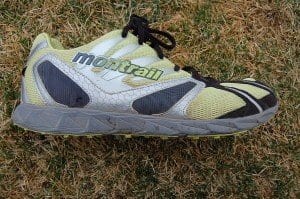 The Rogue Racer is constructed with a double layer mesh to allow for added durability, breathability, and the double layer construction helps keep out dirt and debris.  This shoe has a TPU shank that spans from the heel to the midsole within the midsole allowing for added stability and reducing the impact of rocks and sharper objects on your feet.  Unlike other trail running shoes, the Montrail Rogue Racer doesn’t have much for toe protection when it comes to stubbing your feet on rocks and roots. I personally would like to see more toe protection, but if you aren’t running trails where stubbing your toe is a problem, this isn’t a big deal, and it also helps reduce weight.

My personal thought is that the Montrail Rogue Racer feels almost like a road running race shoe as much of what makes a trail shoe has been minimized or stripped off the shoe.  I feel this shoe is best designed for the runner who is running gravel paths or trails that aren’t too technical.  The Montrail Rogue Racer retails for $110.  For more information about the Rogue Racer, please visit https://www.columbia.com/montrail/