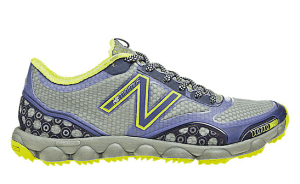 This new iteration of the New Balance Minimus trail running line, the Minimum 1010 Trail,  nailed lightweight, superior traction, comfort and protection. When taking new minimalist running shoes out for the first time, especially on trail, I prepare myself to return with my feet feeling a little bit beat up. This was not the case with the Minimus 1010 Trail.

When I saw that New Balance designed a shoe very similar to the Minimus 10 Trail, but added ROCK STOP® protection, I couldn’t wait to check them out. I loved the Minimus 10, but just couldn’t take them on the rocky trails in the Front Range of Colorado. The Minimus 1010 Trail did not disappoint. The ROCK STOP® was definitely the standout feature on these shoes. The marketing video on the New Balance website explains that the ROCK STOP®, which is high durometer EVA foam between the outsole and midsole, distributes the impact of a sharp rock or object across the layer to protect the foot from feeling the impact, bruising, or blistering. It was spot on. I actually described it exactly the way the video does before I even saw the video. Having planted my forefoot on plenty of sharp objects in the past, I can confidently say that ROCK STOP® does its job extremely well. Even with a minimalist sole, I felt less impact from rocks than in trail runners with very thick, durable, heavily-lugged soles. The ROCK STOP® didn’t seem to impede the flex of the shoe all either. 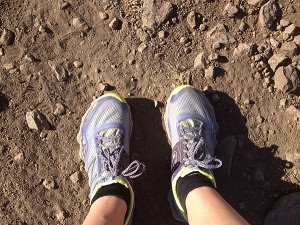 The Vibram outsole features pods similar to other NB Minimus styles, but these aren’t as smooth. They have what I would describe as ridges or almost a serrated style mini-lugg. I did find that these added to grip on smooth rock surfaces or on sections with a small pebbles. I didn’t experience any slipping no matter what surface I came across. I also noticed that the Vibram that wrapped over the front of the toe-box came in handy and added significant protection as I slammed my toes into a rock or two when I didn’t pick my knees up quite high enough. 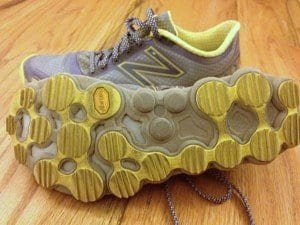 The Vibram itself (yellow in photo) is extremely durable, but the REVlite foam material (gray in photo)  that makes up the midsole and fills in the gaps between the Vibram pods was showing signs of wear after a handful of mid-distance runs. As the pictures shows, the foam was starting to tear in the toe area after wearing these for 30-40 miles of trail running. 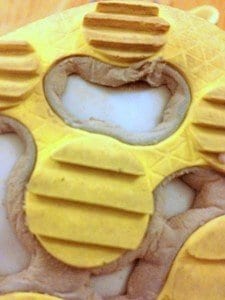 Aside from the durability concerns on rugged terrain, I was really pleased with the responsiveness of the REVlite midsole especially considering how lightweight it was. Even with how minimalist the Minimus 1010 Trail runners are they provide a touch of cushion with a firm responsive feel on foot strike.

The uppers are a synthetic mesh material with some plastic details. With an attached tongue, the Minimus 1010 Trail uppers provided a glove like fit. The inside was finished nicely and although I only tested these with socks, I could see them easily being worn without socks.

The fit was true to size in length, but they seemed tad wide and not just in the toebox, which is common for minimalist shoes to allow the toes to splay naturally. I found that I really need to tug the laces tight to get them to feel snug. Tightening the laces that much caused the attached tongue to wrinkle a bit, but the material was soft and thin enough that I didn’t notice the wrinkles after a few minutes. 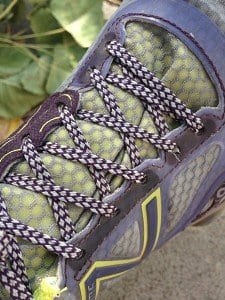 Once I got them tight, I also noticed that the laces were really really long. I didn’t just double knot them, I tied the bows into bows to keep from stepping on them while I was running. 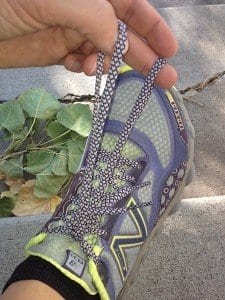 Overall, the New Balance Minimus 1010 Trail shoes are a standout for me in the minimalist trail running category. They would be an excellent choice for neutral runners looking for a minimalist trail shoe that offers outstanding protection over all distances.