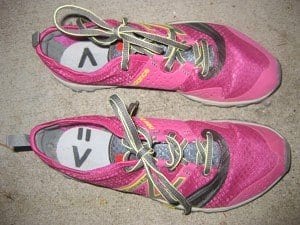 New Balance seems to have filled-out their line-up of minimalist running shoes for trail and road with 4mm and zero drop options, but to be honest, I have a really tough time telling the difference between the models other than drop and colors. The Minimus 20v2 Trail (WT20) is an ultra-lightweight, 4mm drop, Vibram soled trail specific running shoe. I own a pair of Minimus 10 Trail shoes that I have covered more than 250 miles of road and dirt in. From the description on New Balance’s website these shoes would appear to be very similar. That was not what I found. 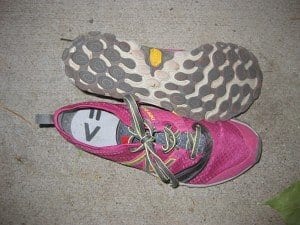 The Minimus 20v2 Trail is extremely lightweight with the women’s version weighing in at 4.6 oz. You barely notice the weight of the shoe on your foot. The upper is extremely minimalist with very little or no cushioning. The material of the upper is unlike any material I have seen in a shoe. I hesitate to call it mesh because it doesn’t really have any visible holes or perforations, but for lack of a better term and since that is what New Balance refers to it as, that is what I’ll go with. When I think of mesh, I think soft and flexible. I did not find the mesh on the uppers of the WT20 to be either. It was rigid, rough feeling, and did not break in as I wore the shoes more. Rather than flexing with my foot and wrinkling the material folded harshly or almost cracked to conform to the movement of my foot in the shoe. I cannot imagine wearing these without socks. I think the material in the upper of the WT20 would be very uncomfortable against bare skin. 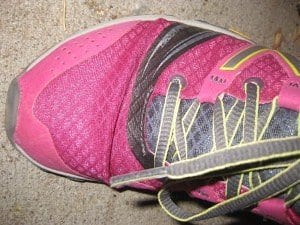 The Minimus 20v2 Trail does not have an insole which also cuts back on weight and creates a close to the ground feeling. The midsole is Acteva foam which cushions and resists compression while being 12% lighter than standard foam. I really like the feel of the midsole. I thought it had a firm, dense feeling, but was still responsive and lightweight. I think that the Acteva would stand up to a lot of rough miles before breaking down which I cannot say about all lightweight foams used in midsoles of running shoes. 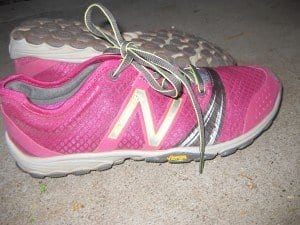 The outsole is low profile Vibram making the WT20 a versatile shoe that can be worn on trail or pavement. The Virbram sole gripped well to rocks and the low profile of the shoe added stability and reduced the chances of rolling an ankle on rocks or uneven trail surfaces. The Vibram sole is also extremely durable and I expect that it would outlast the rest of the shoe. One addition to this shoe that was not in my WT10s is an additional rock plate between the round Vibram lugs. The sole is still thin enough that you feel rocks as you’re running, but the additional rock plate, although minimal, prevents rocks from jabbing into my feet while running. A welcomed addition to this shoe. 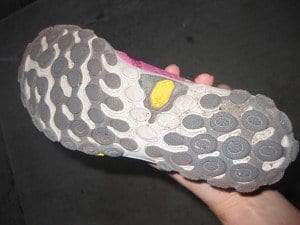 The width of the Minimus 20v2 was perfect. They fit snugly through the heel and midfoot, but had wider toe box that allowed my toes to spread naturally. The length on the other hand seemed off. They fit dramatically different than my old WT10s which were the same size. I would order at least a half size, if not a full size, smaller in the Minimus 20v2. I had about 1.5 times the width of my thumb at the front of the shoe. 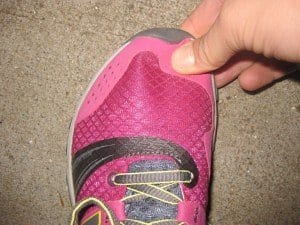 Overall, I was pleased with the outsole of the Minimus 20v2 Trail, but a bit disappointed in the fit and the material of the upper. I would take a slightly heavier shoe in exchange for a more comfortable upper. Yes, the fit was disappointing, but had I been trying them on in a store, I would have known to size down from the start.

For more info on the Minimus 20v2 Trail and other New Balance footwear, visit www.newbalnce.com.