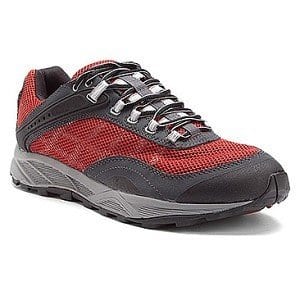 The midsole of the Patagonia Specter is made of 20% recycled EVA and is 25% lighter than standard EVA.  This helps the shoe stay a little lighter than other trail running shoes on the market, weighing in at 11.1 oz. for men’s.  Most trail running shoes for men weight in around 12-12.5 oz. To keep rocks from pushing through the EVA in the forefoot, there is a shock absorption plate that takes the brunt of the blow on more technical trails.  I found the plate to do the job about 90% of the time while running technical trails, but there were times where I found some sharp rocks and roots were able to express their dominance.

The upper on the Patagonia Specter is made of 100% recycled polyester moisture wicking mesh for breathability and synthetic leather for form and durability.  Along the inside of the mesh lining, there are fabric bands that give the upper additional structure, similar to the looks and function of an Asics running shoe.  The lacing system of the Specter allows for different foot types as there are 5 lace-holds on each of the shoe that adjust to each foot size.  This also allows the foot a little bit of movement, but not too much, creating a more comfortable ride.  The toe bumper on the Specter is a little on the small side and doesn’t offer a lot for protection, so if you stub your toes a lot while running, you might want to look elsewhere.  The tread on the Patagonia Specter is fairly standard as trail running shoes go.  It is not super burly, yet it offers a little better traction than a standard road running shoe. One suggestion that I would give to Patagonia would be to use an Ortholite footbed as the footbed in the Specter is cheaper foam footbed that breaks down faster and doesn’t perform as well as an Ortholite footbed.