For the trail runner who likes less of a heel to toe drop in a trail running shoe, the Pearl Izumi EM Trail N1 is a great option for the neutral runner.  The Pearl Izumi EM Trail N1 Trail Running Shoe is part of Pearl Izumi’s EM line which is a line that’s light on the feet yet very responsive.  I’ve tested this shoe out over the past few months in varying conditions including mud, slop, snow, ice, technical rocky trails, as well as one of my favorite run of all times running down and up the Grand Canyon which had a 4,700 ft change each way. 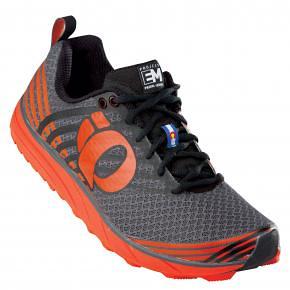 One of the first things I think about when look at the Pearl Izumi EM Trail N1 is that I didn’t really notice that I was running in these shoes.  This is generally one of the highest compliments to a running shoe as I get to focus on my run and the trail and not the shoes.  But since I am here to tell you about these shoes, I will dig into the details and tell you all about the good, bad, and mudgly of this shoe. 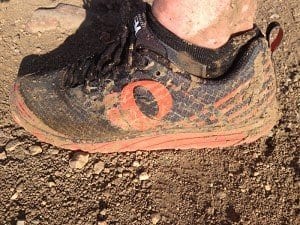 The upper in the Pearl Izumi EM Trail N1 trail running shoe is comprised of mesh with synthetic overlays to provide breathability and structure to the shoe.  The amount of material used in the upper is a little less than the average trail running shoe which shaves an little bit of weight, but the shoe has held up very well over hundreds of miles on the trails.  There is no inner liner to the upper of the shoe which allows some finer dirt particles to get into the shoe, but not enough to worry or complain about.

I have an average to a little above average width foot and I found the shoe to fit very well.  I found it to be neither too narrow nor too wide in both the toe box.  As for fit in the heel, my foot stayed in place without any rubbing or irritation.  To keep the tongue from sliding to one side or another, there are two loops on the tongue that the laces go through that keep the tongue on top of your foot and not sliding to one side or another.  The inside of the tongue has a foam insert that doesn’t allow water to absorb, so if you do any water crossings or are running throughdeep puddles, this will become one less piece on the shoe that needs to dry out. 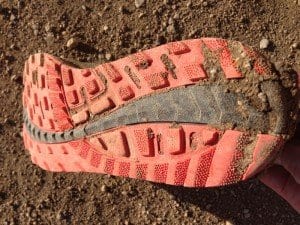 The midsole used in the Pearl Izumi EM Trail N1 Trail Running Shoe is made from a technology Pearl Izumi calls dynamic offset.  In short, the midsole is a group of connected pods comprised of lightweight EVA that flex with the foot through the stride.  These pods aren’t separated like the Nike Free or other similar shoes, but they are connected as one but act individually through the stride.  What I found during my testing was that my stride didn’t change with this shoe and as I mentioned above, I was able to focus on the trail, not my shoe.

For those running technical trails with lots of rocks, rest assured you won’t be feeling each and ever rock you run over.  I run a lot of technical trails and I never had a run where I felt like my feet were sore with the EM Trail N1’s.  One of the reasons you can’t feel the rocks is because this shoe comes with a rock plate consisting of hard plastic under the forefoot.

The outsole of the EM Trail N1 Trail Running Shoes have big enough lugs to providing great traction on dry technical trails and also helps navigate through muddy and sloppy trails.  One thing I noticed on the outsole of this shoe is that there are 4 lugs in the midfoot of the shoes outsole that don’t use outsole rubber, but they are part of the EVA layer that is used in the midsole.  This has not particularly affected my running, but it is noticable that these 4 lugs ware down faster than the other rubber lugs.

My overall impression of the Pearl Izumi EM Trail N1 Trail Running shoe is extremely favorable.  This shoe is definitely become a go to trail running shoe for me and I highly suggested taking a look at it whether your looking at regular or minimalist style trail running shoes.