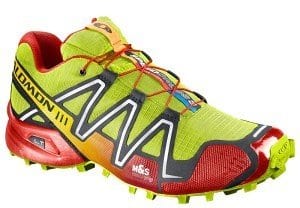 For the trail runner that wants superior traction while having not having to sacrifice fit and other performance factors, the Salmon Speedcross 3 is a must see.  I’ve been testing this shoe out in both shorter trails runs ranging from 3-7 miles and longer trails run upwards of 24+ miles.  The types of terrain I tested these shoes out varied tremendously.  I tested them out on dry loose dirt, mountain scree fields, lots of rocks and roots, water crossings, jeep roads, and pavement. 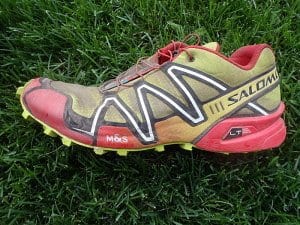 If you have seen the Salmon Speedcross 2 or 1 in the past or you are seeing this shoe for the first time, the feature that sticks out most is the aggressive lug pattern on the bottom of the shoe.  When running up steep ascents, I found the traction to be superior and I felt that I could climb just about anything but ice. On the downhills the lugs have a reverse climb pattern on the heel to allow for you to slow down when the terrain is too steep.  Speaking of downhill, I found there to be plenty of cushion to absorb the impact on the downhills.  Often times, an aggressive trail running shoe doesn’t always have the greatest cushion in the heel, but not the case in this shoe. 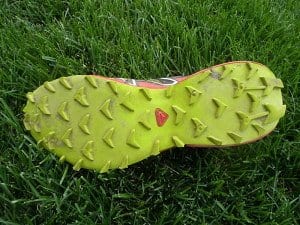 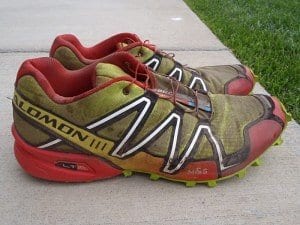 The upper of the Salomon Speedcross 3 is made of a tight weaved ripstop nylon that keeps the dirt and debris out of the shoe. I recently ran the Gore-Tex Trans Rockies Run which is a 6 day stage run that averages 20 miles of trail running each day.  Through this run, I used the Salomon Speedcross 3 for 5 of the 6 days.  I found the shoes to keep out all debris while allowing the foot to breathe plenty.  After running through rivers and a mile of water, I found the shoes to drain and dry out about average compared to other trail running shoes.  The foot bed of the shoe is made with Ortholite which absorbs water more than some other foam foot beds, but nothing too drastic.  For those that stub their feet while trail running and need a tough toe bumper, I am happy to report that this shoe has plenty of toe protection. 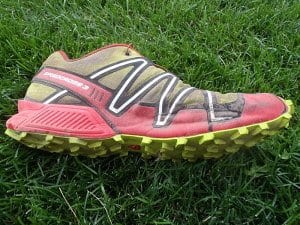 The Salomon Speedcross 3 weighs in at 10.8 oz. for a men’s size 9 and 9.3 oz. for a women’s size 7.  This does not allow the shoe to fit into the minimalist category, but on both long and short runs, I felt the shoe to fit fairly light and I wear a size 12.5.  Overall, I found the Salomon Speedcross 3 to be an amazing performer on technical trails and would highly suggest this shoe for those that take trail running serious. For more info visit salomon.com