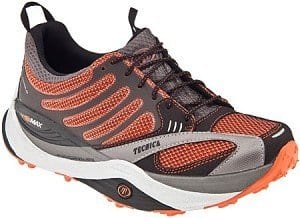 While many running shoe manufactures are taking the route of less is more, Tecnica is taking an alternative approach where bigger is supposed to be better.  The name of the shoe is Diablo Max and the concept isn’t to just make the running shoe bigger with more cushioning, but to develop a shoe that helps propel the foot and body forward. 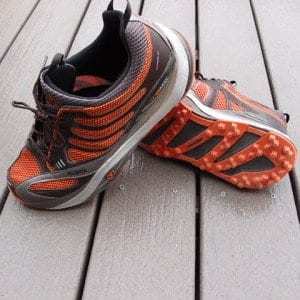 When I first saw the shoe, I wondered whether Tecnica sent me the right shoes.  The Midsole of the Tecnica Diablo Max is similar to other “fitness” shoes on the market where it is almost double the size of a normal running shoe and about 10 times midsole of a minimalist shoe. While the Diablo Max looks like a fitness shoe with a similar looking midsole, it has its’ differences.  The fitness shoes that you see by Sketchers and other shoe companies creates a level of instability where your feet and legs have to do a little more work to keep you stable.  The Diablo Max has a similar cushioning to the fitness shoes, but without the instability.  Instead, the shoe is set up to propel your foot in a forward motion when your foot strikes the ground. 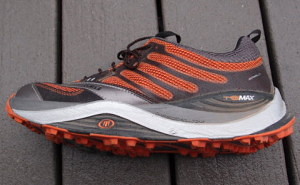 When I first took these out for a run, I instantly noticed the rocker system that propelled the foot forward.  It was extremely different from what I was used to running in, especially minimalist shoes. My first feeling was to get the shoes off my feet and get a standard pair of running shoes on my feet, but as a product tester, I knew that I had to continue on to see how the shoes perform in the long run, no pun intended.  I have taken these shoes out on technical trails with lots of rocks and roots.  In this instance, the shoe performed a little better than expected, but not as well as other trail shoes I have tested this season.  The weight of the shoes is 360 grams or about 12.7 oz. which is about 1-1.5 ounces more than other trail running shoes on the market.  So it’s not that much heavier, but mind is sometimes heavier than matter, because the look of a bulky shoe made me think that it was heavier while running. 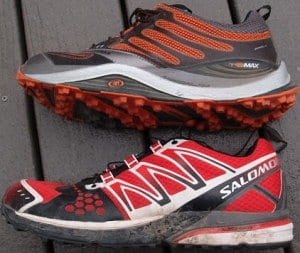 On gravel paths, I did not like the performance at all.  I felt that the shoe was pushing me forward way too much and not allowing me to get into a comfortable stride.  With the recent introduction of minimalism, I am starting to lean more towards letting my legs and feet do more work and allow the muscles to build up vs. a shoe like the Tecnica Diablo Max where it seems like the shoe is trying to do all the work.

The upper of the shoe gets trumped by the midsole technology in the Tecnica Diablo Max.  I felt the upper has a decent construction make with some plastic wrapping to give the shoe some form around your foot.  The tongue is a little different from other trail running shoes in that it is connected to the shoe on all but one side verses traditional running shoes where the tongue is connected near your toes.  I personally could take or leave this feature.  The lugs on the Diablo Max are well placed and provide ample traction on pretty much any trail type.  My suggestion to Tecnica; scrap the midsole because the rest of the shoe has potential to be a good trail runner with a few tweaks.

While Tecnica makes a number of good products, I feel they completely missed the boat with the Diablo Max trail running shoe.  If you have read up to this point and still want to give the shoes a try, I suggest trying before you buy and head to one of your local retailers that carry the shoe.

For more info on the Diablo Max and other Tecnica footwear, visit www.rei.com.