Generally I can very easily tell the difference between a trail specific shoe and a road shoe, but when I opened up the Asics GEL FujiTrainer 2, I wasn’t quite sure what it was designed for until I read up on it. The bubbly looking midsole and the low, unique shaped lugs threw me off. To be fair though, when I received the GEL FujiTrainer 2 in the mail I wasn’t particularly familiar with the Asics line and I was even less familiar with their trail line. 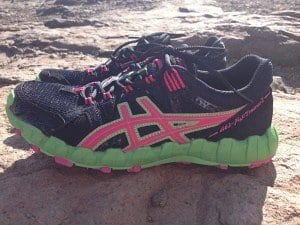 Once I did a bit more research on the GEL FujiTrainer 2, I was pretty excited to give them a go because they had the makings to be a trail runner that I would really enjoy – 6mm drop, medium weight (7.9 oz), and a bit of cushioning.

The main material in the upper of the FujiTrainer 2 is a tough but flexible mesh. The flexibility is noticeable in the toe box, but from the midfoot on the mesh has a fair amount of plastic like detailing reinforcing the mesh making the back half of the upper a lot more stiff. The heel cup is stiff with a fair amount of cushioning around the top of it. The tongue had very little padding, but does feature a lace garage which I found to be usable, but not that easily because the top lace crosses right over the top of it.

The insole is very minimal and does not add much shape, support or cushioning to the shoe at all. The first thing I noticed when I put this shoe on was the lack of any shape or support. There was no noticeable arch and the shoe had a very flat feel almost as if I were standing on a flip-flop. While I didn’t notice the GEL FujiTrainer 2 providing any support, I did notice that the platform felt wide and stable. 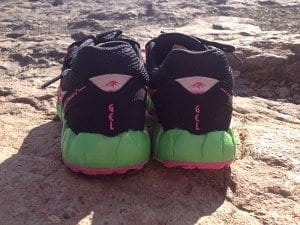 The midsole is a lightweight EVA, Solyte, and has a balloony look to it. While on pavement, the midsole had a pretty flat or dead feeling to it, but once it was on trail it felt more responsive and provided a smooth, easier ride. The Gel heel wasn’t super noticeable, but I think it did suck up a bit of the impact which was particularly noticeable on descents when my heels were taking a bit more of the brunt of the impact. I did not notice a rock-plate, but the midsole was thick enough that it wasn’t an issue even on rocky trails. 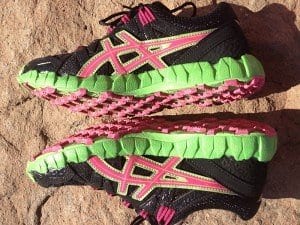 The outsole has a “Y” shaped tread pattern or the majority of the shoe with the bottom of the “Y” pointing toward the toe and square treads near the heel. The lugs are low – a couple millimeters – which allowed for a stable, close to the trail feel. The lug pattern and rubber allowed for solid feeling traction both uphill and down on a variety of trails from dirt to gravel. The tread pattern and give of the rubber outsole really stood out on loose rock where sometimes a deeper lug made of stiffer rubber can be very sketchy. 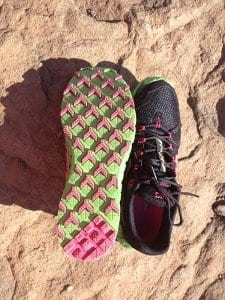 This tread pattern did not lend itself to shedding mud. I picked up so much mud on one run that I could barely lift my feet. It seemed to collect extra thick on the square treads near the heel. Even when I hit dry trail then pavement, I could not get the mud off the bottom of these shoes. I ended up having to spray them down to get all of the mud off.  It’s worth noting that a lot of road and trail running shoes hold onto some of the more sticky mud. 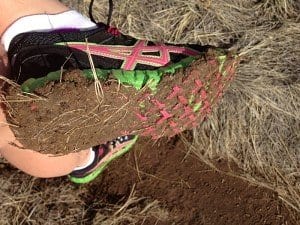 While I felt the GEL FujiTrainer 2 had a lot going for it, I found the fit a bit off. I just felt that there wasn’t a lot of shape to the shoe and it was a challenge to dial in the fit. The toe box is not particularly wide and narrows down quite a bit toward the toe, but still felt a bit loose. The midfoot felt a littel sloppy no matter how much I cinched down the laces. The heel had great shape, but was a little low which compounded the loose, sloppy feel of the shoe and additionally allowed debris to sneak in quite easily, especially when I was running on primarily dirt trail with few rocks. I don’t have an exceptionally low volume foot, but it seems that this shoe may work better for someone with a higher volume foot.

Overall, I think the GEL FujiTrainer 2 has a lot of positive features and for the right foot could be a solid option for running on dry trail. It comes in both a men’s and women’s version and retails for $100.