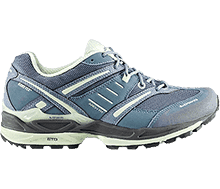 I felt fortunate to be able to test a pair of LOWA S-Cruise GTX women’s trail shoes. Upon first removing the shoes from the box my initial thought was, “whoa, these are kind of heavy for a trail runner.” I wondered if they just felt heavy compared to my street shoes. I even asked my neighbor, a fellow gear enthusiast, for his opinion; while he agreed that they seemed a bit weighty,  he proclaimed the shoes were “super cool.”  I had to agree.  So imagine my surprise when I put the shoes on and my initial assessment belied how the shoes fit. They certainly didn’t feel heavy or bulky; instead they felt like I was walking on a cloud. The shoes felt light and cushioned, very comfortable.

The shoes weigh in at about 1.3 pounds (20.8 oz), which is actually right in the range of other supportive, GTX trail running shoes.  Since they aren’t necessarily heavier than their competitors, perhaps what my hands were noticing initially was the structural sturdiness.  The shoe is categorized as a trail runner on the LOWA website, but the site also states the S-Cruise GTX’s ideal use as ‘fitness walking’.  I tested them as a trail runner more than a fitness walker, and I think this shoe will work just fine in either capacity.

I was especially impressed with the arch and heel support, because I tend to suffer from lower leg aches and pains that, if the support isn’t there, might stop me short on the trail.   I love the gusseted tongue, and am a huge fan of the tough laces. The seams appear to be strong, and I don’t foresee these shoes breaking down quickly. The muted Stone/Lime color combination (your only choice) is neutral and flattering.

I ordered the same size in the S-Cruise GTX as I use for road-running shoes, which proved to be a good fit.  I would say the LOWA S-Cruise GTX runs true to size.   LOWA uses an exclusive female last for their women’s products, which inherently improves the fit and comfort.

The first test was three miles on a graded single track gravel and dirt trail in the local foothills. Nothing too strenuous, but enough to get a good taste of what this shoe has to offer. The tread held well on the gravel, no slippage, and the shoe overall offered very good support. There was plenty of room in the toe box, and I felt like I could flex my foot naturally, without any constrictive binding.  The comfort and confidence allowed me to run more aggressively – I was able to out-run my trail partner that day, who usually smokes me without a second thought.  After the run I felt good, with no signs of aches or pains (thank you arch support).   I also didn’t detect any signs of rubbing, and noticed for the first time the very-ample cushioning around the shoe collar.    When I got home, I compared the LOWAs to other running shoes in my closet, and confirmed that the S-Cruise GTX does indeed have  more collar padding than anything else I own. 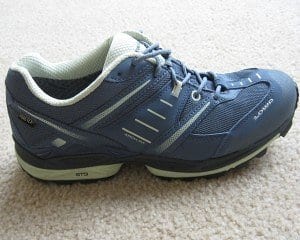 For comparison, I did a later run on an unmaintained trail in a wildlife area, that is a seasonal wetland with some year-round wetlands as well. No hills here, all flatland, but not an inch of pavement or gravel in sight anywhere on this trail. Because the trails are flooded on an annual basis, the ground may be level, but there are plenty of holes and ditches hidden by low overgrowth.  And I’m fairly certain that I stepped in every, single one of them.  Did I mention the Lowa’s are stable?  This trail proved their mettle, and the shoe’s lateral stability helped to keep me upright on the trail, with only minor stumbles, and no ankle turns.  I had great traction on some of the dew-slick grasses and brambles, and my feet remained dry thanks to the GORE-TEX lining.  The S-Cruise GTX even cleaned up well after my workout with a quick hose-down. The outer-upper is a synthetic microfiber blend, and the sole is a Lowa Spine proprietary technology that works with the natural rolling stride of a runner. Even though the shoe is marketed as a trail runner/fitness walker, it is versatile enough that I would wear these shoes for running errands around town.

While this may not be your go-to shoe for trail racing, it is a very stable and well-crafted everyday shoe for people who run and walk regularly on the trails.  Due to its versatility and level of workmanship (durability), it may also be a good shoe to consider for adventure travel.

Lowa products have been around for almost 90 years, first established in Germany.   There is a 12-month warranty offered from the date of purchase on workmanship. The suggested retail price is $160.00.

For more info on the S-Cruise GTX and other Lowa products, visit www.rei.com. 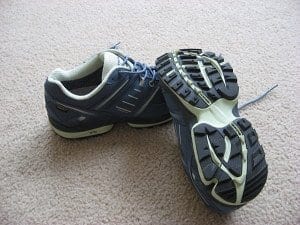