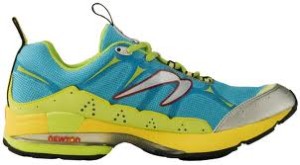 Just so that I don’t have to write this long title every time, let’s start with the name.  Newton Running has chosen Latin names for their models (as would be appropriate for a company founded upon the principals of Sir Isaac), and refers to the shoes also in the English translation.  The Newton Terra Momentus, as it is called, is also known as the “Newton Momentum”.  The “All-Terrain” portion refers to the fact that this is an off-road shoe, and the (are we done yet?) “Guidance Trainer” finale refers to the category within the Newton lineup where this model resides.   So.  For the purpose of this review, I hope you don’t mind if I just call them the Momentum.  Thanks.

I should mention that I have been running on this shoe since its release in 2010, so my review perspective extends beyond what would be a normal product testing period.   I have been running on Newton road shoes since the company first arrived on the market with their patented Newton Action/Reaction Technology.   When the Momentum launched, I was very curious to see how this forward-propulsion technology, designed for natural running, would translate to the trail. 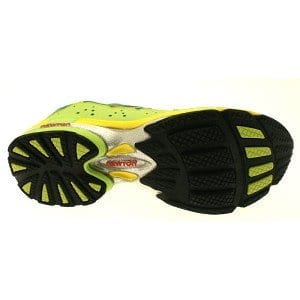 The Newton Action/Reaction Technology is centered around a row of actuators or “lugs” on the sole’s midfoot (above photo: the primary midfoot lugs are black, and the flatter, forefoot lugs are green) .  These lugs press inward when you strike with your midfoot/forefoot, then as your foot levers, the lugs release that energy.  This is the Action/Reaction generated, an idea based on Sir Isaac Newton’s Third Law of Motion.   These actuator lugs are present on all Newton shoes, with minor revisions dependent upon the model’s specific purpose.   When you run on Newton shoes for the first time, especially on a road surface, it is a very strange sensation to land on these protruding lugs.  With proper form, however, the sensation normalizes quickly, and you begin to appreciate the forward kant of being propelled.   (Someone once told me that wearing Newton shoes in a race is cheating.)   On the Momentum the lugs are slightly lower, and, given the additional softness of being off-road, you may hardly notice the lugs at all.  (Note: My assumption throughout this review is that proper natural running form is being used.) 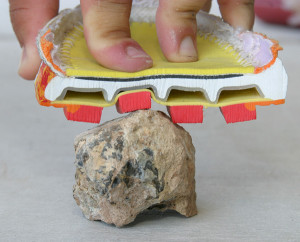 My primary concern prior to testing was whether this lug would create additional imbalance for me on the trail (I say ‘additional’ because I am a notorious klutz and can barely stay upright as it is).  I was afraid that the seemingly reduced landing surface would cause me to turn ankles or otherwise send me flying on anything more technical than a fireroad.   But what I experienced is what you see in the above photo;  the actuator lugs can absorb individually, much like an independent suspension on a car.   This means that the shoe is able to perform very well on flat and uphill rocky surface without causing instability.

My second concern upon lacing up for the first time (remember the klutz part) was downhill performance.  The Newton Action/Reaction Technology is so effective for me on the road, I was worried the forward propulsion would jettison me off the trail.   My concern was valid – the Momentum indeed creates additional momentum, and on the downhill this needs to be kept in check.  I found that the traction could use some improvement as well for downhill running, as the sole just isn’t as grippy as other pure trail shoes.  As a natural runner I tend to increase speed on the downhill by increasing cadence, taking shorter, faster steps.  For me this has been the safest way to manage the forward motion and lessened traction of the Momentum.  When I have tried to blast downhill on the edge of control (don’t tell me you don’t do this too sometimes) it has not ended well.   In other words, if you enjoy running recklessly downhill, the Momentum may not be in your best interest.

The structure of the shoe feels to me more like a road shoe than a stiff trail shoe.  This has both positive and negative implications.   In the positive, the shoe feels light, without being so minimalist that the foot feels unprotected.  Almost all shoes on the market for natural runners are stripped-down, flyweight versions of their siblings, and I appreciate that Newton provides a shoe (both road and trail) with some substance to the natural runner.   Since natural runners have a lighter step, it just feels right to have a lighter shoe (the women’s Momentum weighs 9.2 ounces).   Traditional trail shoes are often double that weight or more.  In the negative, and likely in the interest of weight reduction, the shoe has given up a knobbier tread (as previously mentioned), and lateral stiffness.  While the upper has non-stretch reinforcement and the midfoot/rearfoot has a support chassis, I think Newton could improve upon lateral support, which would go a long way in delivering confidence to run more aggressively on the trail.    The upper is a highly-breathable mesh that is fine enough to keep out the dirt, dust, and sand which is ever-present in my Southern California environment.   I cross a lot of streams in my trail runs, and in the Momentum I run right through, leaving my waterproof-wearing friends to do their rock-to-rock routine.   The water comes right out and the shoes stay light.  The sockliner has terrific anti-friction and anti-bacterial properties, which contribute to the overall comfort of the shoe.

For a trail shoe that comes from road-shoe heritage, it would be logical to question the off-road durability.  So, after having already abused this particular pair of shoes for 3 months, I took the Momentum to the GORE-TEX Transrockies Run, a six-day, 125-mile stage race in the Colorado Rockies, to see what they’ve got.  While most people alternated between two or three pairs of shoes during the race, I decided to test the Momentum on every type of terrain the race served up.   The shoes held up remarkably well, with no outersole chipping, toe cap damage, or mesh tearing, any or all of which I would have expected after such extreme usage.  In fact, when I got home, I washed them up and kept wearing them. 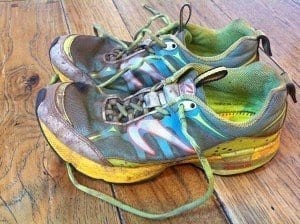 dirty, but no apparent battle scars from TransRockies

Perhaps the best compliment I can give the Momentum is that I not only finished the race in them, I wasn’t sporting a single Band-Aid.  While most racers spent time in the medical tent getting toes and ankles taped before and after each stage, my feet remained injury-free.  No blisters, hotspots, or black toenails, none of the small irritants that can rapidly turn into major suffering on a long run.   The rest of my body was sufficiently tapped, but at least my feet were good to go.  This is because the shoe is built for the running style, is designed for the movement, and therefore nicely conforms to the foot throughout the land-lever-lift motion.   Getting a good fit is important with the Newtons to achieve this level of comfort.

Newton shoes in general tend to run small, and the Momentum is no exception.  I wear a half size larger in Newton shoes than I do in any other brand.  They recommend that you have a full thumbs-width between your toes and the end of the shoe; if you are ordering online, use your current shoes to test; if you don’t already have a full thumb’s width in them, order a half size up when ordering the Newton.  Remember that the sizing is important to make sure your foot is properly centered over the actuator lugs.   I have a narrow foot, and find the width of the Momentum to be on the generous side.  When I lace up my shoes for a run, they are pulled almost as tight as they can go (somewhat apparent in the above photo). If you have a very narrow foot and prefer a snug, enveloping feel, you may not be able to achieve this with the Momentum.  If you have a normal/medium to wide foot, you should not have any issues with the Momentum fit.   The toe box is also amply-sized to allow enough space for the levering action.  A final note on fit:  I often use custom orthotics when I feel flare-ups of an old injury, and I have been able to run very comfortably with these orthotics in the Momentum.  Simply remove the insole.

I recommend the Momentum for natural runners seeking more protection on the trail than a minimalist shoe, and who frequent trails with moderate terrain.  This is a comfortable and durable shoe that can help you to run both better (in form) and most certainly faster.


Newton Momentum Giveaway – sign up by Dec 12 to enter