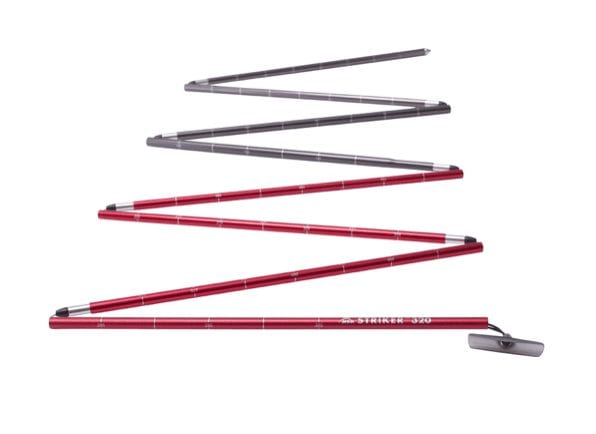 When most people think of avalanche safety gear, usually an avalanche probe is not the first thing that comes to mind. It’s not only crucial to have sturdy probe, but one that is easy to use in critical situations. I have used a couple of different probes over the last few years, but have not had a chance to use any of the MSR avalanche probes yet. I recently got my hands on the MSR Striker 320 Probe and had the opportunity to test it out in the backcountry on multiple avalanche safety training exercises. In this review, I will highlight some of the key features of the probe and how it faired in the backcountry.

The first thing that caught my attention was the shape of the probe. Most probes are the same diameter throughout the whole shaft. MSR decided go away from the typical design and opted for a tapered design. The first 150 cm of the probe is 13-mm in diameter providing maximum stiffness in the critical section of the probe leading to a truer and more accurate probe. The rest of the probe is 11-mm in diameter to reduce the weight of the probe. The MSR team accomplished their design goal with the probe weighing just 13oz or 360g. The MSR striker probe is constructed of sturdy 7075 aluminum, which provides adequate strength and descent corrosive protection. There are markings every 5 cm that are offset for 360 degrees of visibility and every cm has a dashed line for further accuracy. 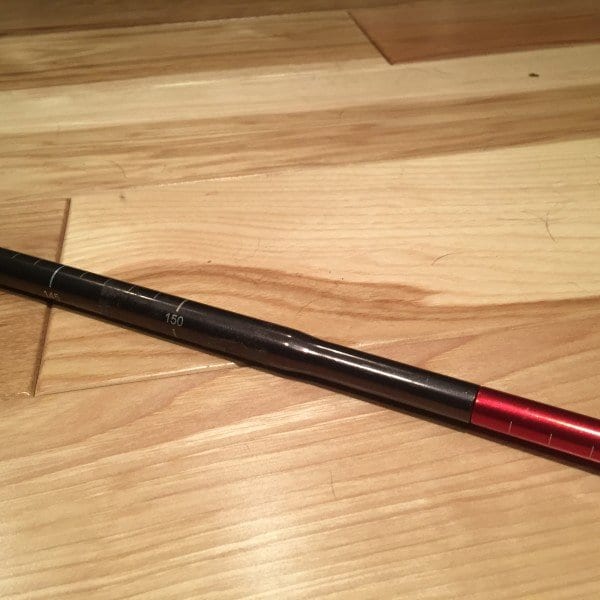 One key feature that is crucial for avalanches probes is the ease of deployment. MSR utilizes quick-ferrules and an instant-locking pin which is tied together with a corrosion-resistant coated stainless steel cable with a nice T-handle on top for easy deployment. When deployed the T-handle can snap onto the shaft of the probe keeping it from getting tangled while you search or check snow depths. The last section of the probe offers a textured grip surface for increased grip when your gloves are wet from a day on the mountain. A nice featherweight stuff sack is included with the MSR probe. MSR left the top of the sack open for easy deployment. MSR also offers the probe in a 240cm version aimed more towards backcountry enthusiasts looking for a lighter option. 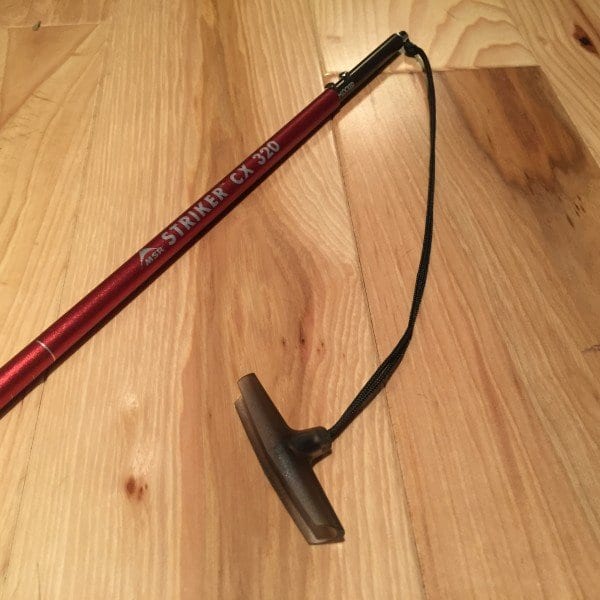 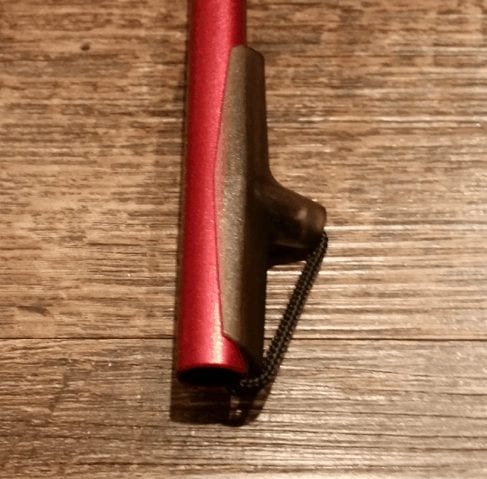 I had the chance to take MSR Striker 320 Probe with me on a few backcountry ski trips over the last couple of weeks. I used a different pack on each occasion, one that had a designated probe pocket and one that didn’t to test the ease of deployment from the featherweight sack. The probe fit nicely in my pack with the designated pocket and I had no problem quickly retrieving it for deployment. 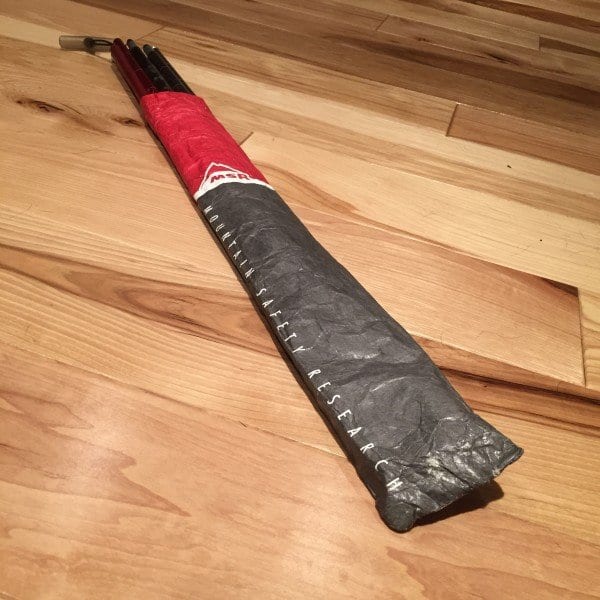 My first impression was that for a 320cm probe it felt nice and light. I have never used a probe with a tapered diameter, making me a little leery if the strength would hold up in harder snow pack conditions. I tested it in a variety of snow conditions from powder to crusty ice layers. The probe held up great and was able to break through the harder snow pack with little effort or flexing. The 360 degree markings on the MSR Striker 320 Probe was a nice feature so I didn’t have to pay close attention to the orientation of my probe. One feature of the MSR probe that I came to like was the T-handle which also clips to the shaft for a clean look. Most probes I have used in the past had a loop handle which also clipped to the shaft but still had the loop hanging there in the way. 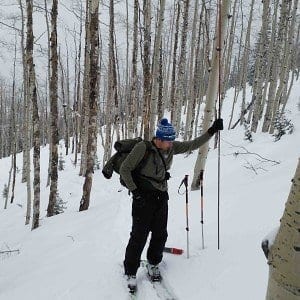 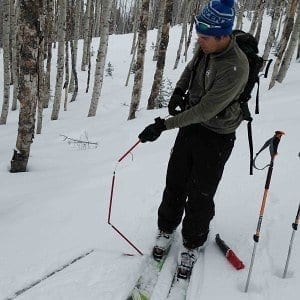 Deployment of the MSR probe was easy and took little effort. The quick ferrules snapped right together making a slight click when it was fully deployed. The instant locking pin held tight while I was using it to test the depth of the snow pack and released with a little press of it after I was done using it. The only area that I wasn’t overly keen on was the textured top section for added grip. I found my gloves slipping whether wet or dry. I actually had better grip and less slipping on the non textured sections. Most probe companies have gone to a similar grip these days. I kind of miss when my probe had more of a sandpaper style grip, it probably was heavier and chewed into your gloves more, but in the end provided me with a better grip. 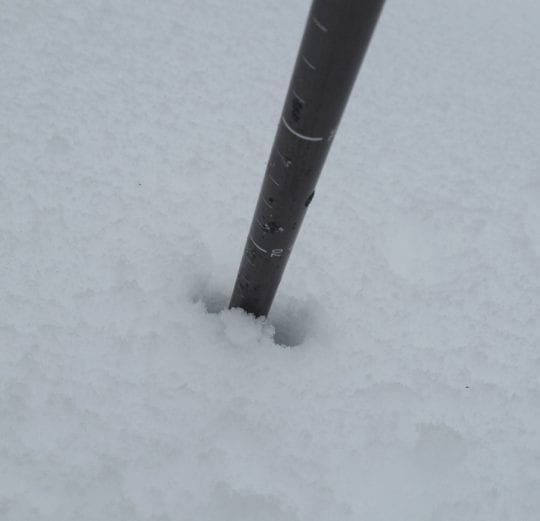 MSR Striker 320 Probe in use

The MSR Striker 320 Probe held up just fine and was comparable to other probes I have used in the past. The biggest difference is the lightweight tapered design. I found the probe easy to use and especially liked the T-handle for rapid deployment. Overall I think this probe is a great option for people who require a long probe or for snow professionals. The MSR Striker 320 Probe would work great in tandem with the MSR Responder Shovel. The probe has an MSRP of $64.95 making it competitive with other probes in its category. If you’re looking for a new probe this winter season look into the MSR Striker 320 Probe; you won’t be disappointed.

For more information on the Striker 320 Probe and other MSR gear visit https://www.msrgear.com/ 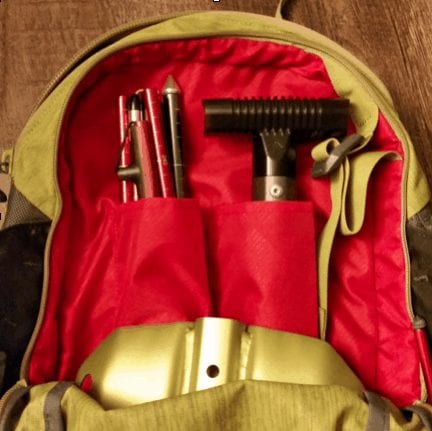 Derick has always had a passion for the great outdoors. Winter is his favorite season and when he isn't working he is either skiing at a resort or touring the backcountry. Even though skiing is his go to sport, Derick also enjoys snowshoeing, cross country skiing, and hiking in the winter months. As the snow melts and winter fades you will find Derick exploring Colorado on his road or mountain bike. Derick is also passionate about fly fishing, camping, trail running and photography.