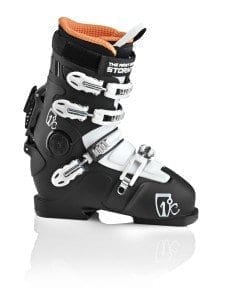 The First Degree Stormtrooper ST2 is a new entry into the ski boots field and is the brainchild of the folks at Icelantic Boards based in Denver, Colorado.  The crew at Icelantic are some of the most passionate in the industry and they do everything they can to make the best gear possible.  With the Stormtrooper boot series, they wanted to put every great aftermarket feature into a solid freeriding shell.  You may recognize the shell from years past as the mold was acquired and not built from scratch.  This first edition of the boot will definitely be improved upon based on feedback from customers and testers alike.  There are two models available of the Stormtrooper.  The ST2 (tested) is the stiffest version and I found it equated to a 110-120 or so in other manufacturers stiffness scales.  The ST1 is a slightly softer version for lighter/less agressive skiers.

Let’s get this out of the way up front, the Stormtrooper is not currently the boot for me but I think many skiers will enjoy it.  The feature set is superb and the liner is top notch.  Let’s start with the liner and fit.  The liner is a custom made piece from a company called DFP and it is the real deal in top end liners.  This is definitely the best liner I have ever tested.  It features a foam that can can be repeatedly molded and will NEVER PACK OUT.  This is a godsend for boot longevity.  The foam molds nicely to the foot and provides a vacuum feel that is desirable on any boot.  First Degree also chose to include a real nice footbed that is not a throw-out like you get in every other boot.  One less thing to buy if you don’t already have custom insoles.  DFP has been making these for a while and knows what they are doing.  Fit note: the toe box is fairly narrow and will have to be punched out if you have wide forefoot.  You also may find that the heel pocket isn’t as tight as you’d want if you are coming from a traditional stiff-flex boot with an overlapping shell design.

The Stormtrooper is designed with hiking in mind and features an excellent walk/ski mode.  A lever at the back of the boot serves multiple functions as the walk/ski mode switch and also a forward lean adjuster.  This is a great feature as you can determine your forward lean on the fly without screws or shims.  For example, if you’re heading into the park, you can set them to a more upright stance for switch skiing and rail sliding.  When you want to get into a more agressive race like stance, you can set them with a lot of forward lean. Cool feature.

Performance: Here is where I have some personal issues with the boot.  You have to adjust to skiing this type of shell design.  It’s similar to Full-Tilt, Raichle, Dalbello and I’ve had trouble with all of those.  The issue is that this boot design relies on skiing perfect modern ski technique where you only pressure the boot/ski with lateral (side to side) movements.  If you’re a big guy like me (196 lbs), you might find yourself feeling a little bit like you’re not being held up the same way you would in a traditional boot.  This probably isn’t as much of an issue for smaller/lighter skiers but it bothered me a bit.  First Degree did do a good job making the boot laterally stiff, which is crucial for high performance skiing.  Another high end performance feature included with the Stormtrooper is a Booster Strap, which is great for getting a good cuff fit and preventing shin bang. I usually add these to my boots and it’s nice to have it come stock.

Overall, I’d say that I would recommend the First Degree Stormtrooper ST2 to smaller skiers who want a great hiking mode and a phenomenal liner.  For me though, I’m going to be waiting on them to perfect the design before I use them as my primary boot.  Knowing the people at Icelantic, it’s only a matter of time before that happens.  The Stormtrooper ST2 retails at fairly priced $649. Find out more at: http://www.firstdegreeboots.com/