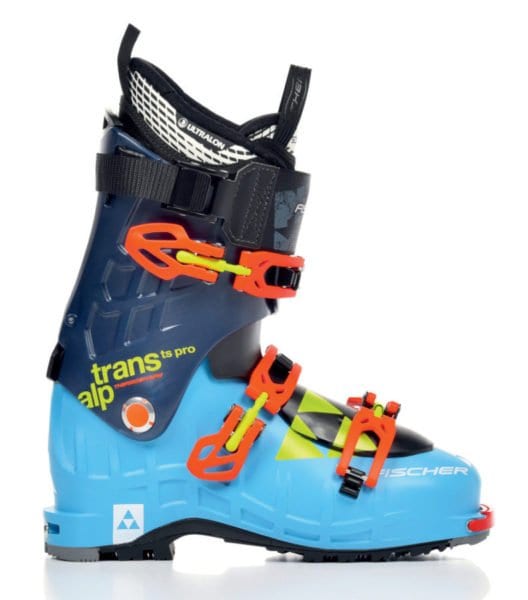 Like most companies, the masters of performance and racing in alpine skiing at Fischer Sports have taken note of the increased popularity of back- and “side”-country pursuits and consequently have put significant effort in to products for this growing market.  Austria, where Fischer is based, is home to a European populace that has long enjoyed ski touring and randonee racing and American skiers are getting more and more interested every year.  The company now has a full line of alpine touring (or AT) gear ranging from fast and super light skis and boots that prioritize the climb to hard charging, heavier setups that can be used for in-bounds days at the resort.  They even offer a rebranded version of the Dynafit Radical ST 2.0 technical touring bindings under the name Tour Classic.  As skiers move from lift-served to climbing-served skiing, there is demand for equipment that bridges the gap and boots are a crucial part of this.  The Fischer Transalp TS Pro was introduced this year as a beefed-up touring boot made to meet the needs of the hard charging and stronger skier without sacrificing uphill performance.  Compared to the existing Transalp Vacuum TS Lite [sidenote: ski companies need to get a grip on their product names] the Transalp TS Pro loses the custom-molding Vacuum shell and adds stiffer TPU plastic and an oversized power strap on the cuff, which combine to give it a stated 130 flex rating.  Read below for my Fischer Transalp TS Pro review. 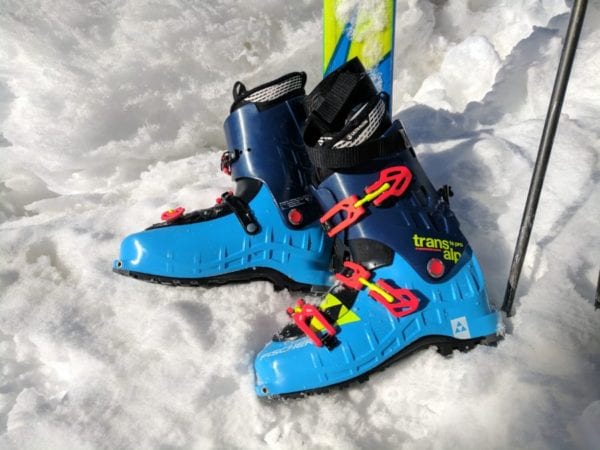 Like most Fischer boots, the Transalp TS Pro has an excellent out of the box fit that is more secure than most.  Touring boots often sacrifice heel hold and leg wrap for mobility but that’s not really the case here.  I was impressed by the secure yet comfortable feeling I immediately noticed when trying these on for the first time.  Like many AT boots, the Transalp TS Pro is built around a somewhat wider 102mm last to give your feet more breathing room on the climb.  Despite the number, I’d put them more in the mid-wide than truly wide category and the volume is thankfully lower in the heel pocket than the forefoot.  I tend to be slightly between sizes in Fischer boots and I did notice the 28.5 I reviewed to be just a little shorter in the toe box on my bigger foot than other manufacturers’.  That said, after heat molding the liner, it hasn’t really been an issue.

Speaking of heat molding, the Thermoshape Tour liner utilizes Ultralon padding in the critical fit areas and I found that cooking them had a really nice positive impact on the fit of the boots, so I highly suggest having this done with your boot fitter at your local shop.   After heat molding the liners and breaking them in on a couple of tours, I can definitely say that the Transalp TS Pro is a great fitting boot with a lot of comfort given its downhill performance focus. 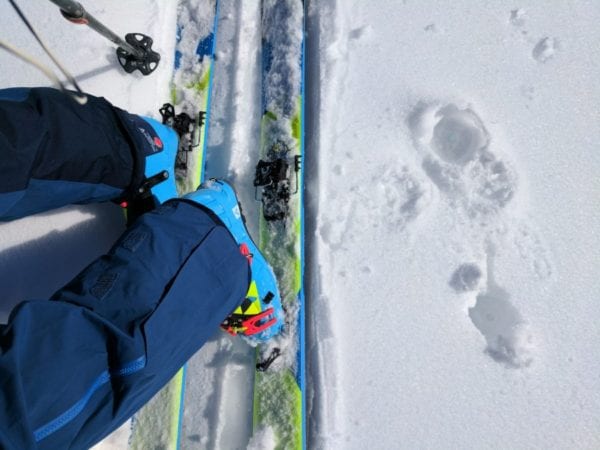 As everyone knows, sports equipment is all about compromises and priorities.  When it comes to boots, you usually choose between a combination of comfort, stiffness, weight, and mobility and prioritize two that are most important to you.  For instance, when I’m picking alpine boots for resort skiing, I sacrifice comfort and mobility for performance in the form of stiffness and a tight fit.  When looking at AT boots, I really wanted something that would be comfortable enough on long tours but not make me scared on technical descents.  The Fischer Transalp TS Pro is aimed at this kind of skier.

Let’s start by talking about the boot’s climbing prowess in hiking mode.  The latch to go from ski to tour mode is a very straightforward mechanism that I was able to operate easily with my thinner gloves.  A simple metal latch is pulled up to release the cuff from the shell and provide a stated 60 degrees of motion.  Coming from an alpine boot with a hike/ski mode, the Transalp TS Pro is a world better at going uphill and I didn’t find any situations where I was longing for more travel.  To get the maximum travel, it is crucial that you don’t latch the top buckle and keep the power strap loose.  I toured in the TS Pro in a variety of circumstances and found they excelled in steeper climbs, in part due to a noticeable ramp angle that put them on the attack.  On flatter traverses, I did notice hiccups in the travel as a result of the stiffer cuff and shell materials and I’d say that the 60 degrees of motion comes with a caveat.  The cuff technically moves that much but it has to be pushed to get there.  It’s really only something you’d notice if you are comparing to a boot that is truly touring-first, skiing-second like Fischer’s Travers Carbon or the Atomic Backland Carbon and those boots are in a different category that makes tradeoffs on the downhill.  Compared to the Salomon MTN Lab, which is a similarly performance oriented touring boot, the TS Pro’s 60 degrees is well beyond the MTN Lab’s stated 47 degrees. 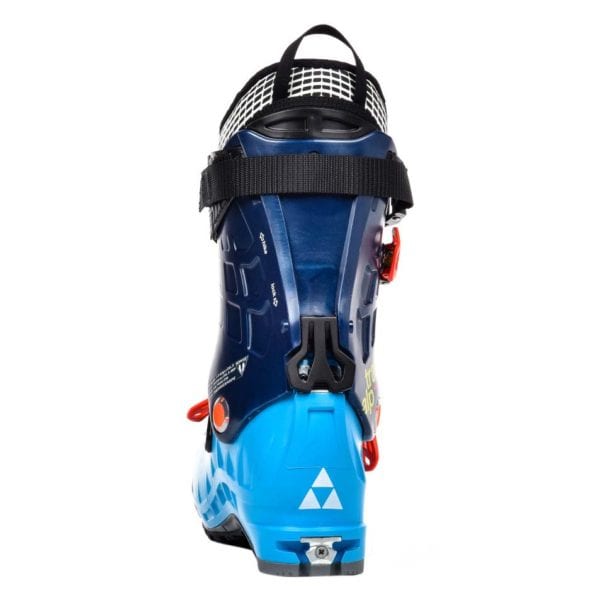 Fischer gave the Transalp TS Pro a really nice full length rubber sole that is grippy and slightly rockered for hiking over rocks and sketchy terrain features.  I found them to be great for walking around to and from the trail head and in the parking lot.  The toe and heel pin inserts are certified by Dynafit and should work without trouble in any pin bindings.  I used them with my Fischer Tour Classic bindings and have nothing to remark on.

A note about weight:  At 1800 grams (per boot), the Transalp TS Pro is not the lightest boot on the market and it doesn’t claim to be.  For light weight, check out the Fischer Travers Carbon that comes in at a scant 980 grams.  However, compare them to something like the Salomon Quest Max 130, which is a downhill boot with a (very limited) hike/ski mode, which are 2250 grams and it’s still a 900 gram savings per pair.  The Technical Cochise 130 is another popular downhill/hiking boot and it weighs 1982 grams.  Salomon’s highly regarded MTN Lab boot comes in at 1549 grams but sacrifices hiking range of motion and foregoes a third buckle for weight savings.

As a 6’1″, 190 lb man who likes really big skis (188 to 193 cm are my go to lengths), I’ve always had a proclivity towards very stiff, high performance ski boots and this has kept me in alpine touring setups that have been focused primarily on the descent.  My current touring ski setup consists of the excellent Fischer Ranger 108 in a 188cm length, which I find to be a great bridge between a dedicated touring ski and a heavy alpine ski, due to its lighter weight [for its segment] and solid flotation and choppy snow ability.  It’s important to understand that you want to match the right boot to the right ski and this is why I’m talking about my ski setup in my Fischer Transalp TS Pro review.  Putting the boot in “locked” mode for skiing involves bringing down the metal latch and finding the hole it goes into and this is relatively easy as long as the boot is flexed to the right spot.  While the locking latch is sturdy and the cuff is strongly attached to it, there is about 1 to 1.5 mm of play in the hole that it sits in when secured.  I can’t say I necessarily noticed this, but it’s worth mentioning.

In order to get a good feel of the TS Pro in varied conditions, I took them up Vail mountain for a half day of in-bounds skiing.  First impressions were that the boot was stiff laterally and had a solid flex for driving the ski but it collapsed a bit if I tried to pressure the tips too hard.  On my first run down a groomed slope, I found that by adjusting my stance to be a bit more upright, I was able to get a pretty good edge grip by pressuring the side of the boot more.  With a narrower ski, I see no problems using the Transalp TS Pro as an everyday boot, especially if you are a little lighter/shorter than I am.  In bumps, the flex pattern of the boot doesn’t lend itself to a great time and that is to be expected since there are tradeoffs when building something that is good for touring. 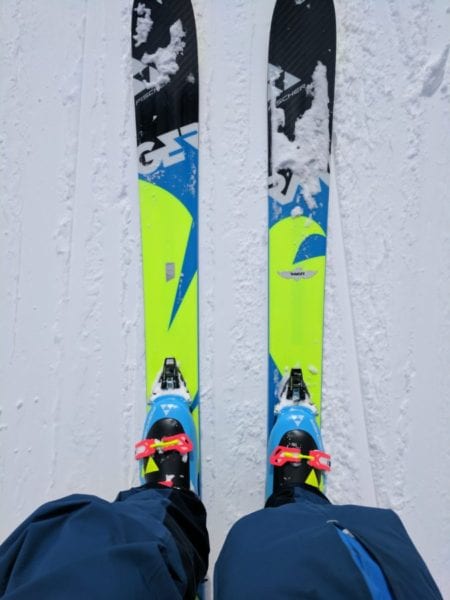 I did a number of tours with the Transalp TS Pro and was generally very happy with their ability. The goal of ski touring for me is often to get to powder stashes that you can’t access with a chairlift and I take that into account when judging an AT boot.   In light to medium-weight powder, I found the boots to be very responsive and perfectly capable of steering my 108mm (underfoot) skis.  On a different day, I skinned up through sun-baked snow that had gotten a bit heavy and crusty and this was a good way to see how the Transalp boots worked when pushed.  What I found was that while I definitely wasn’t as comfortable skiing them in these conditions as I am in my alpine boots (Fischer RC4 130 and Lange RX130), I wasn’t worried about being able to make maneuvers as needed.  I’d describe the feeling as a split second delay in response that I quickly compensated for by timing my edge release a little differently.  Overall, I can say this boot skis very well given its uphill chops and I think that average sized people would find it to be an even better performer than I did.

The Fischer Transalp TS Pro is an excellent option for skiers looking for a touring boot that balances great climbing ability with solid downhill performance.  The out of box fit is exceptional and the liners are very comfortable once heat-molded.  Touring ability is really good for the category and offers a wide range of cuff movement, rockered rubber soles, and an easy to use hike/lock mechanism.  While it wouldn’t be my first choice for an everyday boot for both inbounds and backcountry days, it could very well fill this role if you are on the smaller to medium size (5’4 to 5’10”) or use a smaller ski in the 90mm (underfoot) range.  The boots keep up in a range of skiing conditions and are perfect in the powder we all search for while alpine touring.  If you’re looking for something a little lighter that isn’t as stiff, check out the Fischer Transalp Vacuum TS Lite and if you want something that is more focused on the uphill than the downhill, the Fischer Travers Carbon is another option.